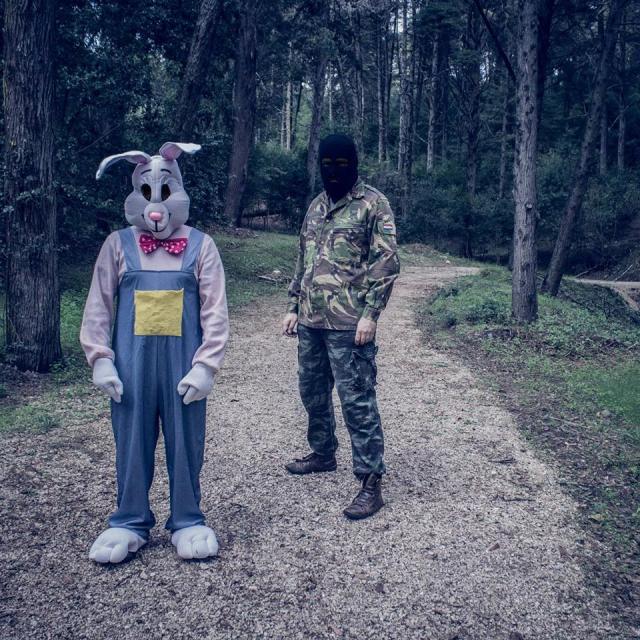 Supposedly “A bizarre and unlikely alliance between one mad hunter and a dangerous rabbit gave birth to Pink Pussycats From Hell, a power rock duo formed decades ago just outside Hellsinki, not the capital of Finland, but a remote village buried deep in the forests of Portugal.” Whatever the origins, Pink Pussycats From Hell is a highly enjoyable invasion of the senses casting raw and scuzzy rock ‘n’ roll trespasses which only leave a want for more.

Debut album Hell-P growls and roars with abrasive lo-fi and viscerally raw sound, spreading blues and garage rock toxicity into the primal heart of their music and listener. It is fair to say that it is a challenge which is not going to be for everyone but whether the duo of guitarist/vocalist Mighty Hunter and drummer/vocalist Danger Rabbit simply wore us down or there was an instinctive appetite for their ballsy invasion of sound, by its close on just the first listen The RR was swinging and throwing itself around like a beast in heat.

Creating a caustic sound bound in essences recalling the likes of The Stooges, The Cramps, In The Whale, and Jackson Firebird, Pink Pussycats From Hell introduce themselves with Hello on the album, a fuzzy spillage of blues rock ‘n’ roll prowling the senses as vocals provoke attention. Initially subdued, rhythms soon become a punchy provocateur alongside the molten melodies and scavenging riffs of guitar.

Beats make a far livelier incitement in the following Hellmet, its blues rock straight forward but with the unpredictability which is swiftly revealed as a potent ingredient across the album and the Pink Pussycats From Hell sound. The song itself is a highly satisfying proposal if lacking the persuasion of the first or indeed of Hellga which follows which brings a smile to the face to match its own mischievous grin. The track is charred punk ‘n’ roll blessed with increasing irritability and bracing infectiousness which inflames ears and appetite ready for the even more heated and addictively enjoyable blaze of Hellvolution.

Through the baked or should that be half-baked stroll and declaration of Hellbow, the crunchy stomp of Hellephant, and the electrified blues blaze of Hellectric, the album continues to tempt and share more manic traits to its increasingly captivating character. The last of the three is equipped with the most irresistible hooks and pleasing rock ‘n’ roll cantankerousness subsequently matched in its individual way by those within Hellvetica, both tracks lava-esque rock to sear the senses.

Hellicopter pleases with its blues spiced garage punk assault next though it offers teases of mouth-watering enterprise and striking elements rather than actually releasing them to frustrate a touch. Its successor Hell Dorado is built on the same crazed imagination but is far more open as the track builds its schizophrenic rock ‘n’ roll but it too lacks the potency of earlier tracks though the sweltering Latin/mariachi hued melodies later on just hit the spot.

The next pair of tracks leaves ears and passions truly alive. Hell is Regina is first and unleashes a slice of dirty punk rock which just stays with the listener for hours after. A rousing celebration of personal differences with a snarl in its gut, the track is pure rock ‘n’ roll virulence you will find dancing around your head for ages after, especially its participation seizing chorus. Hellzheimer is the same in its own way, grooves and rhythms a familiar but rapacious invitation ridden by the pair’s catchy vocal trap.

The duo brings the album to a spirit inciting close with a raucous cover of the Berry Gordy and Janie Bradford written classic, Money (That’s What I Want). It is a galvanic senses roasting version ensuring Hell-P ends on another high, the listener too with an eager taste for the Pink Pussycats From Hell devilry in place.