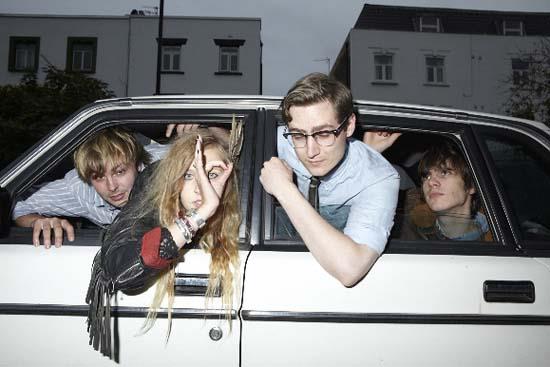 Instantly enamoured by and in love with the single Out of the Water from UK band Native Roses which was released a mere few days ago as a teaser for this their forthcoming EP, there was no holding back when the chance to fall within the arms of said release came immediately after. Released July 16th the Colours EP is a glorious continuation on the passion and emotion seeded by the single. Containing four songs which light up thoughts and senses like a burning sunset, the release leaves one immersed in a caress of melodies and harmonies brought by uplifting sounds borne of touching and incisive songwriting.

The Brighton based folk rock band, to find some kind of tag, formed out of the band Modern Fighting Vehicles. Initially

Native Roses alongside James Knaggs, Jacob Stevens, Moses Bogarde, and Jessica Illsley, also contained Jasmine Bogarde the sister of Moses, now better known and successful as Birdy. As her career took off she left the band whilst as the new release shows Native Roses grew into something rather special themselves.

Released on Creek Records, the EP was created alongside former Roxy Music member Guy Fletcher and multi-platinum songwriter and Dire Straits founding member, John Illsley. More importantly it sets Native Roses as one of the most inspiring and imaginative bands to emerge recently, their charm and emotively striking sounds destined to captivate and mesmerise all hearts whatever their genre preferences.

The title track opens up the release with an ear stroking blend of lone guitar and male vocals which makes for an instantly absorbing start especially when female vocals paced by a velvet bass notes joins the affair. As the song spreads its embrace the band draws senses, emotions and heart into a vibrant blazing sun of inspiring melodies and harmonies fused with striking and perfectly textured sounds. As the track departs the urge to fall into its arms immediately again rather than delighting in the other songs is almost overwhelming, though by its end that is repeated on every one of the treasures with Colours.

As much as the other tracks are excellent the aforementioned single Out Of The Water still leaves the deepest pleasure and its presence within the EP only raises the already heated temperature to a dizzying height. In the single review we did of the song we compared it to a heated hybrid of Chris Isaak, Dennis Hopper Choppers, Mariachi El Bronx, and Arcade Fire and in hindsight that is still the most apt description. Like a walk through a Summers day in the West under a hypnotic eager sun the song is a weave of beauty in sound and voice. The dual male and female vocals leave one swooning in their majesty whilst the contagion of sultry and sublime sounds is nothing short of magnificence. By its end you easily find yourself wiping the beads of sun drawn perspiration from the brow having been pulled fully in to its world.

Jungle Moon Ballad brings a change in energy as well as showing the strong variety to the Native Roses sound and songwriting ability. It moves carefully through the senses in reflection and reserved passion reminding of the heart driven sixties epics from the likes of the Walker Brothers and Roy Orbison. Whether you call it folk, country, or Americana the song has a persistent pull upon the heart as its dawning emotion and resourceful caress leaves warm lingering fingerprints upon the senses.

The EP closes with Reconciler’s Hymn another deeply emotive song which is in no hurry to come to the boil, its initial air a brooding piece of creative grace. As it emerges from its shell the song without entering a riot throws over the ear an anthemic eagerness and irresistible urgency.  As before vocally and musically the band are nothing less than stunning and skilled.

Native Roses is a mighty creature which it is impossible not to find deep affection for. Whether they will consume the hearts of all musical creeds time will tell but the Colours EP is one impressive way to start trying. 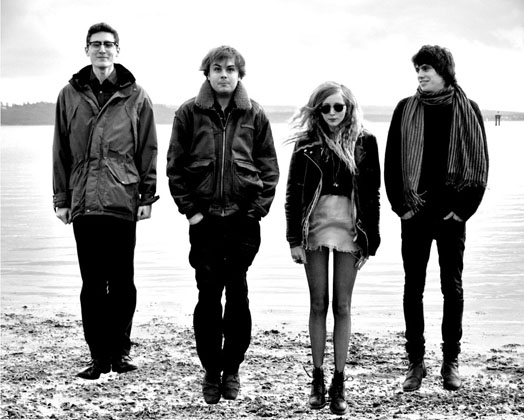 July 2nd sees the rather teasing and convincing invitation to their forthcoming new EP Colours from UK alternative band Native Roses in the shape of initial track Out Of The Water. Released as a free download the song is a delicious and hypnotic welcome into the distinct sound of the band, a quite outstanding and compulsive slice of haunting Americana brought with a disquieting yet mesmeric atmosphere.

Brighton based Native Roses was formed by members of Modern Fighting Vehicles, James Knaggs, Jacob Stevens, and Moses Bogarde. The band soon swelled its ranks with Jessica Illsley and for a short time also contained Jasmine who subsequently left when her solo career as Birdy accelerated. Their forthcoming second EP Colours is released on Creek Records and has been created alongside not only former Roxy Music member Guy Fletcher but also multi-platinum songwriter and Dire Straits founding member, John Illsley. If Out Of The Water is an indicator of what is ahead the EP will be at the very least a definite must do investigation.

The song is a heated hybrid of Chris Isaak, Dennis Hopper Choppers, Mariachi El Bronx, and Arcade Fire. It has a dusty western air to its irresistible sound and mesmeric breath. It opens with expressive male vocals and a discreet guitar strum before opening its weave of warm melodic embraces and eager stirring beats. It is with the addition of simply wonderful female vocals though that the song ignites the biggest flames of passion and impressiveness, the combination of dual vocals perfectly and inventively crafted. Out Of The Water is a sultry stroll across the senses which stirs up the passions and leads one by the hand into an emotive garden of irresistible and heart feeding sounds. It truly is a magnificent song which if the tracks on the EP are half as good will be a sure pleasure too.

Out of the Water will be available for free from the official Native Roses website from July 2nd @ http://nativeroses.com/