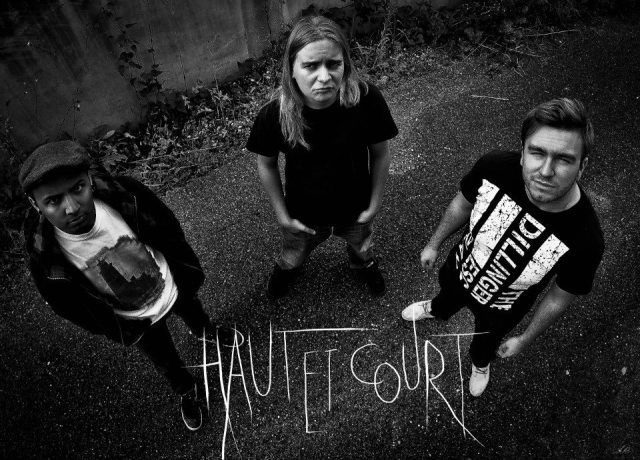 If you have not yet discovered French destructors Haut&Court. then read on to learn about your first essential purchase of 2013. Formed only in June of last year with this their debut EP being unleashed in the closing weeks of the 2012, the trio from Strasbourg has announced themselves with a quite incredible and irresistible onslaught of sonic intensity driven magnificence. It is wonderfully raw and unpolished, a cancerous corruption which uses your testicles, real and imaginary, as a malevolence drawing punch ball and the senses as passion soaked whipping boys. For a debut from a band arguably still learning their craft and way around their sound it is one of the most promising and rewarding releases in a long time.

Consisting of vocalist Arnaud, guitarist Bernard, and drummer Ravind, the band has fused the essences of grind, mathcore, crust, and hardcore to name a few of the flames which heat their sound to create a sonic furnace which is tagged as mathcrust. Whatever title you wish to give it, the music is a compulsive and invigorating abrasion which just sparks rapturous reactions. Describing the release as a mix of Dillinger Escape Plan, Pig Destroyer, Kabul Golf Club, Kunz, and Extreme Noise Terror is a mere hint but the best we can do for this unique and inspiring confrontation.

Let It Burst sets to upon the ear and beyond first with its sonic squalling, corrosive breath, and vicious growling vocals. Mixing up

its pace and pressure throughout, the song is either gnawing away at the synapses with tight insidious manipulation or pummelling with a tempest borne energy and might. The track in hindsight is the mere appetizer for the violent imagination to follow but is still an impressive and stirring opening for the release.

The raw almost suffocating edge to the production only adds to the strength of the EP, which has its pinnacle across the remaining rages of sound. Krokodil is a sensational infestation of serpentine guitar licks, crushing rhythms, and enveloping erosive energy. The soft undergroove of the song is a sirenesque beckoning from within the scything sonics and ravenous presence of vocals, intent, and simply the song itself, all merging to consume the senses.

The excellence of the song is exceeded by the following This Genesis, a track which is like a rabid beast playing with its victim, twisting, slapping, and slicing it into a bloodied whimpering husk. It is a staggering riot of invention and sound which sucks the breath away and turns thoughts and emotions to a quivering mess. We all know the term noise annoys but here noise is an orgasmic pleasure which is continued with the almighty bruising depths of Colision. Like a tsunami of sound the track overwhelms and snakes into every corner of the psyche and heart. It is a giant brawl of rhythmic malice, guitar mayhem, and vocal spite which triggers every positive acclaim possible especially with its squirrelling hornet nest of sonic nastiness.

La Vie is completed by the aural swipe Life, an avalanche lasting less time than it takes to grab a breath and the final triumph Wasted Time For Wasted Minds. The ingenuity of the EP continues into this last slab of brilliance, its vindictive presence crawling into the deepest corners as it lies on the ear with a richly ominous weight. It is a brutal swamp of intensity to perfectly end a release for which only the highest acclaim can be offered.

With La Vie being just the first introduction for Haut&Court. it is frightening of just how immense the band could become and very exciting. Released as a name your price purchase this is the only way to start your imaginative noise driven 2013.