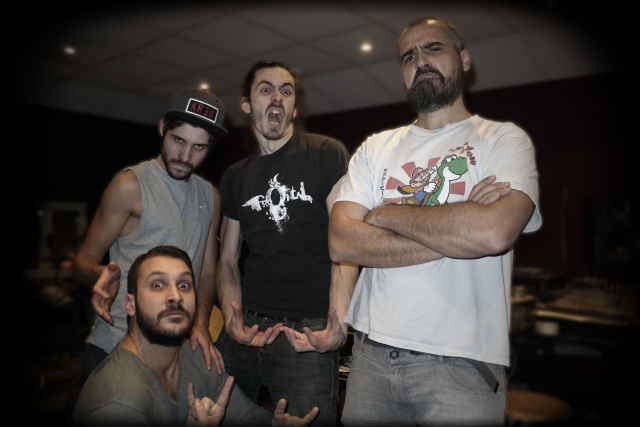 Sometimes a release just stops you in your tracks, presses an irresistibly inviting hand into yours, and pulls the psyche into an undiscovered experience which ignites every pore, thought, and emotion. Such is the case with the unpredictable, thoroughly compelling, and insatiably gripping new Hardcore Anal Hydrogen album, The Talas of Satan. Though their third album it is the first to cross the always eccentricity inspired greedy appetite of the site, which is quite irritating realising we had missed out on the previous sure to be thought provoking creativity of the French quartet. Their new album is quite glorious, an exploration where predictability and assumptions do not even get a sniff of realism in its exhausting inventive tapestry of sound and imagination. It is an unforgettable adventure everyone should experience at least one in their lives if only to show that originality and bold invention is not a dying trait of modern music.

Hardcore Anal Hydrogen was formed in 2009 with the meeting of Martyn Clement (guitar/backing vocals) and Sacha Valony (vocals/keys/flute). A duo in the studio expanding to a quartet with the addition of bassist Jonathan Marole and drummer Damien Salis on stage, the band has released two albums before the new revelation, Fork You and Division Zero in 2009 and 2011 respectively. The band’s sound is a fusion of metal and ethnic music, brewed into rabidly diverse and fascinating ventures in turn soaked in experimentation and imagination. Released via Apathia Records, The Talas of Satan is an eclectic dance of modern and traditional spices thrust through a maelstrom of structural instability and physical might aligned to disorganised invention sculpted with the purest skill and instinct.

Every track on the album is a unique character in presence and sound, making a general description or comparison for the album impossible.

That is a wonderful essence which constantly exploits and ignites the imagination from the opening track Dhamar. Hand drums, possible tablas open up the track, the eastern lure instantly captivating as the thick blaze of metal spawned riffs and pungent rhythmic caging join in soon after. Still merging both ethnic and aggressive counterparts, the track steers ears into a groove and psyche metal escapade which constantly relaxes to flirt with that initial Indian folk tempting. The vocals scratch and scowl as an additional texture to the opening piece, provoking thoughts of Korn whilst musically elements suggest Motherjane and Pryapisme, the last a constant and most accurate relation to Hardcore Anal Hydrogen.

The mouthwatering start is swiftly reinforced by the outstanding Ramahd, a ravenous squall of sonic and hardcore hostility with plenty of sonic and electronic toxicity which again sends the passions into a hectic scramble for more. There is a definite Mad capsule Markets feel to the rawest psychotic aspects of the track whilst the guest scratching skills of DJ Mattéo produces a spice you can find anywhere from Limp Bizkit to The Kennedy Soundtrack for another potent flavour to the virulent contagion. It is a bordering on pestilential treat with rhythms which resonate in their uniquely specific tone, a breath-taking enticement taken further by Release The Crackhead. The track prowls and prances with a posing gait which dances mischievously around the ears, coaxing closer attention for the subsequent unleashing of blackened vocal spite and dramatic intensity. With more shadows and colours to its imposing endeavour than on a dysfunctional TV, the track courts every emotion from passion to fear, seduction to madness .

The following Pentamère is a celestially borne instrumental with twinkling sonics and bubbling expression within its expansive flight. It is a piece of music which at first was not a certain success for ears but once it stretched its warm arms into an oriental sunset with tribal chants and charmed vocals, submission was rapidly given and retained by the following Kalakaka. The storm unleashes a punk metal ferocity, its persistently twisting sonic grooves entwining the senses as the vocals rage with tempestuous expression, again the previously mention Japanese band coming to mind. The track scores and rages against ears and emotions, taking stabs with rhythmic spite and antagonistic riffery whilst vocals torment thoughts and its victim within the climax. It is another song which unveils a new facet and side to the album, as does quite brilliantly Rupack. It isa track which stomps and dances with the imagination through fevered keys and menacing rhythms. Side steps into jazzy avant-garde revelry makes a delicious fuse to the already smiling appetite helping it develop a greater predatory hunger. Imagine a mix of Pryapisme, Cardiacs, Kontrust, and Mucho Tapioca and you get a whiff of the mania superbly offered.

Next up COI rages with chucky riffs and brutal rhythms for another addictive metallic onslaught; guitars scything air and senses with vicious intent whilst bedlamic vocals find a new vitriol to their grazing tones. Once more though there is a wealth of additives which ensure song and experience is one of a kind, just like the very short sonic disorientation which KRR offers, the track psyche/hardcore at its noisy inventive best.

The seemingly distressed passion of 한오백년 probesthoughts next, driven by the equally intense guest vocals of Doowah before Coq au vin strolls in with a big naughty grin on its face and an electro/Nintendo devilry which masterfully teases around the coarse punk vocals and ravenous riffs. It is no surprise at this point to hear the song unlock a bedlam of ideas and psychotic imagination converted to equally deranged sounds, continuing the strengths of the album so far. The song is a beautiful meshuga sparking a rapturous and maybe equally cracked ardour for it.