Proving that the potency and success of their debut EP two years ago was not a flash in the pan, UK pop punks Amberline return with its appealing successor. The Art Of Reinvention carries on where its predecessor left off, with a fresh voice and vibrant enterprise. It does not exactly show a deep evolution, defying its title, but undeniably band and release skirt their boundaries as the band remains one of the most promising British power pop encounters.

Hailing from Guildford, the quintet formed in 2009 and was soon garnering a potent fan base and praise for their energetic thrilling live performances. Debut EP Soundtrack Of Your Life of 2011 sculpted a strong mark for the band within thoughts and British pop punk and laid out an impressive base from which the band went on to support the likes of Attack! Attack!, Kids Can’t Fly, Lost Boys, We Start Partys, and many more to further acclaim whilst their own shows saw them sell out Camden Barfly and light up festivals such as Defest, Step Up Festival and 100% Bitchfest. Now The Art Of Reinvention EP is unveiled and you can only suspect it will continue the rise of the band. It is not a confrontation which takes the genre on a new course or finds Amberline tearing down walls of uniqueness but there is undoubtedly a craft and presence to the release which sets them apart from most similarly spiced bands.

The thumping stride and heart of I’m A Grower, Not A Show-Er opens up the EP, rhythms rolling out their sinews and guitars bringing 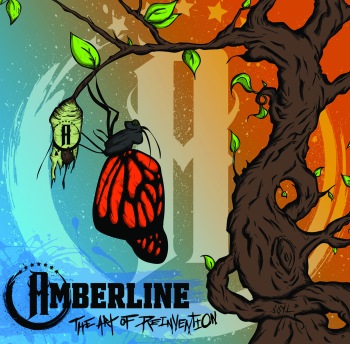 sonic caresses to ears and air. With the vocals of Mark Steggall, ably backed by those of bassist Jack Morris at times, unveiling their narrative the song relaxes into an eager and firm companion, riffs keen to make an impression on the passions with fine invention whilst the rhythmic potency of song and band cage in the senses with a predacious intensity and hunger. The closing group calls are too predictable to truly work but they do not take away from a strong and pleasing start to the encounter.

The following Years Gone By without reaching the same heights still continues the rich bait of the sounds and release, the drums of Rich Hemley commanding and veering the lip of brawling whilst Morris skirts their antagonism with his own rapacious energy and bass temptation. The stalking nature of the combination makes for a captivating call from the song overall which is soon matched by the more than decent The Lost And Hopeless. The guitars of Nick Blair and Rob Rees carve out a dramatic and enticing presence for the track, their mix of melodic and almost primal invention an enthralling and carnivorous provocation which seamlessly fuses musical extremes and intensities for another pleasing call upon the ears.

Things are truly ignited though as When All Else Fails stomps into view and the passions. The guitars conjure up an opening lure when is almost Generation X like in its hook and retains a strong voice as the rhythms again storm the barricades with a heavy towering impressive presence. Into its slightly bruising stride the track lurches and charges with craft and passion which leaves the previous couple of songs slightly pale in hindsight. A fiery pressing of thoughts and senses, the track is itself surpassed by the excellent Here Comes The Colonel, easily the best track on the EP. Once again the rhythmic skill of Hemley lead the way into the heart whilst the riffs show no restraint in making military strikes against the ear before the song expands into a melodic and sonic emotive battlefield. The vocals and harmonies flare up perfectly against the sturdy hungry stalking from the song to only deepen the enticement, so much so that when in league with the imaginative intent and sound of the song it emerges an anthemic triumph.

Closing song Fingers Crossed ensures that The Art Of Reinvention EP ends on a high, the track an appetising burst of adrenaline and melodic thought which without challenging for top honours on the release leaves a healthy appetite for the band and a return to the EP. Amberline still do not stand truly apart from the rest and occasionally there is a spark missing from songs to ignite the emotions into a fire of passion, but leaving a want and hunger for more of the same it does not do much wrong it has to be said, and for fans of the likes of New Found Glory, Blink 182, and Four Year Strong it will be a flavoursome morsel indeed. 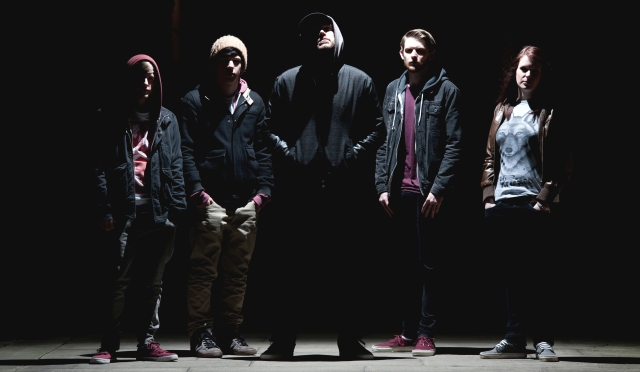 Bringing a much needed muscular invention to the genre of pop punk /melodic punk, UK band Fly This For Me unleash their debut Making Shadows EP to excite and enthuse the ear. Well crafted the four track release is brought with a punk hunger driven by an expansive rock energy and intelligence to incite not only an immediate strong impression but also formidable promise for the future.

Guildford based, Fly This For Me officially formed in the closing blinks of 2011, with members which have their seeds across the UK. Already with a sound on the evidence of the EP which is fresh and evolved beyond just infectious easy to swallow hooks and unbridled keen riffs, the quintet has persistently lit up stages shared with the likes of Blitz Kids, Feed the Rhino, Lost Boys, Marines, Eager Teeth, fiN, and POLAR. It has been a constant garnering of positive responses which with the national release of the EP on July 16th can only accelerate to greater heights and recognition. The release has already been preceded by the video/single Making Shadows taken from the EP released in April, the sparks of acclaim it inspired ready to burst into full flame with the unleashing of these four impressive songs.

The release leaps into view with the sparkling She Said, its entrance more subdued than rushed to make a warm 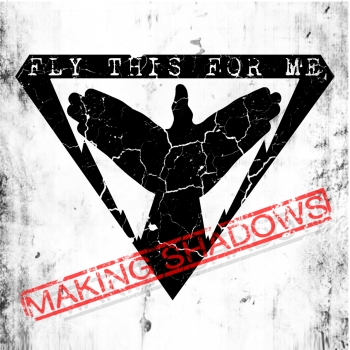 invitation which is lined with stirring riffs and provocative melodic beckoning. Vocalist Tim Cowen instantly marks himself as an expressive and powerful aspect of the sound, his emotive lyrical delivery as appealing as the magnetic sounds around him. The guitars of Sean Kelly and George Rockett light the air with skill and invention to bring a full mesmeric body and incendiary atmosphere to the track. Standing somewhere between the likes of Alexisonfire, Mind Museum and a Foo Fighters/Hundred Reasons like combination, the song is a strong trigger to set the senses up for what emerges as even more satisfying pieces of songwriting.

We All Fall Down takes no time in winding the ear around its hard rock veins of power, the drums of Joe Balchin taking charge from the off whilst the bass of Hannah Greenwood ripples with an intensity which though not always as clearly heard as one would wish adds the depth to make the songs impactful and rounded. The song teases and badgers, twisting with further melodic manipulations from the guitars to fire up the emotions whilst the vocals are as earnest as their delivered content.

Title track comes next and amongst the other unmistakably great songs stands as the best. With a discovered urgency to its breath Making Shadows is a controlled riot with the raw and anthemic edge the best punk inspired songs always have. Fully contagious though again without offering the easy infection of simple hooks and easy to consume melodic candy, the track is a feast of energy, invention, and unreserved heart pleasing rock.

The closing Rock Bottom is equally striking with the band returning to a fuller rock body beneath the hungry air of the song. The track evolves within its wall to be as unpredictable as it is siren like, that infectiousness previously mentioned in full reign here though one more without resorting to the easy pick up lines of other less able bands and songs.

Making Shadows EP is a real pleasure which from its initial impressive introduction grows into a real gem the more one engages their time with it. The release also marks Fly This For Me as a band offering not only a bright and promising future for themselves but for UK rock music too.