Pop punk unafraid to add a raw snarl every now and then, the sound of British rockers Dora Nadine makes for a friendly and rather appetising encounter, a description which also perfectly fits new EP Summer. Containing a handful of songs which as the EP title are full of infectiousness and warm revelry, the release is a thoroughly engaging and magnetic encounter. The fact that it does not over excite and get the emotions as elevated as it might have, feels like a missed opportunity but when it lures a frequent return to its enjoyable presence it is fair to say that it is doing plenty right.

Dora Nadine hails from Anglesey in North Wales, and since forming within the closing weeks of 2012, has consistently made an increasing impression on the rock scene. Debut EP Welcome To Hollywood in the January of the next year, sparked a potent spotlight towards the band from fans and media alike whilst their emerging live presence only lured further eager attention, especially through shows with the likes of Mallory Knox and Tonight Alive last year. As the new EP dances with ears and imagination it is unsurprising to see that influences to Dora Nadine’s sound include New Found Glory and You Me At Six, yet they only add to the appealing and to be fair diverse colour of the band’s sound. Hooks snare the listener at every turn as melodies entwine ears with energetic revelry, and with muscular rhythms aligning to punk bred riffs, Summer is a sizeable, undemanding enticement for feet and pleasure.

The EPs title track sets the party going, a lone riff swiftly igniting a thrust of rampant beats and sonic enterprise, these swiftly punctuated by infectious hooks and just as catchy melodies and vocal escapades from the band. The main lead of Dewi Thomas makes an instant good impression too; his voice holding a tinge of former Hagfish frontman George Stroud Reagan III to it, and indeed across the EP essences of that band, amongst others, also hint away. There is a heavy tenacious energy and core to the track also which works perfectly with the lighter contagion flirting 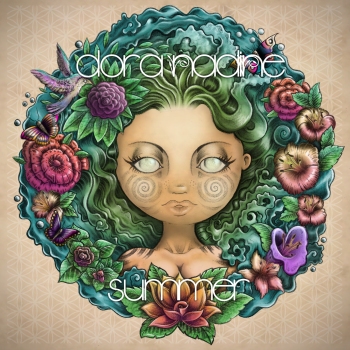 with ears. Imagine CIV around their second album fused with New Found Glory and you get a healthy glimpse of the impressive opener, if not of all of its potency.

The inescapable bounce and infection continues into the following 2 Step, a song similarly sculpted to its predecessor but with even thicker addictive hooks and spicy grooves across an anthemic rumble of rhythms from drummer Karl Hargreaves and bassist Osh Williams. The underlying groan to basslines and the more aggressive scrub of riffs cast by guitarists Tomi Hargreaves and Matthew Newbigging make a great companion and temper to the melodic flames lighting the track, those bred by keys especially tasty as everything from the band combines to enslave body and thoughts.

The beginning to Save Your Breath emerges as one of our favourite moments upon Summer next, its opening melody straight out of The Mighty Lemon Drops songbook. It is a lip licking start to the reflective and lively balladry of the song, an entrance swiftly reinforced by Thomas and the catchiness already laying its hands on ears from voice and rhythms alone. Into its stride the song expands into a more, not exactly predictable, but certainly recognisable premise though it cannot prevent the pop croon from leaving ears fully content and ready for Bow For The Crown which flows right out of it. That continuation means the song again has a similar template to the one before but is soon dousing it with its own melodic wine and rhythmic agitation. It is a mix capturing the imagination but as the last song, surprises are few even if satisfaction is high; that missed opportunity as mentioned at the start applying to this pair of tracks whilst they still make a highly pleasing offering.

Far Too Long bounds in with charm and energy next, at times tempering its initial urgency with a gentle melodic caress though for the main it is a buoyant rock pop romp featuring the outstanding tones of guest vocalist Lily Green alongside Thomas. It is a great union which arguably is not used enough in the outstanding song but a minor quibble soon forgotten as the closing Our Last Scene leaves the EP and listener in strong if again familiar territory. Even with this recognisable breath, the track is a heftily pleasing proposition, raw vocal squalls in the background of swirling melodic adventure and rhythmic confrontation bringing new drama.

There is a hidden track on the release, a version of The Fall which again only has good feelings roaming ears and emotions with its thrilling attributes and appetite for hooks and imposing riffs, not forgetting lofty harmonies. Dora Nadine on the evidence of Summer feels like a band just a few steps away from sparking major spotlights and in creating a release which will seduce all. This EP is a great appetiser in the meantime.

The Summer EP is available digitally now via http://doranadine.bandcamp.com/releases