If there is one thing which In Presents Wake, the debut EP from Scottish metallers Lifelines suggests it is that this is a band you need to see live. The intensity and aggressive energy of the six track release is a formidable hint to what you imagine their stage attack is like, though you suspect it still only touches the edges of their intensive stage presentation. The release is a fiery slab of metalcore rife with strong melodic flames and a voracious blend of rhythmic antagonism and ferocious riffery. The EP does not present Lifelines as the finished article but certainly as a band on a rapid and intensive rise with a sound to match their hunger.

The Glasgow quintet was formed in 2011 by vocalist Paul Bone, guitarist Sean Young, and drummer Jonny Macintyre. After going through multiple guitarists the line-up was completed by guitarist Adam Cosgrove and bassist Murray Paton and by the end of last year had built a strong growing reputation for their live shows which has seen them alongside bands such as Bleed From Within and Palm Reader. With In Presents Wake, the band makes its widest and strongest declaration to date, one you can easily see leading to strong acclaim and a much larger fan base for the explosive unit.

Opener Skyscrapers is an immediate pressure of rigid rhythms and eager riffing ridden by the coarse vocal attack of Bone. A 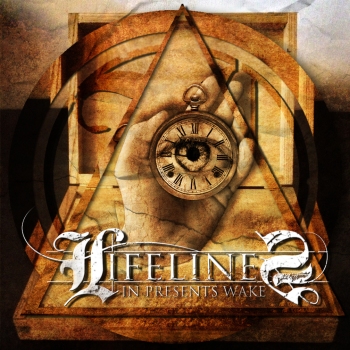 timid but open groove tempts within the intensive atmosphere, the guitars crafting inviting lures into the song’s muscular body. There is a sense of Architects to the track which gives extra texture to the evocative conflict if also showing a distinct presence is still evolving for the band. With an intrigue and invention which is happy to ignore expectations the starter is a riveting entrance into band and EP.

The following Limitless is equally as magnetic without completely waking up the passions, the guitars and bass casting a web of enticing imagination and craft whilst the rhythmic enterprise of Macintyre is a bruising treat driving the track and ultimately release forward. The vocal delivery is a caustic grazing on the senses, a strong and passionate one but with a lack of diversity to Bone’s delivery it does diminish the potency of the track a little, though the incendiary guitar play and group vocal harmonies brief though they are, keep attention and thoughts captivated.

The Protagonist is an uncompromising confrontation from the start, bulging rhythms and a predacious bass prowl increasing the already eager appetite for the release whilst the sinew clad guitar invention without breaking boundaries weaves a cage around the senses and emotions which is lasting and satisfying. The EP from its strong opening does get better and more impressive song by song with this a definite marker to note, though after the brief and accomplished torrent of passion Better Left Unsaid, it is surpassed as the EP unleashes its finest moments with firstly Undertow. It is a heavily intensive tempest of enjoyment and incitement, riffs and rhythms a rapacious courting of the senses whilst the melodic endeavour paints their canvas with creative hues which ignite the imagination. The employment of cleaner vocals alongside the harsh scowls adds the extra exciting finish to the track; the earlier slightly wanted variety here alive and proving how well it works to help make the song the best and most potent encounter.

The closing triumph Silver Screen Synthetic is equally as inventive and exploratory to leave the promise and strengths of the band a raging and wholly persuasive lasting impression. Adventurous without losing sight of its intent and eager to mix things up rhythmically, melodically, and vocally, it is a contagious addiction breeding slice of brutality to complete an impressive debut.

It is fair to say that In Presents Wake does not offer anything new and that Lifelines have yet to stand out from the other strong elements of the crowd but equally it is easy to suggest that it will come, especially on the evidence of the final two tracks of the release. Though even these songs cannot hook a lingering connection once departed, in their and the band’s company they make a convincing and attention grabbing persuasion to make Lifelines a band to keep an eager eye on and definitely to catch live. 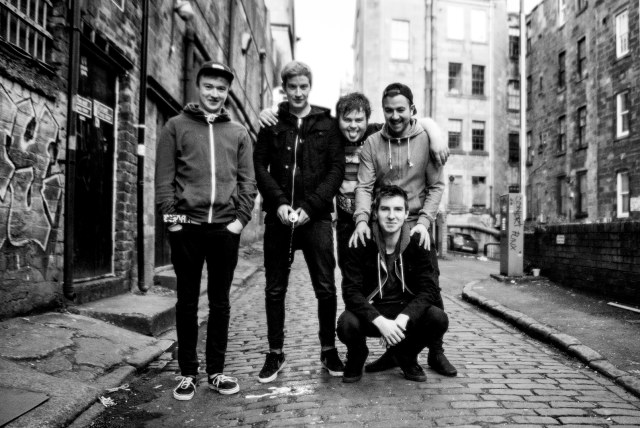 SCOTTISH METAL COMBO LIFELINES NATIONALLY RELEASE DEBUT EP!
Glaswegian metal outfit ‘Lifelines’ are rapidly etching a prominent name for themselves. Dishing up ear shattering shows that clearly mark their intention and convey their manifesto, the rising quintet are poised to hurl themselves into the national arena, ready to annihilate every sweat-pit venue along the way.
Spawned in the back streets of Glasgow, Scotland, Lifelines were formed in 2011 when old band mates Paul Bone (Vocals) and Sean Young (Guitar) recruited Jonny Macintyre (Drums). The trio soon started to write and rewrite as they began to flesh out the bones for their very first record and set list. However, the early days of Lifelines posed its challenges; the band went through six guitarists in their first year, could only afford to rehearse in Jonny’s front room, had no microphones for vocals and had only a make shift drum kit without any cymbals! But through sheer dedication and gutsy drive, the three piece pressed on, and by happenstance, they stumbled into Adam Cosgrove (Guitar) while frequenting a bar in the city; the four instantly clicked and Cosgrove joined the ranks. It wasn’t too long then before they drafted in Murray Paton (Bass) to finally complete the unit.
By the end of 2012, the aspiring five piece began to truly solidify, picking up solid underground acclaim, and scoring a feature in Front Magazine’s New & Unsigned section. The band continued their climb by hitting the road, playing throughout Scotland and supporting good friends ‘Bleed From Within’ and ‘Palm Reader’ along the way. Lifeline’s shows are now fast becoming notorious for their intensity and full-hearted delivery. The Metal crew will tour again this Autumn in support of their debut record ‘In Presents Wake’.
The band’s debut EP ‘In Presents Wake’ is stuffed to the gills with blistering riffs and pounding beats. Lifelines have pulled down their live energy to tape and the EP perfectly captures the band as they are best heard: live and in your face. From the unbridled ballsy vigor of ‘Subcitizen’ through to the vicious drive of ‘The Protagonist’ and the ferociously rifftastic ‘Silver Screen Synthetic’, ‘In Presents Wake’ is a record that showcases Lifelines as a sure-to-be prominent force in the UK metal scene.

If of a sensitive disposition than stay clear of the new self titled EP from hardcore/metalcore band In Place Of Hope. Though it does not neglect the melodic and cleaner side of metal it first with no compulsion to be nice obliterates defences and stretches the ear to extremes. It does at times with an out stretched hand offer to pick one up again but only to allow it to knock ten bells out of its victim all over again. The release is a formidable trio of songs which whilst not turning over new rocks for the genre kicks them around the place with impressive skill.

Formed in 2010 down  in Southampton, the quartet of Matt Dennison (Vocals), Russ Barnes (Lead Guitar), Rob Arthur (Vocals/Guitar), Dave Sands (Bass), and Mike Hill (Drums) took an inspiration influenced by the likes of Parkway Drive, Bring Me the Horizon Alexisonfire, and Killswitch Engage and twisted it into their own aggressive and impressive sound. 2011 saw the band matching and upstaging the likes of Evita, Giants, Odessa, Despite My Deepest Fear, and Brotherhood of the Lake in gigs across the South of England, all the while accumulating strong respect and notice further afield. With the release of their EP it is hard to imagine they will not be taking larger and swifter steps up the metal ladder as more fall beneath its thunderous might.

Obviously not a band with an ounce of mercy or desire to take it easy on people within them, In Place of Hope attacks

the senses like a tornado from the off with the brilliant Lifelines. The song instantly became a favourite for song of the year with the barrage of violent drums and monstrous riffs that leaves one shell shocked. Many songs do this but once the sinister infectious groove begins to wind itself around the heart, the satanic growls spray venom with every syllable and the clean vocals swarm eagerly all over the debris, the song rises to majestic and impervious to complaint. The drums stomp all over the senses with obvious delight whilst the guitars play with the damaged goods left and it is so satisfying. The song has everything to make it a permanent fixture in all metal hard hearts and sets the band alone ahead of the plethora of emerging metalcore bands.

After such an impressive start there had to be a drop in levels or even intensity. Maybe there is but it is hardly note worthy, the remaining explosions of Bridges and Dark Roads & White Knuckles more than capable of holding their own. The first opens with just clean vocals and guitar to bring a frown but within a few breaths the song erupts into more splintered intense riffs and captivating melodies. The mix of growls and clean vocals favour the latter more in contrast to the opener but the band brings them both together in a defined and seamless mix which many bands struggle to understand or do. The song as does the latter of the two shows the expansive sound and ability within the songwriting and vision of the band and though no song offers anything brand new to leave one awe struck you know it will come, that In Place Of Hope have all the armoury and creativity.

As Bridges closes with sparkling melodic guitars winding down, Dark Roads & White Knuckles muscles its way in with stirring riffs and commanding rhythms. The show is less brutal than the opener despite the bitterly harsh growls, well that is until the band cannot hold back any longer and unleash a thunderous assault bombarding the ear with heavy artillery that breaks knees ability to stand. Once out of their system the band resumes the original intent the song started with, again it is seamless and the switching back and forth exhilarating.

Lifelines may lead the way and set the pace on the EP but overall it is an impressively solid and deeply satisfying release that ensures In Place of Hope have the attention of everyone.