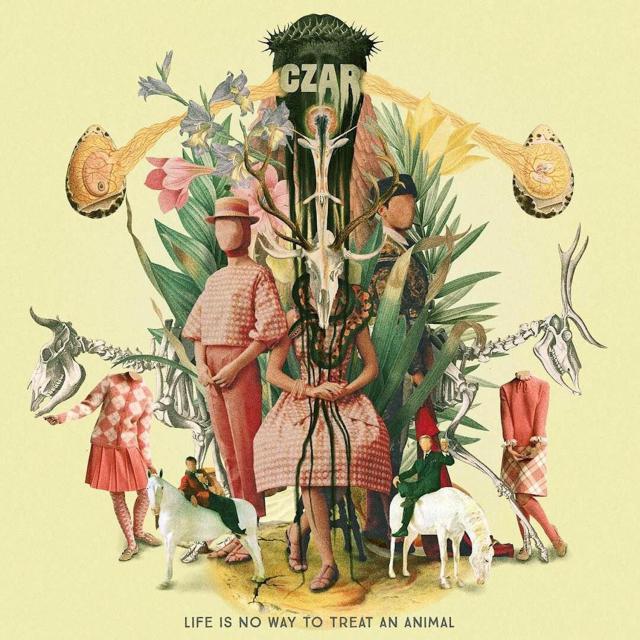 Finding something which stands out from the crowd let alone presents something truly unique gets harder and harder but Czar and their new album Life Is No Way To Treat An Animal easily tick both boxes. Creating a compelling experimental, bordering on psychotic, brew of sound bred in the raw essences of anything from progressive metal, hardcore, and grind to mathcore, post punk and more, all woven with avant-garde tendencies, the Tacoma, Washington based Czar infest ears and infect the psyche with relish. Certainly it is a challenge not all will take to, yet every intrusive assault, off-kilter trespass found within their album has an instinctive infectiousness which rewards as it devours. Like a mix of Dillinger Escape Plan, Mr. Bungle, and Psyopus, yet as suggested creating its own individual character, sound and indeed Life Is No Way To Treat An Animal is one of those times when you really feel something special is in the making.

The album makes a subdued entrance with the beginning of Owls, etc; electronic throbs and melodic coaxing a minimalistic but potent lure. Soon the enjoyably strained and captivating tones of vocalist Dr. Landon Jared Wonser join in with lively beats and a brooding bassline alongside. The track is still restrained but smouldering greater volatility in its belly. With the funk of Red Hot Chili Peppers and the progressive lilt of The Fall of Troy laced into its Every Time I Die like swing, the song never does explode and only benefits from that teasing of expectations for a thrilling start to the release.

Too Many Yetis quickly follows; its agitated heart and enterprise a caustic invasion as the guitar of Nicholas J. McManus drizzles sonic psychosis upon the rhythmic battering of drummer David Joseph Dorran Jr. and Peter Joseph Ruff’s throbbing bass meandering. Its brief but potent escapade further whets an already awoken appetite before Arachnochondriac casts its unhinged waltz on the senses, guitars a web of irrational melody and bass a roaming grumble as the keys of Christopher Duenas intensely sizzle. It is a frenzied ear twisting affair as magnetic as those before it with its unstable yet skilfully nurtured trespass.

Antelope Mask steps to the fore next, it’s extremely short hunt the perfect appetiser for Beware the Flies, Orestes and its unleashing of a post punk woven landscape littered with cold stabbing riffs, steely grooves, and vocal predation. The eye of its tempest sees keys sharing a classical beauty as harmonies float behind the corrosive squalls of Wonser, the combination as riveting as it is enjoyably testing as it leads ears into the Latin kissed melodic festivity of Vultures Never Eat In Peace. This is a hot bed of unpredictability and cracked emotional turbulence hugged by the toxic sonic craft of guitar and the perpetual imposing enticement of rhythms; drama soaking every twist, sinister deceit each throat spewed syllable.

With a psychedelic lining, The Worm Enters the Moon prowls the listener next, its theatre of sound and imagination sharing attributes found in UK band Japanese Fighting Fish and indeed Dillinger Escape Plan. The open variety of the flavours making up the band’s sound and individual songs is already clear and only reinforced by Canine, No Eyes Just Teeth, spoken word nestling in raw lo-fi sound and straight after the ferocious punk and metal bedlam of Shark Cancer, a track suffocating and igniting the senses simultaneously. Its mordant assault is then matched by that of The Golden Calf, its breath scathing and touch scalding yet equally captivating as it fluidly shifts from venomous pattern to corrosive irritability; and even when the movement is more of a clunky sidestep it works perfectly.

Through the creative surf hued snare of Mister Reindeer and the melodic calm of Domesticated Wolves, ears and imagination are effortlessly reeled in with the rest of the body disturbed into compliance by the predatory jazz infested mania of the exceptional first and the poetic serenade of the second. That track is an oasis in the certifiable invention and nature of the album, a gripping dementia fuelling the crumbling climate and emotional erosion of You Were a Comatose Lion and in turn the jazzily bipolar Wine Hog, both revealing an array of crazed facets to their attention demanding personalities.

So often a nineteen track release is sharing a filler or four along the way but there is no such moment within Life Is No Way To Treat An Animal, the celestially bent x̌ʷiqʷadiʔ provoking grateful reactions while Blind Mice provides a bewitching espionage of twisted enterprise and haunted frenzy with interruptions of dark repose with their successors in Prawn and after that RxABBITS invasively exploring and stretching the psyche respectively. The later of the songs is especially striking with its incendiary fusion of raw and composed sonic belligerence.

Concluded by the minimalistic lure of Taking Roadkill to the Vet, a track warming up to the task of seducing the listener with sonic malignancy through every second of its low key but haunting  electronically spun three minutes,  Life Is No Way To Treat An Animal is a rare gem as creatively murderous as it is formidably tempting. Czar themselves are a fresh breath which you will not have to go searching for; their music and talent will do the hunting.

Life Is No Way To Treat An Animal is out now @ https://czar.bandcamp.com/album/life-is-no-way-to-treat-an-animal