The presence of Dutch death metallers AntropomorphiA comes in two parts, a successful period between 1990 and 1999 and second starting in 2009 when the band came back to life after a decade hiatus. Its return has led to acclaim and feverish appetites for the band’s uncompromising and imposingly bracing inventive sound. Just recently AntropomorphiA unleashed new album Rites ov Perversion, a wickedly accomplished and compelling slab of extreme savagery putting a potent spark back into death metal. Eager to learn more about the band, we had the pleasure to grab time with vocalist/guitarist Ferry Damen, exploring the birth and first era of the band, the new album, and connections between certain songs and their author…

Hi Ferry and thanks for sharing time to talk with us.

It is fair to say that the recent release of your new album Rites ov Perversion has drawn even more attention and awareness of AntropomorphiA than ever before; certainly it has been the release opening us up to your dark violently imposing world. How has reactions been for the release and have you felt an increased spotlight from it?

The overall reactions are very positive, from both media and fans. We certainly notice there is a lot more attention drawn towards the band since the release, which is again a positive thing for us!

It is the successor to the well-received Evangelivm Nekromantia of 2012, how and where do you see an evolution in sound between the two?

I think it’s becoming more comfortable within your own sound and songwriting. With Evangelivm Nekromantia we wanted to present an album that after such a long break was a good representation of where we stood musically and could define us. Evangelivm Nekromantia became more groove-based and atmospheric than all our previous work but still harboured those characteristics that defined us. That sound became the spine on which I wanted to grow this new entity. I wanted to refine that sound and draw from a big diverse palette while staying true to some old Death Metal traditions without becoming a copy of the genre. I think what the main difference in sound is the progression, which is an inevitable thing as an artist and I think

Before we look at the new album more closely can we briefly ask about the beginnings of AntropomorphiA way back in the mists of time, well 1990 to be specific. Was there a particular intent and inspiration to the band back then?

We started of inspired by the early Black Metal bands such as Hellhammer/Celtic Frost, Bathory, but when I heard Scream Bloody Gore and Seven Churches the intent became to play raw and uncompromising Death Metal. We were inspired by all the upcoming DM bands that surrounded us, from Entomed, Grave, Asphyx, Death to Bolt Thrower, but not in the sense that we wanted to sound like them.

Has that force behind the band’s creation continued or evolved over time?

I would say it has evolved. When we started out our musical skills weren’t at the level they are now so our early work is more primitive. We evolved as artist and the hunger within this band has grown together with this progression.

Looking back, a relatively successful period for the band led to a decade hiatus, was there a prime reason for the dormancy of the band? 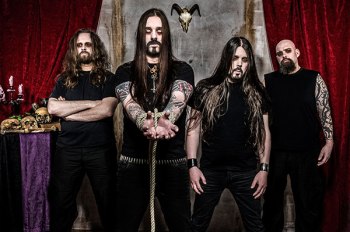 We were at a point where Death Metal had become a repetition and was bleeding out, we weren’t able to book any shows. We parted ways with our original guitar player, who was a very good friend, so that left its mark and our other musical projects got more interest from the outside world. Time became also an issue due to those projects. So we decided to put the band on hiatus.

…And the spark bringing AntropomorphiA back to life in 2009?

When we put the band on hiatus I never stopped writing for the band. So from time to time I would sit and record some of these songs together with Marco (Drums) at his studio. Months would pass and then Marc (Bass) would record his parts, Marco would mix the tracks and we would put some of them online on our MySpace page back then. Every time we’d record or made music together, we’d sometimes rent a rehearsal studio just to play some AntropomorphiA tunes; that spark started a small fire and when time became less of an issue we decided to really feed those flames.

Did you look at the band and the music brewing up inside her differently this second time around or was it simply picking up where the band left off?

The music we wrote within those years of our hiatus showed some progression in our style but when we started writing it was difficult to get back in our skin so to speak. We’ve recorded a whole album worth of material, which had elements of what was brewing inside AntropomorhpiA but it was until after those recordings that the fire started to really blaze.

What specifically consumed the band member’s experiences and careers in that intervening period?

Marco (Drums) and Marc (Bass) where part of a band called Flesh Made Sin and I got involved managing a major act here in the Netherlands.

Back to Rites ov Perversion, would you agree is probably your most vicious yet adventurous album yet?

For sure, I think with every listen you’ll hear it offers a more dangerous sonic ride. A sinister, brutal, violent and emotional ride, layered in a more multidimensional sound.

We also sensed looking back at previous releases that there is an element in its sound that is seeded back in the early music of the band. Is that something you hear and was this deliberate or simply an organic emergence?

These things emerge on a natural way; I think it comes from my style and approach of writing and playing this type of music.

Evangelivm Nekromantia found itself under scrutiny and dislike of the German authorities, leading to its banning I believe. Are you expecting similar attention and reactions with Antropomorphia in certain quarters?

I didn’t get completely banned, it’s an 18 or older type of thing if you want to buy the album. I think they will certainly have a closer look at this album since we became part of their list but we didn’t really think about it or take it into account writing this album. I’ll guess we’ll see how they react to certain things to come (our video for Nekrovaginal Secretions might rub them the wrong way) but until now we haven’t heard from them.

The last album had a continuing theme to its songs, but Rites ov Perversion feels like the songs, apart from a few are more individual and standalone in their narrative. What are some of the concepts and explorations running through the release?

The album is filled with the same thematic occult/gore, mostly consisting of a sinister, diabolic, misanthropic and sexual nature. Crowned in Smoldering Ash is an exception as this song addresses the depressions that have plagued me throughout my life. Inanimatus Absqui Anima is written by a good friend of ours Twan van Geel (Legion of the Damned, Soulburn) which is about the Greek mythological goddess Kore (Persephone) who gets raped by Hades. As a reference to our world where everything will end up getting raped in some sort of form, dies and will end up empty and rotten.

How long was the album in the making and how did the writing process work for its songs and in general with the band?

I started writing on and off from the second half of 2013. It’s a very intense and complicated process at times, so I’ll give you the short version; I write all the music and Marco is responsible for the arrangements. There are times also we co-write/arrange songs.

Jos van den Brand is a new addition to the band between albums, how did that change the dynamics and process of writing and recording Rites ov Perversion to say the previous album?

It didn’t, our writing process has been the same for several years.

Your songs appear to take inspiration from classical and literature bred themes as well as more modern issues. There also seems an intimacy to some of the lyrics, is there a stronger personal element to tracks than maybe initially perceived by us outsiders?

This is the first time I get this question, which means someone is paying attention ha-ha. I’d say it’s certainly the case on Rites ov Perversion, I mentioned the song Crowned in Smoldering Ash, this is the most personal song I’ve ever written but there are more tracks even on the previous album that hold something personal. Although Crowned… is the most outspoken, even though I think if I didn’t mention this, it would not be perceived as that.

Rites ov Perversion also includes a cover of Death’s Open Casket, why that particular song from their arsenal of songs?

Although we are an admirer of the whole Leprosy album, Open Casket is that one song that jumps out for each of us. When we started playing it in the rehearsal room it immediately felt like a perfect fit, since Death was one of the most important DM bands for us we said why not put it on the album.

You mentioned it earlier, the video for Nekrovaginal Secretions from the album; can you give us some hint and background to that?

Well the video is based on the lyrics of the song. We’ve had our second and last day of shooting last weekend and it will be an ode to lesbian necrophilia, and perverted masochistic sexual behaviour. We’re still in the editing process so I can’t say more about it than this.

What will the rest of 2014 going into the New Year have in store for and from AntropomorphiA?

Our bookings agency is focusing on club and festival shows. So we will be able to cast our Rites ov Perversion all over Europe.

Once again a big thanks to talking with us, any final thoughts you would like to share?

Thank you for the time! Check out the album.