An album to get you dancing, thinking, and acting on your instincts, TWISTS’N’TURNS is a mighty reminder that its creators, THE TiPS, is a band you really need in your life, especially if reggae, ska, punk, and funk brings your ears and emotions to life. The third full-length from the German band, it is also their most eclectic and imaginative adventure yet and in turn their most rousingly enjoyable.

Hailing from Dusseldorf, THE TiPS was formed in 2009 by vocalist/guitarist/keyboardist Aljoscha Thaleikis after returning back to his homeland after spending some of his formative years in the United States where he was introduced to styles of music that he was previously unfamiliar with. Having explored the merger of flavours such as soul, ska, reggae and dub with the punk rock of his roots, his return to Germany led to the creation of THE TiPS. The band’s debut album High Sobriety was released in 2011 with its successor Trippin’ unveiled two years later, both to potent success. The past two years alone has seen the trio of bassist Philip Pfaff, drummer Janosch Holland, and Thaleikis play over 130 shows, the sharing of stages with band such as The Mad Caddies, Die Rakede, Ruts D.C., The Toasters, and Jaya the Cat amongst them. Now they are poised to stir up broader and stronger attention with the Alexander Beitzke (Jamiroquai, Ed Sheeran, Florence And The Machine) produced and Pete Maher (U2, Linkin Park, Lana Del Ray Nine Inch Nails) mastered TWISTS’N’TURNS; twelve tracks which swing and stomp whilst taken a bite at issues impacting on all.

The album opens with Birds in Trees, instantly clasping ears with vocal and melodic temptation before showing its sonic and rhythmic muscles. From that wall of energy a mellower but no less magnetic stroll emerges as the song saunters with its reggae bred gait. Thicker eruptions break throughout, grooves and spicy hooks adding to the welcome trespass before things relax into captivating calm again. It is a riveting persuasion, a rich tempting only blossoming further with the distinctive tones of Skindred frontman Benji Webbe who guests on the excellent start to the album. 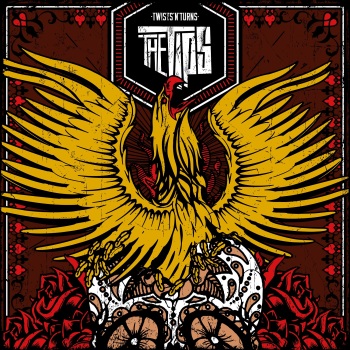 The following Leaving Home gently swings in next, its sultry sway aligned to the thick brooding tone of bass and gripped by the excellent vocal presence of Thaleikis. Impossible not to be hooked by its reserved yet anthemic chorus alone, the song has a By The Rivers meets The Skints nature which simply entices, a success matched by the seductive croon of Wasting Time. Similar spices line the infectious romancing of ears, as too an equally catchy and tenacious energy which soon has hips and voice in eager involvement. Both tracks are irresistible, easy going yet imposingly compelling proposals though both are overshadowed a touch by the outstanding Chosen Fool. Stabbing riffs collude with the grouchy bass to quickly excite ears; imagination and an already keen appetite swiftly inflamed by the Ruts like punk ‘n’ roll invention which also emerges to add fresh bite and attitude to the exceptional encounter.

The band’s punk heart is given full rein for Johnny’s Song next, another striking and virulent arousal of body and emotions carrying an essence of Russian punks Biting Elbows to it. Similarly THE TiPS brew flavours which hint at a Sublime/Living End link-up, but coming up with something distinct and incendiary to themselves. It is uniqueness just as apparent in the infectiously sultry funk infused saunter of If You Want To and the noir lit landscape of City Lights. The first glides through ears with a slightly mischievous enterprise whilst the second is pure aural and emotive drama. From vocals to keys, exotic hooks to the ever pungent tone of Pfaff’s bass, the transfixing incitement is a web of intrigue with a volatility that is seemingly Skindred seeded.

Alien emerges with the same shadowy hues and emotional intensity next, flowing from the provocative shadow of the previous track. It swiftly wraps heavily persuasive and seductive tendrils around ears, at times conjuring a darker climate of intimidation to contrast and unite with the bluesy hued flames also arising from the mellower strains of the slow burning treat of an encounter.

Igniting another devouring of the band’s punk ‘n’ roll imagination straight after, Parade shares a riveting steely bass lure amongst swinging rhythms from Holland, before Do It Right prowls and flirts with its predacious ska punk devilry. Managing to be as sinister as it is irresistibility tempting, the song has body and emotions bouncing, matching all feisty movements in catchy and melodic kind. Equally, it powerfully stirs up thoughts too; an impressive knack the band has leading to full involvement from all aspects of the listener as evidenced by the Red Hot Chili Peppers spiced Back in the Days. There are some songs which are instinctive manna for the soul; encounters which simply turn on the sweet spot for an everlasting romance and this definitely qualifies as one.

Completed by the simply mesmeric, emotive serenade of Still Turning, another song which leaves a lingering imprint, TWISTS’N’TURNS is one thoroughly and imposingly thrilling union between band and ears. It is surely the release to take THE TiPS to the attention of spotlights beyond their homeland’s borders and the underground scene in general, at the very least destined to make a mark on a great many end of year favourites lists.

TWISTS’N’TURNS is out now on Long Beach Records Europe @ http://thetips.de/shop/