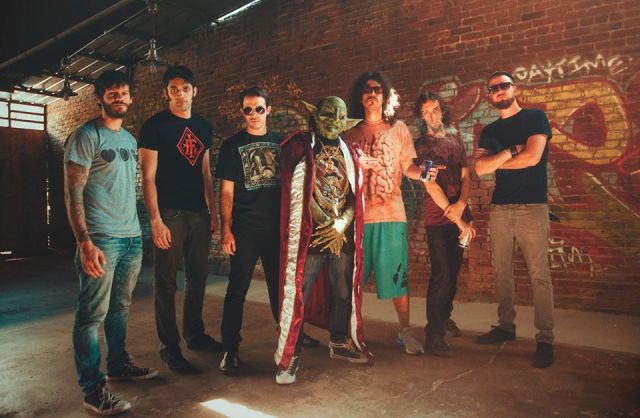 For all those acquainted with and new to Nekrogoblikon and their self-tagged “goblin metal” sound, time to embrace one of the most enjoyable and impressive metal albums of the year so far. You might initially snigger at the band’s goblin themed presence and invention, and you will giggle with the band’s lyrical rascality and self-referential mischief, but ultimately you will come away from one exhaustingly inventive and exhilarating new album basking in metal at its stirring best; you might also just want to be a goblin yourself.

Hailing from Los Angeles, Nekrogoblikon formed in 2006 releasing debut album Goblin Island the following year. At this point the band was just the founding duo of Nicholas Von Doom and Tim Lyakhovetskiy. The line-up subsequently expanded as their sound began evolving as shown by second full-length Stench in 2011; becoming even more openly diverse and exploratory in third album Power two years later. The raw black and death seeded sounds which primarily fuelled their first release, were soon part of a maelstrom of rabid flavours and styles from electronic to folk, symphonic to experimental metal, all colluding to seduce ears and imaginations. The evolution has continued and is now in full blaze with Heavy Meta, the band’s new savaging of the senses. It is a fascinating and irresistible tempest; simply a devouring proposition of flirtatious menace and bewitching voracity.

From opener The End of Infinity, band and album has attention gripped and appetite licking its greedy lips. The song’s initial stride through ears has an electro air to its contagious swing and as it expels further ingenuity and imagination, thoughts of bands like 6:33 and Destrage give a nudge. Keys and hooks only add to the virulent web being cast, the great weaselly vocals of Scorpion almost dancing on the strands of their tempting. A brilliant start only explodes into a greater escapade as guitars cast a melodic weave with tangy hooks and grooves whilst rhythms stalk that enticing with lustful intent. The devilish nature of melodies and enterprise has an additional feel of French band Pryapisme to it, and quite simply everything combined creates aural addiction, an intimidating and fanatically unpredictable shuffle impossible for feet, neck muscles, and the imagination to resist.

The passions are ignited just as potently too, finding further lust as the following We’ve Had Enough with its opening saunter of evocative keys swings in with drama and rampant devilment. Riffs and grooves are soon driving infectiously through ears, vocals spilling the narrative with salacious intent as clean harmonies court ears in the background. The diversity of emerging sound is matched by the great variety of vocals, every second and twist of the song as unpredictable as they are a fluid persuasion. Like a temptress ruffling the love sacks whilst stealing the gold, the track is a salacious temptation leaving ears and emotions on a high ready for the quick step and tenacious revelry of Bring Us More. Jazzy keys, pop bred harmonies, and funk kissed energy are all sucked into the fiery climate of the song’s rabid creativity, once more the likes of 6:33 coming to mind alongside hints of Trepalium and Mr Bungle whilst devouring the unique goblin sound.

Snax & Violence is a more predatory proposal, its blackened heart and melodic death metal voracity a ravishing of the senses. The song though is unafraid to infuse guitar and keys bred beauty into its climatic tempest, adding folkish hues to its grooving simultaneously. It is an enthralling stalking of ears soon outshone by the outstanding Atlantis. The band’s latest single exposes its rhythmic muscle and tenacity straight away, lacing it with scythes of sonic bait as vocal squalls and synth spawned teasing bring their individual persuasions to the rebellious landscape of the song. Like a death infused version of Hardcore Anal Hydrogen, the track is a puppeteer to body and soul, pulling the strings of pleasure before making way for the equally thrilling We Need A Gimmick. Think of a style of music and it is most likely infused into the bedlamic but flowing emprise of a song with something for everyone within and outside metal.

Full Body Xplosion is as grouchy as a ravenous bear and as rhythmically skittish as a dog in heat. Riffs and vocals are similarly fuelled across the volatile storm of invention whilst hooks and grooves offer magnetic toxicity and the keys intrusive seduction. The growl of the bass we will leave for your discovery and nightmares as another pinnacle in the lofty plateau of the album moves over for the raucous anthem that is Let’s Get Fucked. Featuring Andrew WK, it is as riotous as you might suspect and more merciful than you might imagine, with its guest the welcome and Scorpion the venom. Without rivalling its predecessors, the track still has the real world a distant memory in its company and energies ready to take on the caustic and sultry saunter of Mood Swings. Musically the track lives up to its title, each twist bringing a fierce fondling or flirty soliciting of the imagination, everything fully agitated and hungrily unpredictable.

The song Nekrogoblikon brings Heavy Meta to a glorious end; its cantankerous stomp an alchemy of relentlessly catchy rock pop exploits aligned to ferocious hostility. It is a torrent of vivacious turmoil and creative diablerie, just as the album itself. Heavy Meta is easily one of our favourite offerings this year so far and a major incitement for the metal scene, demanding and deserving the fullest attention in return. Now where do you get goblin masks…

Heavy Meta is available via Mystery Box now on CD and vinyl @ http://www.districtlines.com/nekrogoblikon and digitally @ http://bit.ly/1JycbMS