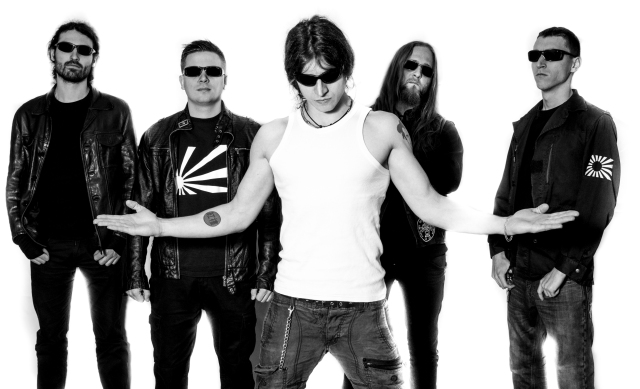 If there were still to be active dance floors after the apocalypse then the new album from French industrial metallers Pavillon Rouge would be the perfect fit for the dark mood and decayed energy it assumedly would possess. A fusion of black metal with industrial/techno bred voracity, the band’s sound and second full-length Legio Axis Ka, make for an erosive and ravenous affair but with a contagion which never leaves the body to simply bask in pestilential depths, dictating its movement across nine pulsating predatory tracks. The accompanying press release also states that their sound and intent explores ethereal 80s new wave atmospheres, and though not always as immediate within the tempests there are elements of the dark wave scene of that era pervading their latest release, scents of bands like The Chameleons, Joy Division, and Pink Industry offering themselves to thoughts. Ultimately though, Pavillon Rouge casts a sound which has its own distinct presence and an album in Legio Axis Ka which constantly and aggressively stimulates ears and imagination.

The band was formed in 2008 by musicians Mervyn and YVH, with the intent to merge black metal with hardcore techno. Highly acclaimed debut album Solmeth Pervitine was released in 2011 and was soon declared one of the best industrial black metal albums. It was followed by shows for the band with the likes of Psygnosis, Himinbjorg, Svart Crown, and The CNK, supporting the album and pushing forward their increasing attention grabbing emergence. Recently signed with Dooweet Records, the quintet of vocalist Kra Cillag, guitarist/vocalist Mu Cephei, bassist E.Shulgin, drummer Sorthei, and guitarist/programmer Mervyn now return with their second onslaught on the senses. Released on the Swamp Records side of Dooweet, Legio Axis Ka is a vicious seduction, a mesmeric violation which however you want to look at it, leaves the senses raw and emotions entangled in its increasingly magnetic tempest.

An immediate embrace of synth beauty amidst an evocative ambience immerses ears as album opener Prisme vers l’odyssée shows its introduction, a potent and atmospheric lure which is soon consumed by a thunderous tirade of rhythms and rabid riffs. Vocally too the song offers a merciless and diverse squall yet within it all the keys continue to cast a provocative and emotionally expressive voice. That industrial element is a nagging incitement within the evolving theatre of guitars and keys too, keeping feet and body agitated as the heart of the track spills its venomous and caustically poetic premise. Lyrically the album is sung in the band’s native tongue so there is little to its obviously dark climate that we can reveal but if the words and premises match the passion of the delivery then it is a brooding exploration just as potent as the sounds around them.

The following L’enfer se souvient, l’enfer sait takes the strong start up another step with its muscular rhythms and riff clad prowling wrapped in an electro hued colouring. The dynamic and persistent techno bred heartbeat of the song again has limbs on alert whilst thoughts and emotions are entangled in the melodic and vocal imagination lighting up the abrasing atmosphere of the song. Track and album definitely need close attention and several plays to unveil all the underlying twists and creative nuances within inhospitable surface and murky air, but it only adds to the satisfaction and drama of the stark, almost visual soundscapes sculpted.

Mars stella patria does not hang about tempting the listener either, electronic percussion and anthemic band roars immediate virulent bait. Their infectiousness seems to seep into the industrial climate, which offers warped noise and textures, as well as the chilled melodic enterprise adding its weight to the song’s persuasion. It is an endeavour spiced with a touch of Sisters Of Mercy and Bauhaus, and as the track continues with open clarity around its warmer elements, shadows impose upon and the raw vocals prey on the senses. It is fair to say that each song individually brings a new step up in the presence and persuasion of Legio Axis Ka, this one with its increasing rabid turbulence another strong step in its ascent, a compelling move almost matched by the mercilessly tempestuous storm of A l’univers. Electro pulses resonate through bone and psyche from the off, enticing feet and emotions to lend their eager energies to its call whilst the melodic and sonic invention of the band provides a ravenous celestial and dirty terrestrial landscape for ears and emotions. Not as instant as its predecessor, the song subsequently wins over appetite and thoughts whilst revealing more of the inventive ideation and songwriting craft of Pavillon Rouge.

Both Aurore et Nemesis and Droge Macht Frei enthral and enslave, the first laying down its first potent tempting through a delicious dark bassline before brewing up a sonic and emotional tsunami of ferocious ire and intensity. Its successor provides the first truly insatiable full-on invitation to unleash the dance floor moves, its rhythmic stomp a pulsating infection which leads and drives the song even when enveloped in rabid smog of noise and sonic rapacity. As ever there is much more to the songs and both engross with melodic ingenuity and the often understated but open imagination which brings striking contrasts and unpredictability to all offerings on the album.

From a raucous stomp Pavillon Rouge offer a celestial flight with Kosmos Ethikos, synths and samples aligning for an atmospheric exploration with a big brother like edge to its air before Notre paradis takes its own similarly seeded soar through a new spatial climate. There is a much darker feel and texture to the track compared to the last though, an ominous breath which coats guitars and vocals, not forgetting intimidating rhythms, as keys warmly and eloquently swarm around the senses. The pair offers their own sparking new adventures for the imagination to interpret before the closing Klux santur provides a transfixing finale to the album. With the most distinct eighties feel to its body and melodic enterprise yet, the track is a swirling maelstrom of light and emotional malevolence. It is a cyclonic treat to close things up, a seducing and senses ravishing end to an album which increasingly enthrals given time and attention.

The Grenoble based Pavillon Rouge have not offered an easily accessible proposal with Legio Axis Ka but who wants easy when far greater rewards come with uncompromising intensity and evolving creative assaults. The band finds the perfect blend of industrial and black metal fury for a proposition which fans of either genre should seriously contemplate.