As sonically savage as it is melodically radiant, Egressor provides one sizeable tempest of aggression, passion, and technical invention which thrusts Canadian progressive metallers The Body Politic into a whole new spotlight. The EP is a furious yet seductive storm which is as accomplished and gripping in its senses ravaging enterprise as it is in its rich croon of melodic and harmonic endeavour. The six track encounter provides a blistering fascination and unpredictable adventure which took a short while to reveal all its glories but emerged as another of the rigorously compelling events of the year.

Coming out of Vancouver Island and taking their name from the Clive Barker short story, The Body Politic made an attention grabbing mark with their well-received debut album All Too Human in 2011. Their sound entangles the nuances and freedom of jazz, which most members of the band studied at Vancouver Island University, with the colourful exploration of progressive metal and the predatory voracity of metalcore. It is a striking blend, skilfully twisted into an imagination binding storm as evidenced by Egressor. Following a period which has seen the band undertake several Canadian tours and share stages with the likes of Tesseract, Protest The Hero, and Scale The Summit, the new EP suggests it holds the spark to wider recognition as it sets the band out from the crowd.

The release impresses in many aspects, the technical craft, explosive adventure to the songwriting, and the striking vocals of Sam Britton the most striking of these. Produced by Spencer Bowman, the release opens with Vitam Agere. It 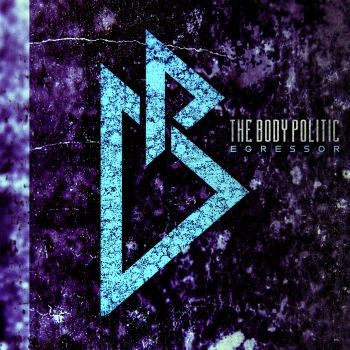 is a haunting instrumental piece, emotion spilling keys stroking ears as a sonic wind grazes the senses. The restrained entrance soon brews up a forcible and portentous coaxing as guitars and rhythms sculpt a climactic air which is still soaked in that initial haunted, almost apocalyptic texture. The track flows straight into Armature, the track an immediate onslaught of eventful and demanding rhythms aligned to scorching grooves and ragged riffs. Driven by the coarse scowls of bassist Jesse Janzen, his tones as aggressive as the metalcore spine of the track, the song swiftly reveals potent scenery of raw persuasion from the riffs of Matt Aasen and Dan Montgomery alongside the thumping beats of Spencer Bowman. This onslaught is tempered by the technical flair and imagination the guitarists also unleash and the exceptional clean vocals of Britton, his entrance the final piece in the jigsaw bringing the track alive. As soon realised every moment is just an instance in the journey of a song, the starter proceeding to steer ears and emotions through avenues of raucous passion and ingenious technical enterprise, all soaked in the emotive keys of Rob Wilkinson.

It is an imposing and impressing start but merely a taster of greater things to come, instantly shown by the following All Hands. Electro radiance sets the track off before a torrent of contagious jagged riffs and the brawling tones of Janzen erupt, their confrontation swiftly tempered and complimented by the smooth flow of Britton’s delivery. The song then twists into an enthralling schizophrenic dance of psychotic rhythms and similarly bred sonic imagination, both aspects flirting with and chewing on thoughts and senses respectively. It is a glorious turn in the song before it slips back into its melodic fire bound in hostile intent. The track is sensational, a constant flood of creative intrigue and bold invention unafraid to wrong-foot and confront the listener.

Swing For The Fences has the task of following the EP’s first highlight and does so with antagonistic gusto. Grooves and riffs climb over the psyche from the off before relaxing into a melodic embrace led by Britton’s refreshing tones. Keys and melodies wrap emotive arms around ears before the track combines its dark and light side for another absorbing flight of riveting imagination and honest passion. Both sides of the vocals impress but it is the guitars which push passions from ardour into a lust for the song, their almost cryptic invention as bewildering as it is bewitching and never allow senses and thoughts to settle and get a firm hold of the swirl of sonic acidity and bedlamic enterprise at the heart of the track.

In song and EP though, every part of the band combines to create spellbinding torrents of adventure and intent, keys and bass as vocal in their own way as the rhythmic and sonic character of tracks. Colqhoun instantly proves the point, the throaty lure of Janzen’s bass and the seducing presence of Wilkinson’s keys potent and expressive textures in the song’s exploration. Though not as dramatically gripping as its two predecessors, it casts a seriously rewarding and imagination provoking canvas coloured by raw metal and jazz rock hues, before making way for the closing Irradiate. The final track takes its initial crystalline melodies into a turbulent yet infectiously captivating furnace of adversarial angst and provocation, shadows and light hurling themselves around each other through the stunning skill and imagination of the band.

The track is a thrilling end to an outstanding release, one with the flesh and soul to push The Body Politic to the forefront of progressive metal.

The Egressor EP is available now digitally as a name your price download and on CD @ http://thebodypolitic.bandcamp.com/