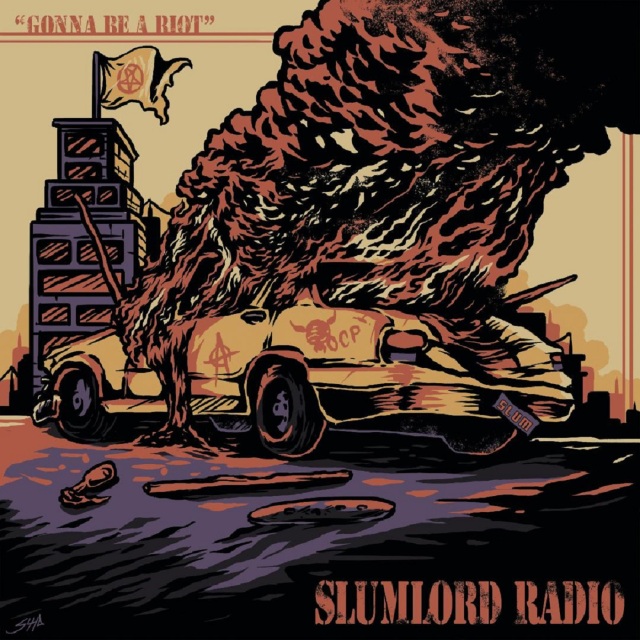 Ever since we found the dial to Slumlord Radio through their Tokyo Roadhouse Sonic Sex Castle EP back in 2013, the Grand Rapids hailing trio has had us relishing and devouring each slice of their dirt encrusted, attitude fuelled punk bred sound. Each subsequent release has only seen the band’s sound grow more striking and irrepressible and our enjoyment more intense and with the release of their new single, Gonna Be A Riot, the trend continues.

The release consists of two tracks, the voraciously rousing Gonna Be A Riot and a just as irritably animated cover of The Stooges’ I Wanna Be Your Dog. It has been four years since Slumlord Radio hit the spot and drew rich acclaim with the uncompromising, bruising, and incessantly dynamic Too Pretty For Tijuana EP, time which has seen their sound find even more belligerence, instinctive aggression, and rebel rousing enterprise as proven by Gonna Be A Riot.

Though bred on the raw seeds of punk rock, Slumlord Radio’s rock ‘n’ roll embraces essences of stoner rock, sludge, metal, and garage punk in its roar. Gonna Be A Riot epitomises the recipe behind their songs whilst casting a whole fresh incitement in its craft and devilry. The track springs an initial blast of noise before strolling through ears with a mischievous catchiness. The beats of drummer “Rattlesnake” Matt Claucherty echo that devilment in their senses rapping swing, the bass of Michael “The Westside Wolfman” Todd a matching encouragement as the dirty tones of vocalist/guitarist Tommy “Capt. Hollywood” Erickson share their grouchy goading.

With every twist adding bold unpredictability to the equally fluid stomp of the song it is the crazed enticement of the gang vocals seeing Myron (Dirty Americans/Workhorse/The Workhorse Movement), Christian Cooney (MOTO), Joseph Henry (The Holy Warheads) and Alicia Adams among the holler, which add the final infectious layer to the quickly proving irresistible encounter.

As much as the band stay true to the heart of the original, Slumlord Radio adds their particular predacious touch and prowling threat to I Wanna Be Your Dog, the song’s intent as toxic as it is submissive. It is a superb version of the classic and as its companion sees Cooney provide a guitar solo, the track also welcoming a similar contribution from Jeff Piper (Dirty Americans/Workhorse/Workhorse Movement) and a great piano teasing from Jeremiah Pilbeam who also produced the single.

Though we as a great many wish for more regular encounters with Slumlord Radio when they come around they are moments which so far have had us gripped in rock ‘n’ roll rebellion; Gonna Be A Riot one more great trigger.

Gonna Be A Riot is available now via White Elephant Records on vinyl and as a name your price download @ https://slumlordradio.bandcamp.com/

A handful of weeks back saw the release of Meet Me At The Blue Bridge, the new album from Grand Rapids, MI based band, The Setbacks. It was a release born from a devastating moment in the bands creator’s world; a raw and honest encounter which bares its heart in emotion and rock ‘n’ roll.

The Setbacks was started by vocalist/guitarist Lucy Ernst who soon recruited Slumlord Radio vocalist/guitarist Tommy Erickson on bass and Brent Riva of The Holy Warheads on drums to complete her project. Their first offering is dedicated to Gym Young, Ernst’s long-time boyfriend, soul mate and musician partner who passed away and deals with loss and the recovery from it. Across its eights tracks, Meet Me At The Blue Bridge also uncages some feisty bordering on the gnarly rock ‘n’ roll; a potent force within songs which with their open emotions and contemplation suggests it all provided a truly cathartic release for its creators.

The album opens with Downfall and immediately flexes its muscle and groove as guitar and bass swing with the lively beats of Riva. Nagging hooks are just as freely offered around the vocal lure of Ernst, the song revelling in its dirty rock with a tint of punk character while all the time teasing and tempting as ears and attention were swiftly grabbed.

The following Slaughterhouse Orchid equally releases an appetite niggling hook from the off, Ernst’s guitar curving itself around the senses with devious intent as rhythms add their own infectious gait to the quickly enticing encounter. There is a great wonkiness to the song, an off-kilter edge recalling the days of old school UK punk which just as eagerly infests the vocals before it all makes way for the album’s title track. Sauntering with a certain swagger the song serenades with a roar in a reflecting voice as melodic flames rise around its blues lined hard rock wrapped thoughts. Though it does not quite match up to its predecessors, the song is a magnetic listen but soon eclipsed by the addictive antics of Closer to the Middle. Once more an infernal groove bred hook got under the skin with swift and keen relish as vocals and rhythms create their own eagerly catchy lures; together creating an impossible to ignore mixture which is just as crafty within the otherwise individual fiery rock ‘n’ roll of next up Watch it Burn.

Reflecting on those hooks and grooves springing from the guitar across the album there is something akin to Devo going post punk/noise rock with Starsha Lee in close attention about them and in full captivation within next up Broken Teeth. With an unscrupulous swing and flirty swagger to its gait, the track is a feral temptress which as the album just gets more inescapable by the listen.

A Pretenders like hue wraps Inside Out straight after, it a song which did not quite grab ears as those before but is a strongly intriguing proposal adding to the strength of the release before another highlight closes things up. One Kiss is the one song created by Ernst and Gym Young, an acoustic affair soaked in off-centre beauty as melodies share dissonant charm. The track is as compelling and cracked as an image in a shattered mirror and just as rich an incitement to the imagination with keys only adding to its haunting romance.

It is a glorious end to a release which just blossoms play by play. It might not fall as easily on the ears of some but for those with a hunger for disturbed melodies, aberrant but viral rock ‘n’ roll, and heart bred openness Meet Me at the Blue Bridge should be explored.

Meet Me at the Blue Bridge is out now; available @ https://thesetbacksgr.bandcamp.com/album/meet-me-at-the-blue-bridge