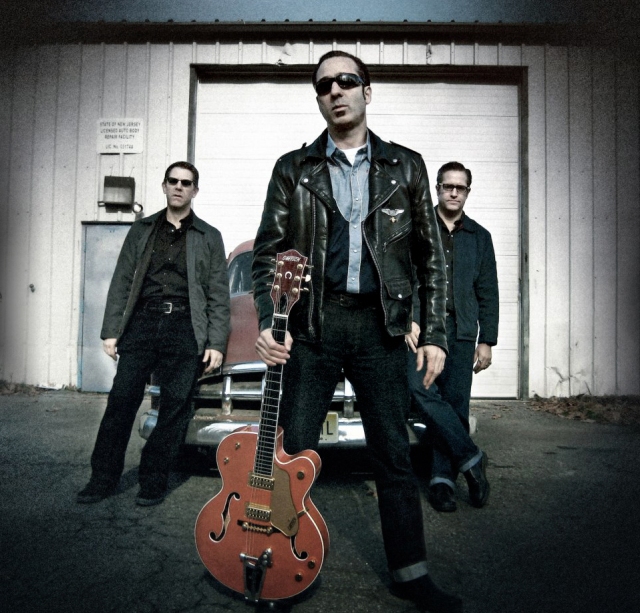 Sometimes you listen to a band for the first time and there is a glint in the eye of their sound, maybe a swagger of confidence to its persuasion which leaves a lingering presence which coaxes and insists you return to their melodic arms time and time again. So it was with US rockabilly band Bottle Cap Rockets. Listening to just one song ignited a spark of hunger and suspicion that this is a band heading for satisfyingly potent horizons. Obviously music is never a friendly beast for bands and often fails to deliver deserved rewards but with their impressive rockabilly sound veined by a rich and varied spicery of flavours and invention, you can only feel Bottle Cap Rockets are set for a heady ascent.

The band was formed in 2010 by vocalist/guitarist Al Gross, the band’s songwriter. Recruiting bassist/backing vocalist Chris Wolfer to complete the core of the band, with several different drummers recruited to make a trio for gigs, Gross was soon working on songs for the debut  release, First Seven which came out in August of last year. Based in Ringwood, New Jersey, Bottle Cap Rockets did not take long to grab attention and a strong local reputation for their blend of Americana fifties style rock and rockabilly with at times a passionate country lilt, which is no surprise when you fall into the embrace of their songs. Since forming the band has earned many highlights including

opening for Eric Lindell at Mexicali Live in Teaneck NJ, playing the legendary Maxwell’s of Hoboken, and being part of the Roxy & Dukes Rockabilly Rally in Dunellen NJ, where they shared a stage with the likes of Nikki Hill, The Ultra Kings, and Crash Gordon with Debra Dynamite on vocals. Now working towards new release Go Ape with a planned early 2014 release, Bottle Cap Rockets’ stock is in an open ascendency which when looking at some of their songs it is not really a surprise.

As mentioned they have a great diversity to their invention and music which by just looking at a quartet of songs you sense the depth of the songwriting and vision. If you immerse yourself in the sultry warmth of We Never Said Goodbye, the band soon treats the ear to a melodic haze of tender yet energetic mastery. The song has a smouldering glaze to its caresses which wrap an eager tempo and the excellent vocals of Gross ably complemented by the equally absorbing tones of Wolfer. Like a mix of Roy Orbison and Link Wray with a whisper of Nick Lowe, and all veined by compelling guitar flames around the infectious call of the song’s core, the serenade is an instantaneously temptation which leaves resistance a void option.

Black Eldorado offers a feisty dirtier proposition but no less magnetic and contagious. With a harder rock edge to its compelling musical and lyrical narrative, the song finds a more of a Dave Edmunds stroll to its delicious hot persistence. Again the song has an even tempo which makes no demands but secures full submission but equally there is an incendiary strength and muscle to the track which leaves no thought and passion unlit.

It has to be said that for all the great tracks we have heard from the band, Can’t Stop The Bleeding is the show stopper, and just recently brought the audience to their bloodlusting feet when being featured on The Bone Orchard podcast at www.audioburger.com. Unleashing a snarl and rapacious stalking which verges more on psychobilly than rockabilly, the song prowls and taunts the imagination with an irresistible growl of predacious riffs and rhythmic enslavement, whilst its chorus is pure virulence. Like the Stray Cats meeting Black Frame Spectacle and Guana Batz on a blood splattered shadowed street corner, the slice of intimidating devilry is one of the best rock ‘n’ roll tracks of past years..

Looking at one more song to show the strength of the band’s invention, I Don’t Love You is a hungry slap of rockabilly cast with another addiction causing chorus which punches things up a gear to launch a full rabid charge of energy and an attack of exciting confrontation. The version of the song we heard was a live cut of a track set to appear on Go Ape which only lights a real hunger to see the band in performance, which on the evidence of this lone song looks like being a memorable and sweaty treat, and for the upcoming release.

The future release of Go Ape has a big appetite and anticipation to satisfy from fans and growing media awareness, but you get the feeling Bottle Cap Rockets will take on and defeat the challenge with ease if their earlier tracks are accurate teasers.