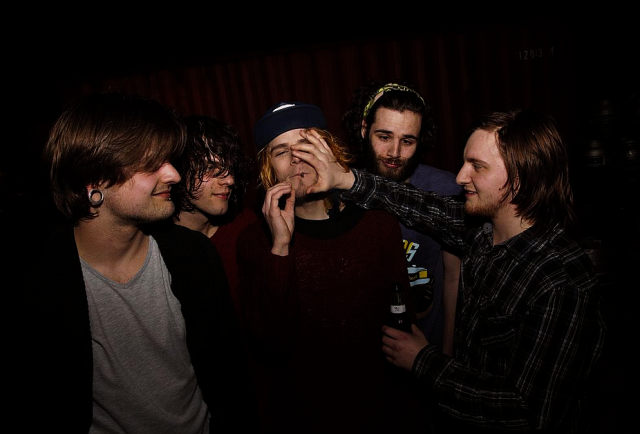 UK alternative rock band Allusondrugs continue their very impressive and striking emergence, already signposted by two previous riveting singles, with a third in the tasty shape of the tantalising and bewitching Nervous. Providing another side and hue to their adventure and sound, the new single is a fire which smoulders just as potently as it blazes with stirring sonic flames. It also confirms that this is a band on the verge of potentially major horizons given the right opportunities and hearts to enthral.

Formed in 2012 and hailing from Castleford in West Yorkshire, the quintet has taken little time in capturing the passions locally and further afield with previous singles Plasters and the following MyCat/Fruit, as well as their highly thought of energetic live presence. The underground and main media has not been slow in embracing Allusondrugs either, a hug which you know will only get tighter as Nervous works its way around defences. Released like its predecessors on Clue Records, the band’s third single adds another magnetic piece to the jigsaw that is Allusondrugs’ sound. Every release has been distinctly different but openly related and you sense still only offers an incomplete picture of the band’s instinctive invention and aural canvas.

Nervous opens with jabbing beats to which a sonic swarm of melodic enticing drapes its temptation, the guitars weaving an acidic 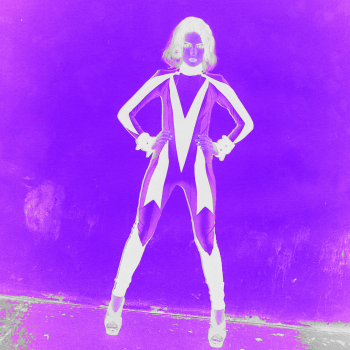 coaxing which soars across the emerging scenery of the song. With dark bass shadows adding to the premise, it is a gripping entrance which just as swiftly as it seduces is transformed into a minimalistic sultry landscape which the still potent rhythms and lingering tendrils of melodies enrich as glorious vocals and harmonies expressively colour the new climate. The track at this point is like a mix of The Walker Brothers and The Pixies offering a sixties croon aligned to a sirenesque surf and psyche rock fusion. It is irresistibly mesmeric which the subsequent grunge bred eruptions only accentuates as they roar with the creative endeavour the band showed they were so efficient at in the last single. Impossibly infectious and healthily addictive, the song is a transfixing treat easily matching the might of its predecessors.

The lead song is accompanied by the similarly impressive and thrilling Handicapped, a wicked lure of noise rock which worms its way under the skin and into the heart within its opening seconds. A deviously contagious groove nags and squirms venomously around the senses first before grouchy beats join its toxic brilliance. It is not long before the heavy throated bass and additional caustic scrub of guitar add to the virulent erosion which is washed by again strikingly melodic and refreshing vocals with courting harmonies. There is a sense of UK band Jingo and US rockers Solar Halos to the evolving narrative of the song, strong spices in something which is unique and incredibly compelling, especially with its vein of Eastern mystique which whispers provocatively from within the fiery encounter.

Completed with an acoustic demo version of Nervous, the single is another simply sensational incitement from Allusondrugs, a band where only bad decisions and poor luck will stop them becoming one of the leading enticements of British rock.

Nervous is available digitally and as a limited edition CD run of 300 via Clue Records now! 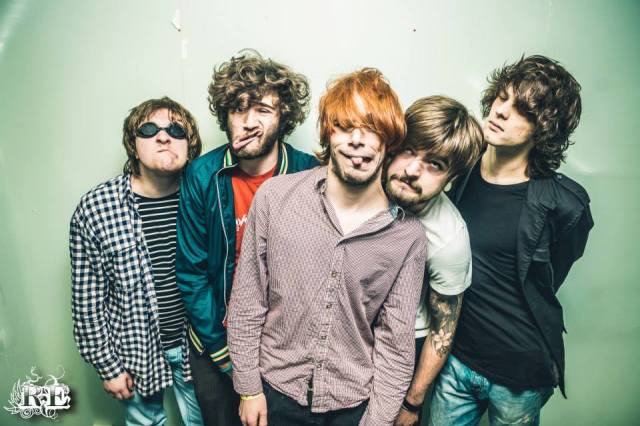 Providing a sultry tease which toys with and triggers the passions, UK alternative rock band Allusondrugs confirm and build upon the promise set by their debut release with the thrilling new double A-side single MyCat/Fruit. Two tracks of riveting fuzz lined vibrancy with a sinewy bass to hang it all upon the release is a further impressive step in the emergence of one refreshingly exciting band.

Hailing from Castleford in West Yorkshire, Allusondrugs formed in the autumn of 2012 and took little time in honing a sound which drew potent attention and acclaim through the quintet’s live performances locally.  Constantly spreading their presence especially through debut single Plasters, the band now stands poised to work upon the rest of the country with the new release and a tour across the north of the UK. Released as its predecessor via Clue Records, MyCat/Fruit is a magnetic feast of mischievous sound, one with a seductive embrace and a steely temptation.

MyCat opens with a scuzz coated hand on the shoulder of the senses, an almost industrial caress rubbing attention into action 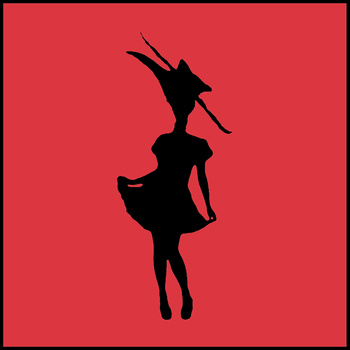 before thumping beats and electronic strikes punctuate its lure. It is a powerful invitation taken into irresistible climes when the track explodes with a stoneresque acidic groove and a heated intense vibrant energy. The harmonic vocals soon after instantly complete the virulent bait of the song as does the brief caustic explosions which equally grip the arisen appetite for the sounds offered; it is a riveting persuasion which has feet and emotions dancing and the imagination soaring. Across its impressive body the song sparks thoughts of Queen Of The Stone Age, The Pixies, and Hot Hot Heat, though there is something wholly distinct to Allusondrugs, a core which sets the song and them enjoyably apart.

The song also holds a shoegaze quality, if one with a want to devilishly bruise simultaneously and that essence makes a stronger tempting on Fruit. The song from a discord kissed single guitar beckoning stretches its arms with a grunge spiced stomp, riffs and rhythms a hungry recruiter of the passions. Settling into a compelling stride the track then taunts assumptions by smoothly slipping into a gentle melodic flight, a candescent passage bringing a mix of My Bloody Valentine and Felt into view before switching back and forth with the previous Foo Fighters like charge. It is a glorious slice of imagination, its persistently twisting and engaging adventure addiction sparking beauty and contagious feistiness united for a thoroughly scintillating encounter.

As the brilliant combination of MyCat and Fruit massages and riles up the passions it is hard not to anticipate Allusondrugs growing into and creating one of the more exciting and spellbinding presences within British rock over the upcoming horizons. We for one cannot wait…