Self-released on February 17th, expectations and suspicions are ripe with only one thought, that the This One’s For You EP will be the trigger to a countrywide awakening and passion for UK alternative rock/pop band Manhattan Coast. The evidence is bouncy and vibrant through the five irrepressible slices of revelry making up the release, and though the Bridgend quartet is not exactly carving out brand new adventures they are casting an enticement which is potent and rigorously enjoyable. The EP is an encounter which easily catches the imagination and breath with its big contagious choruses and almost spitefully effective hooks, a release showing Manhattan Coast as another in the long line of satisfaction fattening bands from South Wales.

Formed in 2011, Manhattan Coast has crafted a fine and impressive presence and reputation locally and across the UK, tours across Britain and the release of their first two EPs, Never Tell Me The Odds and Beg, Borrow and Steal, sparking eager interest amid a constantly growing fanbase. Equally shows with the likes of Kids In Glass Houses, Blitz Kids, and Straight Lines have brought further impressed focus upon the band. Now, supported by a European tour this month and UK dates with Forever After, This One’s For You is the next stirring declaration from Manhattan Coast and a tasty piece of excitable creative persuasion it is too.

War On The Weekend opens things up and immediately has ears under the spell of an infectious hook and punchy rhythms.

Into its potent stride with the excellent vocals of Nick Lane unveiling the lyrical narrative with smooth melodic tones, the track surrounds him with those continuing firm senses tagging rhythms and additionally teasing riffs whilst a web of inventive and resourceful guitar endeavour from Geraint Rees defeats expectations to inspire even greater adventure in the infection drenched song.

The band has been compared to bands such as The Wonder Years, Taking Back Sunday, and Man Overboard over past releases and sounds but the one band which stands out as the closest reference, certainly in regard to the contagion and inspired potency of the torrent of hooks across the EP, is Lost Prophets. Rees has mastered the ability to cause addiction with his inventive and often short but razor sharp hooks, their efficiency and potency as irresistible and admittedly at times enjoyably similar to those which littered the other Welsh band’ compositions. Second song Monsoon Season In Machine City like its predecessor offers that prime Lost Prophets like virulence with its first breath. From there the band unleashes a dense brawl of rock ‘n’ roll intensity and pop punk voracity as the song seizes the imagination and appetite as tightly as the first. The band’s songs have that mischievous quality of recruiting the listener’s passions, limbs, and voice in their adrenaline fuelled choruses, not a pretty sight in some of our cases, and this blaze of melodic rioting is no exception.

The opening pair provides the strongest bait into the release and band for newcomers, but are soon left in a sort of shade by the title track and the following Dreams Are For. The first of the two makes a reserved entrance, vocals and melodies stroking ears as the excellent bass tempting of Adam Jones adds just the right amount of intimidation to egg on the ever forceful yet respectful beats of drummer Dan Ryan. That Lost Prophets thought is probably at its strongest across these two songs but only adds to the admittedly familiar but refreshing stomp of passion and enterprise bursting from the songwriting and its presentation. The second of the two and best song on the release, is an epidemic of melodic toxicity and feverishly presented hooks within a pop punk riot of energy and ingenuity. Constantly unpredictable and swerving into new avenues throughout with Lane providing his most potent and impressive moment yet, though that applies to all members to be fair, the song is the most complete and original track on show and the most potent gateway into the artistic heart of the band.

Carpe Diem finishes things off in equally immense and winning style, rhythms finding their biggest sinews and guitars their strongest snarling attitude though as always melodies and harmonies aligned to deep infectiousness is the order of the moment. It completes a persistently thrilling and magnetic encounter from a band you sense is on the verge of breaking it big, certainly the This One’s For You EP suggests so. With no real flaws and maybe only a surface similarity in sound to some songs a seeming minor niggle for some i, Manhattan Coast  is set to make 2014 their year. 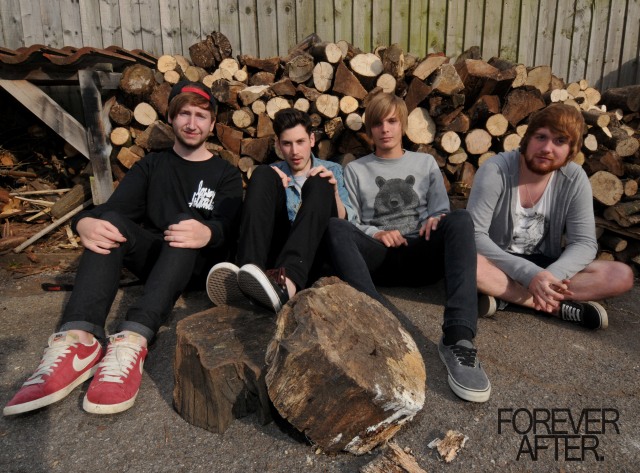 This year has seen many impressive and promising pop punk bands emerge but the majority offer the same conclusion, still to find a distinct personal voice to their sound. These bands share a similarity to each other and those before them to make the moment enjoyable but the future the canvas where hopes of standing out from the crowd, or not will play out. UK band Forever After is one of those rare exceptions, not only does the band ooze great promise ahead with the impressive EP Pictures but already has stepped into a unique place of their very own.

The bio for the Essex quartet states ‘for fans of Lower Than Atlantis, Deaf Havana, and The Maccabees. You cannot argue against that but easily can add the likes of Buzzcocks, Undertones, and Hagfish, such the feisty new wave and original punk essences which tantalise and molest the passions wonderfully throughout. Though not quite perfect Pictures is outstanding, an immediately exciting treat to fire up the heart which just gets better and better with every play.

Formed at the beginning of the year, Forever After soon had audiences baying for more with their live shows which included playing alongside bands including Mallory Knox and Ten Second Epic. Released earlier as a free download, Pictures too only excited a crowd looking for something different and with its official appearance November 5th, as the band prepare to record its follow up, a wider recognition seems inevitable once the four tracks thrust their wanton hook smart dance on more and more eager ears.

Touring The Map opens the release up with fiery riffs and thumping beats, as most pop punk songs do. It pulls

attention its way without startlingly offering anything new, leaving expectations exactly where they are when being confronted by another pop punk effort. Into its stride the track whips out teasing hooks, beckoning melodic weaves, and the excellent distinct voice of guitarist Dom Littler. Suddenly you realise you are in the midst of a sonic storm of originality and outrageous infectiousness, the beats of drummer Craig Mcqueen persistently probing the ear whilst bassist Harry Stokley prowls the song with throbbing intent whilst adding his own fine vocals to back up Littler. This alone would certainly ensure a fresh sound and experience but with the excellent guitar invention of Sam Byford, his melodic weaves bordering on lustful irreverence, the song is an irresistible piece of aural mischief, the thing sonic wet dreams are made of.  The song is brilliant, one which leaves one breathless whilst in full union with its passion physically and vocally, and the beginning of one of the bigger musical indie thrills this year.

The following (Old) School, is as it says on the tin, well in part as original punk flavours vein this great slab of rock n roll. Slightly grittier than its predecessor but equally as contagious, the song is a kind of mix between Bad Religion, Radio Stars, and Maximo Park but again belongs to no one but Forever After. A more abrasive affair the hooks easily captures the imagination whilst the vocal harmonies and melodic flames from the guitars just ignite further thrills and appetite for much more form the band. Like the first, the song is a shifting beast of pleasure, the rhythms erupting into excited bursts and bass offering a swagger which sets it apart from but perfectly in league with the charge of the guitars.

The third track called Interlude is just that. It is an ok instrumental but out of place on the release and just feels like a filler which is needless on a brief EP. Saying that though it leads perfectly into final track Say It True so maybe just reinventing it and making it a proper intro to another great song would be a rewarding thing to look at. The closing track is a riot of manic guitars, anthemic energy and shouts, and challenging rhythms all wrapped in irresistible invention and magical enterprise. The track just kicks up a storm of pleasure from which escape is impossible and full engagement willing.

Pictures is outstanding, simply as, and Forever After a band destined to make the future one thrilling and explosive punk rock adventure.