Released a year ago, Flesh Hammer from Danish noise alchemists Fossils has, from fusing the senses and passions on its first touch, continued to reign on our weekly playlist, and more often than not in a daily burst or two. The outstanding release from the instrumental noise rockers as their sound generally, is a primal temptation sculpted by the bass and drums of Simon Tornby and Per Silkjær respectively. In that union though, the band breeds hooks, grooves, and rhythms which are as sinister and predatory as they are contagiously all-consuming. The album was pure addiction in our ears and the band exactly one year later have done it all over again with a new release, this one coming with a thrilling twist.

With their new instrumental exploration scheduled for 2016, Fossils have filled the gap between albums and impressively fed anticipation with new EP The Meating. Where that twist comes in is in the fact that this encounter is awash with tempestuous vocals. At the time of the unleashing of Flesh Hammer, the duo enlisted various singers to interpret tracks vocally from the album at its release show. Originally planned as a one off occurrence, the band subsequently took the performers into the studio to record their additions to the original songs, and now we have the quite scintillating and compelling devilry of The Meating; seven pieces from the last album re-interpreted and ignited again vocally. Renamed and presumably re-mixed or re-tweaked musically, unless the vocals transform tracks even more potently than we thought, the EP is another irresistible and storming onslaught from Fossils.

Opener Deadringer features Jacob Bredahl of The Kandidate and once of HateSphere, and under the torrential bombardment of Silkjær’s addictive beats it instantly has ears and attention submissive. It is of course prime Fossils bait, the snarling lure of the bass and its crunching riffs aligning to voraciously swinging rhythms for immediate manna to the ears. Bredakl is soon roaring with his distinctive tones, challenging and raging with attitude and animosity within the increasingly virulent sounds. Already a pungently confronting encounter, the song is given extra causticity and rancor by the singer, and as all the songs becomes a brand new proposition.

The following Taxon is graced by the blistering industrialised contribution of Ultimate Combat Noise, the track brewed into a corrosively attractive and psyche scorching antagonist whilst next

up Meat Lover takes on a punk crafted guise thanks to Mads Stobberup of Cola Freaks. He vocally brawls over the spicy infectiousness of the equally agitated sound; the track like his voice is not exactly looking for a fight but given a nudge will lash out with relish. It is not the last track to have an infusion of varying punk revelry and those tracks do emerge as favourites, though everything excites without reserve.

Marie Højlund of Marybell Katastrophy gives Ridge and the Rock a siren-esque seduction next, her ethereal and seductive tones wrapping like a temptress around the wiry lures of the bass and the ravenous energy of the drums. It is a bewitching infestation of senses and lust, an increasingly rabid and psychotic enchantment matched by the punk ferocity of Speedbacon. Seb Doubinsky provides the voice to the Dead Kennedys like take on the original rasher of noise bestiality. The track is ravenous in nature, though nicely contrasted by the vocal porcine fun in a presence barely lasting a minute of length.

The final two tracks steal the show, even if by a slither. Firstly Ham Reader expels an acidic and venomous bluster over its tempest of noise through Mikko Mansikkala Jensen’s bracing throat bred squalls. It is a ferocious and wholly magnetic assault which sets the emotions up perfectly for the final devilment of Ködhabit. The track is blessed by Kim Kix, one half of psyche rock ‘n’ rollers Powersolo, who thanks to Fossils and this release have just swiftly been added to our lustful favourites list. The song as expected launches a torrent of delicious grouchy bass growls and insatiable rhythms but grows further with the deranged tones and delivery of Kix. The song we would suggest is the most startlingly evolved of the bunch from the original templates set by Flesh Hammer, a hellacious rocker which relentlessly flirts with the passions in a way which only an image of Gene Vincent being twisted inside out by and thrust on stage by Cleve Barker’s Cenobites, who then provide the backing sounds fits. We said that every track is a massive and equally thrill, and they are, but the final song of The Meating is another type of creature and looks down on all with majestic lunacy.

The Meating is and feels like a brand new offering from Fossils as we await their next instrumental escapade. Flesh Hammer graced many a best of list in 2014, and we can find no reason why this new offering will not be doing the same come December.

The Meating is available from March 2nd via Indisciplinarian.

Having been only a few reviews ago talking and enthusing about carnal provocations comprising of just bass and drums with the Atacama Death Experience album Wasted Time And Broken Bones under focus, we now have another impressive similarly sculpted offering to thrill and ignite the passions, possibly the most masterful yet. This time it is Danish duo Fossils with second album Flesh Hammer, a rigorously incendiary and compelling uncaging which again proves you do not need guitars and keys, and in their case also vocals, to send the imagination and passions on an intrusively invigorating and breath-taking inspiring ride. A caustically instrumental noise/rock ravaging of the senses, the ten track scourge of invention and craft, not forgetting violent seduction, is a magnetic tempest which through relatively brief scythes of noise driven ingenuity leaves no inch of the body, mind, and emotions Fossils free. The second release on new Danish independent record label, Indisciplinarian, Flesh Hammer is simply one of the early major pinnacles of the year.

Consisting of Simon Tornby and Per Silkjær, bass and drums respectively, Fossils’ brew of sound with seeds bred from punk and metal has drawn strong attention and acclaim already through their previous releases, debut album Meat Rush in 2012 and live album The Veal Thing last year. Performances with the likes of Zu, Liturgy, Death Crush, ICEAGE, Dope Body, Thulebasen, Queers and many more as well as tours across the US, Germany, Sweden and their homeland have equally impressed and reinforced the emergence of this unique band. Released digitally and on vinyl worldwide, Flesh Hammer is a new hefty stage for the band to persuade upon, something they do with sublime voraciousness and ease.

The first shard of lethal seduction comes through Carnivore Arrest, a title perfect for song and release. Thrusts of raucous 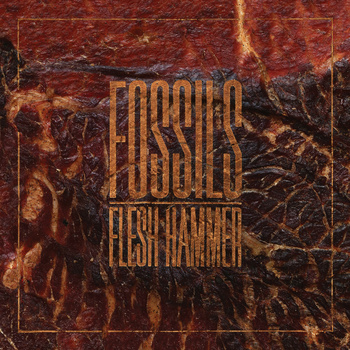 bass noise strikes the air first punctuated by drum punches before the track settles into an immediately potent stride of bass grooving which reminds of Gang of Four with hypnotic feet inciting beats. Explosive rubs of expressive predatory noise continue to interrupt the swagger of the song whilst little teases of finger sculpted dark lures and bolder abrasive intensity entice the senses in to compelling effect, before they combine to forge a ferocious brawl a of delicious noise driven causticity.

It is a tremendous start instantly matched by both Critical Mass and Pelvis Crust, the first a virulent epidemic of rhythmic seduction and vivaciously hungry riffing, grooves a twisted blaze of toxicity entwining around and through the primal core of the song. There is a deeper darkness to the track, an intimidation and predation which builds across its initial persuasion before climaxing in an antagonistic furnace of energy and craft. Its successor is equally as vindictive in its intent just going straight for the jugular from its first breath. There is an almost acrid edge to the grooves and sonic adventure too which breeds from the mastery of Tornby whilst rhythmically Silkjær’s scythes splinters bits of cartilage from the ears with every swipe. A more straightforward heavy rock tsunami than the previous more unpredictable and deliberately testing tracks, it is no less uncompromising or magnetic.

Lard Obstacle steps up next to leave another blaze of noise alchemy ringing around ears and emotions, its rapacious throat and appetite an unrelenting preying on the psyche until it secures submission and then rewards with a slender but entrapping maze of invention and solicitously grooved coaxing. The track lures you in and seduces like it wants your soul, which as it climbs to its ruinous finale it is given without regret. The following Cat Stalker is no less a dramatic protagonist and insatiable conjuror of malevolently creative rhythmic webs and animalistically toned riffery, its short abrasing of the senses full and irresistible.

The broader distortion glazed suasion of Filet Horizon brings a nastier severity to the storm though again the pair of antagonists are happy to weave in some undiluted addiction sparking assets in their rhythmic and sonic minimalistic glory. The groundwork set by the song is taken to new exhaustive heights through firstly Stun, the track an iron cast wall of raw endeavour which like the Red Sea splits for a brief moment to embrace further singular but as potently enthralling and arguably psychotic strands of deliciously poisonous imagination.

The final trio of tracks bringing the album to a powerful end starting with the exceptional Spamtastic, a sinew sculpted waltz of intoxicating adventure and magnetism. It’s masterful trap is similarly matched by the thick intensity powered Flesh Pillar, its oppressive swamp of sound and energy insatiable in hunger and presence, whilst final song Crack Horse simply welcomes all the wounds and submissive compliance offered the album to date and chews them up all over again with a torrential cyclone of rhythms and scathing bass magnificence. It is a stunning conclusion to a quite brilliant album. Flesh Hammer is simply exceptional and though it is easy to imagine there might be a surface similarity to essences of tracks which the lazy and impatient might pull at, beneath there is undoubtedly an irresistible world of ingenuity to devour. Fossils have created a slice of noise alchemy, a destined poll header come December.