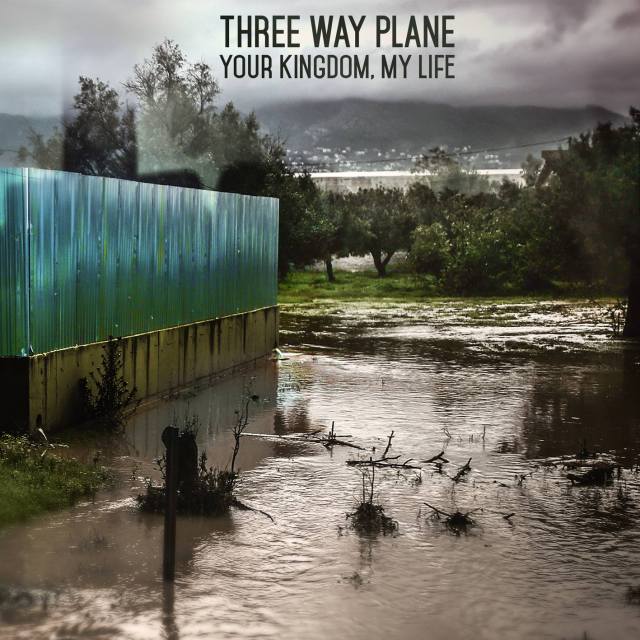 Way back in 2013, Greek outfit Three Way Plane got in touch and introduced us to themselves and their new EP Fire. It was a potential loaded indie/post punk infused proposition which was bitingly eclectic and imaginatively rampant suggesting that the 2004 formed band was ready to tap into attention far beyond their local success. They have not quite found that breakthrough since in a period which was assumedly busy for them but appearing quiet on the outside. Things might just be about to change though as the Athens outfit release their second album Your Kingdom, My Life and another collusion of sonic diversity and creative adventure.

Two years after forming the band released their first EP, Bright Days the first clue to the growing invention in their punk nurtured sound though it was their well-received debut album, give us something new to shout, which really stoked attention and eager support four years later; its success subsequently eclipsed by Fire. 2015 saw the band release a collection of remixes from songs out of their previous two offerings and the striking 7″inch single A Waltz For Unity & Love / New Destination. In hindsight, the latter was a definite tease of the new growth in sound and songwriting of vocalist/guitarist Stratos, bassist Giannis, and drummer Geo, who has left the band since the album’s recording; hints now impressively realised in Your Kingdom, My Life.

In some ways, the Three Way Plane sound has actually slimmed down its rich array of textures and flavours into something less overwhelming but more concentrated on its qualities, a sign of maturity easy to embrace. As opener Inner Warfare shows though it is still a web of styles and imagination which leaves predictability looking elsewhere for a home. The track initially waves a sonic lure in front of the listener, the guitar almost taunting before a couple more breaths sees rhythms strolling through ears with a knowing swagger as riffs sculpt their dance.  That first slither of post punk bait returns to tempt as the song slows a touch to welcome the expression shaped vocals of Stratos. Simultaneously Giannis’ bass grumbles with a throaty growl, riffs again casting an eager scrubbing of the senses as Geo’s beats tenaciously swing at a body and imagination swiftly hooked by the song’s mix of indie rock and punk at times reminding of UK band Houdini.

It is a superb start soon matched by the more crazed and caustic exploits of No, I’m Not Sober. Again the bass is an irresistible lure, showing more mischief than attitude this time, a matching hue directing riffs and vocals as the track swings between revelry and hostility. There is a definite feel of The Cure and their Three Imaginary Boys entrance upon the world, an additional off-kilter and magnetic discordance in tone and touch which lights ears and personal instincts. With the guest manipulation of Kostis Maloutas on the Theremin extra pleasure, the track eventually makes way for the matching excellence of A Waltz For Unity & Love. Straight away guitars entice ears, courting attention with their weave of wiry hooks and flirtatious melodies. Darker hues come into play soon after as the track hits its vigorous stride as vocals share lyrical suggestion though it is the snare of flirtatious hooks and energy which rubber stamps an already done deal between song and pleasure.

Guitars and bass again make the first flirtation with ears as Get Off Your Hands steps forward, its more shadowy nature and physical trespasses infested with fiery melodies and infectious rhythms which respectively wind through and steer the enjoyable ship. There is that post punk essence again at play but more vocal within the following Xepiasakos Theme, an instrumental cruising in on a great Gang Of Four like dexterity in its rhythmic prowess which immediately has body and spirit dancing. The piece is a touch more reserved than its predecessors but a livelier persistence impossible to refuse or let physical reactions leave alone. Musically the song also reminds of eighties bands like Leitmotiv and French outfit Modèle Martial, an array of essences cast into a sonic Three Way Plane kaleidoscope which certainly has a great spicing of nostalgia.

With a similar eighties spicing to its seduction of catchiness and challenges, Checkmate is simply infection from start to finish; guitar hooks and brooding bass lures a devious incitement infesting limb and imagination with viral expertise while the following Silent embraces the senses in a more atmospheric wash of sound though it too does not skimp on addictive snares and seriously catchy twists. That raw ethereal climate solely takes over midway though, a sonic drifting across the imagination with an underlying tempestuousness which grows as shadows blossom. Once more The Cure come to minds at certain moments, the song more reflective of their second and third album period while again creating a proposal individual to the Greek outfit.

The more caustic and volatile essences of other songs has its head for Your Life ’08, the track an abrasive slice of hardcore shaped punk but with a rhythmic agitation and tenacity which ensures an infectious bullying of ears and lively thoughts is welcomed.

The album closes with Psychic Changes, a rich trespass of vocal dissent and sonic intrigue spun with a tide of gripping hooks and predacious rhythms into a melodic labyrinth growing darker and more ravenous with every layer spun. As the previous track, it is more of a challenge than earlier propositions, more of a slow burner but ultimately emerges as one of the most striking quests from the imagination and craft of Three Way Plane.

There are times when the body really feels like a puppet to Your Kingdom, My Life, unable to escape its infection carrying incitements, and never a moment when pleasure is not the fuel of the day. Whether the album will see Three Way Plane break into international attention time will tell, it has all the attributes, but it will certainly establish the band as one of most exciting adventures waiting their moment.

Your Kingdom, My Life is out now and available @ https://threewayplane.bandcamp.com/album/your-kingdom-my-life 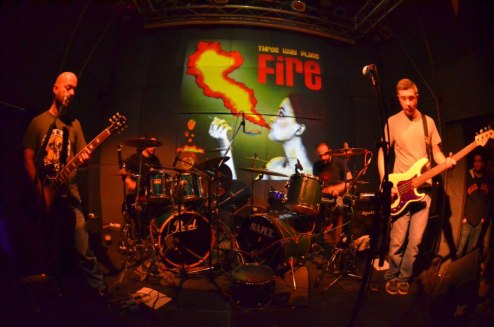 Hailing from the cities of Athens and Thessaloniki in Greece, Three Way Plane is a band which leaves the listener slightly mystified and arguably a little confused such their diversely composed sound, but all afire with passion for the deliciously eclectic and rampant sounds the band creates. The Fire is the new EP form the band, a quartet of songs which excites and incites the heart into a full musical rebellion and wantonness.

Three Way Plane formed in the last weeks of 2003 and from their first show in the following February have shared stages with the likes of Savage Republic, Senser, and Gallon Drunk to name a few. In 2006 the band self-released their debut EP Bright Days to good responses with the song My Best Friend being featured on the second Spinalonga Records compilation, In The Junkyard Vol 2. The same label released the first album from the band in 2010, Give us something new to shout, intensifying the attention surrounding the band and their dramatic sounds. Consisting of vocalist/guitarist Stratos, bassist John, and Dio and Geo both on drums, the band have now unleashed a deviously addictive slab of an EP in Fire which is poised to thrust the band into a further elevation of awareness and acclaim.

Old School Chum opens with shards of brass flames from guest musicians Kostas (trombone) and Nikos (trumpet), theirs a 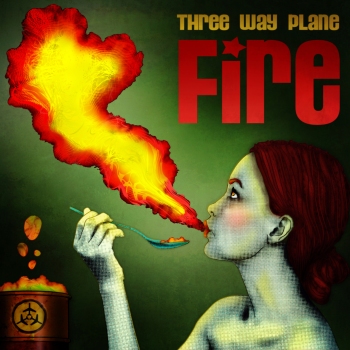 provocative blaze of entrapment which captures the imagination just as the thumping drum beats resonate through ear and bone. Within a breath of the time of the rhythms making their stance, fiery guitar riffs rampage and strong inviting vocals add their lures. From an initial funk/latin beckoning the track brews up into a storm of punk infused noise rock with numerous teases from varied sources to further whet the appetite. Richly infectious with the perfect depth of abrasion and melodic seduction as well as the continuing to tempt brass hooks the song makes the strongest persuasion with craft and devilment.

The following Freeze Me at first lays down a welcome of enticing guitar strokes which are instantly joined by exalting predatory bass growls which instinctively has one licking their lips in satisfaction. With a blend of Wire/Artery post punk to its mischievous swagger of attitude and noise bewitchment the track leads the listener by the ear into a maelstrom of energetic and vaguely rabid enterprise as well as an even deeper ardour.

The EP is in full flow now in sound with an intensive addictive grip on the senses and heart, if innovative and adventurous prepared to experiment noise raise the temperature Three Way Plane is aural manna which finds another tasty recipe to offer with Fall In Love. Featuring the voice of Stefania, who opens the song with her fine vocal caresses alongside a lone guitar, the track then shifts into a dusty atmosphere of bruising rhythms and stoner grooved riffs whilst the two vocalists duel words. From its gentle opening the storm of sound is the most aggressive and riled encounter on the EP though it, as is constantly he want of the imagination of the band, transfers its ideas into varied expanses of asides and inventive sounds throughout its thrilling course.

The closing Queen Misery completes the very impressive release with another forceful and inventive feast of flavoursome energetic imagination and passion igniting sounds. Like the other trio of songs, the track offers so many hooks and barbs which entrench deep and linger long after the song departs that it is almost impossible to remember whole songs but their intrusive and intoxicating elements take a deep and constantly pervading hold on thoughts and heart.

The Fire EP is one of those releases which does everything right at the right time and for the right reasons, the rewards all reaped by the listener. As a free download from: http://threewayplane.bandcamp.com/album/fire-ep this is a must have release. 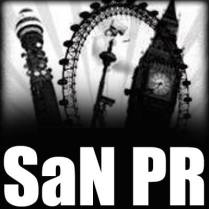