The first release since the outstanding Reclamation album of 2012, US punk metallers Mongrel unleash their new single Snakes and continue to set new standards for themselves and aspiring rock/metal bands. Taking from their upcoming Evolution EP which is slated for an early 2014 release, the new track employs all the renowned and expected inventive and addictive aspects of the band but gives them a new fire to burn explosively within further exploration from the band and their songwriting. As anthemic and contagious as you would expect from the Boston quartet, Snakes reinforces the hunger of their fans for their bruising, riotous sounds whilst laying down plenty of bait to recruit new greedy hearts.

Formed in 2003 by guitarist Adam Savage, Mongrel has over the years evolved into a highly sought after live band and a formidably potent studio encounter with a wealth of releases strikingly marking their steady and continual rise. Since forming the band has laid waste to stages alongside the like of GWAR, Korn, Otep, Sepultura, Prong, Halestorm, Wednesday13, Fu Manchu, Dizzy Reed, and the Misfits numerous times as well as touring with others such as FEAR, Blitzkid, Trashlight Vision, and Michale Graves, all the time continually drawing acclaim. Equally from the start their releases have lit up the passions of fans as well as the independent airwaves, the band a regular on the likes of shows at http://www.Audioburger.com and The Bone Orchard podcast, but it is fair to say that the full potency and heart of the band exploded when they enticed vocalist Jessica Sierra into the fold, her snarling vocal beauty igniting something lying dormant in the band with previous frontmen. Through The New Breed of Old School and Declamation EPs on to Reclamation, Mongrel has grown and evolved into an intensive and magnetic force which Snakes only elevates further.

The single wastes no time in tempting the ears as the guitar of Savage skilfully strokes the extremities with his inviting riffs, its call soon 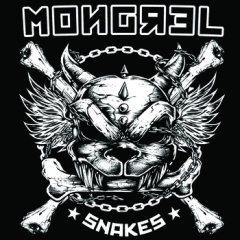 joined by a pulsating bass call from Michael Ariza and the crisp beats provided by drummer Mike Hogan. Settling into an open temptation, the power and thrust of the song is taken up another level as Sierra punches the lyrical intent forcibly and melodically into the imagination. All the while there is a reserved but persistent groove which wages seduction upon the senses throughout the song, it enticing greater passion and hunger from the listener and it is fair to say that at this point the single has submission already in its hands. This is not enough though it seems as the instigator then shifts seamlessly into an evocative and intimidating yet smouldering flame of sonic endeavour and emotive persuasion which has the band pushing their boundaries and ideas without losing their core energy and intensity. The moment is brief but potent and makes for a building step for the final adrenaline lit finale. There is a certain pop punk element to Snakes which arguably has not appeared before with Mongrel and it is a refreshing move brought with craft and adventure which avoids eroding any of the band’s confrontation and  inciting invention.

It is hard not to be excited and full of impatient anticipation for the Evolution EP thanks to Snakes, but the wait will be relatively short and the single ensuring the time is well fed with its incendiary exploits. A name your own price release at Mongrel’s Bandcamp profile, the single is the perfect invitation for those new to one of metal’s best ‘undiscovered secrets’.

For those aware of US band Mongrel, it is wide knowledge that they are one of the most exciting and accomplished underground rock n roll bands around, and have been since forming in 2003. For those still to discover their addict forming blend of punk rock and metal now is the time to feel their bite as they release new album Reclamation, a collection of songs which will have fans and newcomers reeling from its might and infectious brilliance.

Reclamation emerges from what basically has been four years of turmoil for the band through line-up, studio, and studio disruptions. From early on right through to now the Boston, Massachusetts quartet has established a permanent place in the hearts of growing multitudes from their releases and sharing of stages alongside the likes of Misfits (multiple times), Gwar, Korn, Otep, Sepultura, Mindless Self Indulgence, Prong, Fu Manchu, Psychostick, Wednesday13, Dizzy Reed (Gn’R), and Piggy D (Rob Zombie) to name just a few, alongside their own tours and shows. It was the departure of their long term vocalist and drummer in 2010 which dropped one of the biggest obstacles in the way of and to slow down the rampaging charge of Mongrel. Dave Kazukiewicz was soon enlisted to bang the skins but a vocalist was less easy a solution to find. Another male singer was brought in as they searched long and hard but that was a short lived answer. Still gigging as is the Mongrel way, they called on their friend Jessica Sierra from the band Affliction to cover some shows with eventually the temporary arrangement becoming, to our pleasure, permanent.

Now a powerful and stable unit of band founder Adam Savage, bassist Rev, Sierra and Kazukiewicz, the quartet set about 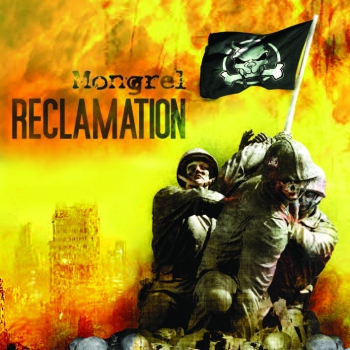 re-recording tracks from the releases which had thrilled in the early days, debut album Fear, Lies & Propaganda of 2006 and the Revenge EP three years later.. These tracks came out upon the excellent The New Breed of Old School EP. To those who had grown with the band it was a surprising but mighty evolution from what came before, the vocals of Sierra bringing a tighter grip and quality to the sound which only impressed. 2010 saw the band enter the studio once more to record a further step forward with the Declamation EP and most impressive of all this the Reclamation album. Of course a battle ensued to get it released as is the life of independent bands (as well as the more recent departure from the band of Rev to be replaced by Micah Maltais) but now the album is here released through THC Music imprint THC: X, and ready to snarl and take chunks out of all lucky enough to ensnare it.

The album slaps the ear around from the start with Bored To Death, a feisty slice of anthemic punk rock. It is easy to digest and irresistible, straight forward rock n roll brought with fiery riffs, thumping beats, and the intimidating tones of Sierra, her voice a beckoning tease and attitude snapping aural harpy. It is a powerful and energetic start soon ramped up by the following Pseudocide and Fuck Off And Die. The first just burns the senses from its first note and leaves one smouldering in glee by its end. Ramones meets The Distillers; the track is a punk explosion which scorches the senses to near orgasmic pleasure. The second song prowls and snarls with a ravenous intensity, its heart and Sierra ready to pounce and rip its victim apart whilst the metal driven riffs scythe their way through the ear with caustic power.  Another song leaving one breathless it adds to a high octane start.

One almost expects things to drop level wise at some point as with most releases but this is not like most albums and with the likes of the prowling Zombies Of War with Sierra giving Brode Dalle a run for her money in a delivery of melodic snarling, The More I Bleed with its corrosive guitar abrasions, and the Otep tinged Tarnished Halo, igniting deeper and fuller pleasures, there is no chance of any lost of levels.

Reclamation is a masterclass in punk rock/metal from first note to last but some tracks simply exhaust the passions such their towering quality. C and a Half is one such song, a sonic addition of rampaging riffs and riotous chorus assaults with the guys backing up Sierra perfectly, spite dripping from every note and syllable. The groove magnet Crucifiction alongside the delicious melody drenched Revisionist, easily rival in their diverse and imaginative ways to continue the immense satisfaction and clear variety on show within the combative cloak of sound. As with all songs they are openly contagious, rippling with hooks and grooves and outstanding vocal spreads from Sierra to fire up heart and passion.

The blistering tempest which is Stillborn Saviour, the ferocious Wake Up, and a reworking of an old song from their first album in No Gods No Masters, end what is easily one of the best albums this year, not only in punk rock or metal but across all genres. Reclamation is sheer excellence whilst Mongrel are at their strongest t ever and still one of the leading underground rock bands, though now with this album one expects their elevation to the big metal table to be imminent.