Almost two years ago, UK rockers Syren City laid a hefty punch on attention with the Escape EP, five tracks of multi-flavoured rock ‘n’ roll which was as compelling as it was thrilling. Now the Bristol quintet returns with its successor Paradise In The Dirt and three more encounters which leave ears ringing with pleasure and an appetite for more simply greedier.

Formed in 2011, Syren City swiftly bred a sound from essences drawn across the likes of post hardcore, punk, metal and alternative rock. The 2014 Escape EP quickly showed it was a formidable and striking mix, echoing the band’s live reputation earned through festival appearances and shows with the likes of Turbowolf, The Alarm, Mallory Knox, Max Raptor, The Hell, Roam, Black Foxxes, Futures, Young Legionnaire, Attack Attack, and Blitz Kids. The release of their new proposition shows that the band’s sound has continued to expand and indulge in greater adventurous traits, increasing in magnetism with equal measure. The first in a series of EPs which have a conceptual thread and link, Paradise In The Dirt captures ears and imagination with swift deftness of enterprise and a rousing boisterousness, never relenting upon or releasing the listener until its final note has shared its mighty bait. 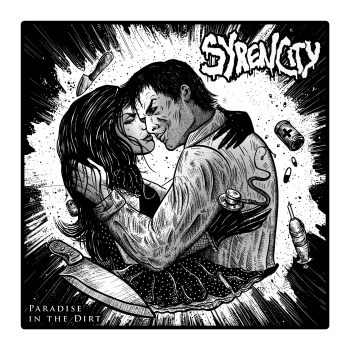 It opens up with It’s Morphine Time, a song which descends on the senses like a tempestuous challenge from its first breath, but a threat just as quickly seducing ears and appetite as riffs and rhythms launch their hungry persuasion. In no times wiry grooves are entangling song and listener while anthemic vocal roars across the band find a great Beastie Boys feel to them. As it proceeds, the scent of bands such as Rage Against The Machine and Refused also colour the encounter, with frontman Simon Roach taking vocal charge as the barbarous rhythms of bassist Sam Leworthy and drummer Mat Capper badger and incite. It is a virulent infectious affair with the enterprise and fiery grooves of guitarists Ian Chadderton and Josh Mortazavi arousing, aiding and shaping the songs twists and turns as its metal/heavy rock antagonism and inescapable catchiness fuels pleasure, the song alone surely ensuring the EP’s certain success.

It is quickly backed up by its companions though, Danielle coming next and opening on a melodic caress which inspires the following vocals and flirtatious gait of the song. Little time passes before again a volcanic quality and energy erupts, its theatre creating a My Chemical Romance like attraction before things slip back into the captivating calm and the repeat of the galvanic cycle. As within its predecessor, there is a kind of tempestuousness to ideas and intensity which only adds to the riveting drama provided before 10,000 Knives steps forward to grab its share of the plaudits. Initial riffs and lures have a slight Therapy? feel before the punk heart of band and song grips and adds a Reuben meets Taking Back Sunday hue to the outstanding encounter.

All three tracks are uniquely distinct to each other but fuelled by a sound with a character all Syren City’s. The band impressed with their last release and have only made a bigger impact with Paradise In The Dirt, a release sure to be the favourite EP of 2016 for a great many.

Seemingly labelled as post hardcore, UK rockers Syren City has a sound which almost defies tagging as it employs a wealth of rich flavours such as punk and metal through to alternative and hard rock, and that is still only scratching the surface. It makes for a rousing incitement as evidence by their new EP Escape, a release which is best described as one almighty roar. Consisting of five tracks which twist with the flair of a pole dancer and has more moves than a senses ravaging roller coaster, the band’s new proposition is quite simply a ferociously compelling and thrilling adventure.

Hailing from Bristol and formed in 2011, Syren City took little time to light up venues around Wales and England, supporting the likes of Turbowolf, The Alarm, Max Raptor, Futures, Young Legionnaire, Attack Attack, and Blitz Kids, whilst festival appearances has seen them share stages with bands such as Brand New, Don Broco, We Are the Ocean, Mallory Knox, Kids in Glass Houses, and Feed The Rhino. Their live performances and their impressive portion of a split EP with fellow Bristolians and metalcore band Koshiro, has led to keen anticipation for Escape, an appetite fully fed by the impressive collection of contagious anthems.

The band hits top gear straight away with opener Bleed. It is a rampage of a song, heavy hitting and rigorously coaxing rhythms from drummer Louis Catlett aligned to the throaty lure of Adam Armour’s bass, an irresistible entrance soon

enhanced by the scything riffs and chords provided by guitarists Ian Chadderton and Adam Hopton. Instantly there is a feel of Foo Fighters to the muscular persuasion which increases as vocalist Simon Roach reveals his strengths. With gripping backing vocals and shouts adding to the incendiary array of hooks lining the charge, there is also an essence of Max Raptor and the now defunct Always The Quiet Ones to the stomp though all mere spices to something openly distinctive to Syren City. The track continues to set a fire in ears and emotions, its unpredictable invention and side steps in its imaginative emprise as swiftly addictive as the face on tempest of aggression and melodic enterprise.

The stunning start is followed by Our Disease, another track taking mere seconds to seduce senses and passion with its vocal bellow. This bait leads into a punkish antagonism in voice and sound before it in turn evolves into a hard rock stride. As it predecessor, the song mixes up gait and attack with seamless and skilled resourcefulness, never relinquishing its grip on ears and imagination with its increasingly catchy and enterprising temptation. It does not quite match the opening triumph, due to the majesty of that song, but easily ensures that the EP continues to inflame body and emotions as does its successor Fire In Your Name. The third song unveils an enticing sonic groove straight away which rapidly makes way for the potent lead and backing vocal mix, before returning to bind a stroll of punchy beats and raw riffs. As with most songs, that earlier mentioned post hardcore essence is a rich colour to the canvas of the track, but as with all it comes soaked in variety and diversity, melodic hues and a metallic sonic veining adding to the pop punk seeded emotive howl of the song.

The treats keep coming as Long Way Down enters the affair next. The blend of raw and aggressive confrontation within Roach’s predominantly melodic coloured vocals alone make a rigorously enticing offering whilst grooves and hooks in the heavily swinging tempest of the song, only add to its addiction sparking tendencies. The track shows a more savage side to the band’s sound and songwriting whilst still embracing their melodic natures; providing yet another highlight before final song Asphodel brings it all to an infectious close. Revelling in a hard and melodic rock web of enterprise, the song bulges with rhythmic sinews and fiery sonic endeavour whilst vocally Roach impresses once more as does the contributions of the band in the same department. At times raging with nostrils flaring and in others an evocative croon, the track is a mighty end to a similarly impacting release.

Escape is a riveting encounter from a band easily living up to the buzz around them whilst even in its impressive presence and success, revealing the potential for much more in Syren City.