When a release instantly and impressively smacks you in the face and proceeds to tease, taunt, and fascinate thereon in you know there is something rather special in the brewing. Forged is one such proposition, the new album from UK based outfit Maziac devouring ears and attention from its first breath and only continuing to captivate with its eclectic body through every passing second.

Formed in 2017, the London residing trio of guitarist/vocalist Tony Best, bassist/synth player Tim Stokes, and drummer Marc Vachon have already faced potent fan and critical praise through their first EP, the Justin Hill (SikTh) mixed and mastered Parallel unveiled in the May of 2018. Its success alongside the band’s rousing sound and live presence has led the band to share stages with the likes of The Ever Living, Epsilon, Derange, On Hollow Ground, and Winchester; it all adding to their growing reputation. All previous acclaim though should be quickly paled by that destined to be garnered by Forged, one of the year’s brightest gems so far.

Again recorded with Hill, Forged erupts with an immediate predacious hunger, opener Symptomatic a tempest sweeping in and consuming the senses. Rhythms bludgeon as riffs dismantle the senses, Best’s vocals just as urgent and rapacious as a cyclone of djent/technical and alternative metal/rock disgorges its rabid temptation. It is a starting introduction which only continued to incite and thrill as the song reveals its craft and prowess. As quickly and continually proven, Maziac have a sound which enjoyably proves very difficult to pin down with references to others but certainly within its ferocious sonic kaleidoscope essences resembling bands such as Fear Factory, Deftones, The Contortionist, Between the Buried and Me, and Spineshank swirl. 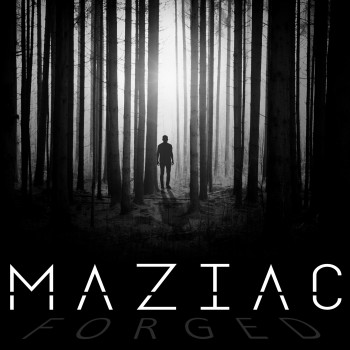 It is a stunning start keenly and powerfully matched by the following Escapism. Relatively restrained in comparison, the track still prowls with a definite predatory intent; its rich body wrapped in melodic wiring as alluring as they are cutting. Best’s vocals equally have a calmer harmonic edge in a delivery as varied as the sounds around it, the band’s alternative rock instincts a thick colour to the inventive metal of the song. It is hard not to think of the track as a beast, stalking and preying on willing ears tempted by sonic plumage of inventive temptation.

Cortisol teased an already eager appetite right away with the rhythmic rapping of Vachon, his beats taunting attention as the guitar brews up its subsequent eddy of bold enterprise and melodic flaming. The song’s progressive nature shapes its imagination; rock ‘n’ roll contagiousness fuelling the animated gait of unpredictability. There is a touch of Voyager to the track as too Muse but once again, it emerges solely Maziac before Prisoners saunters in with its swiftly beguiling lures. A whiff of The Kennedy Soundtrack shades its beginnings, a Muse-esque hue adding to the mix as the riveting track unfurls its intrepid enterprise and adventure to challenge for best track honours.

The melodic intimation of brief instrumental Vicissitudes had the imagination conjuring ready for the far more feral but composed dynamics of Again. Once more progressive and djent elements collude in its buoyant design, Stokes’ bass not for the first or last time a rousing snarl of incitement in the midst of skilled melodic and sonic endeavour. It is fair to say that as potent tracks are on first listen, each following play only reveals fresh depths and textures for greater rewards as no better proven than here.

Deceptive of its title, Allure instantly embroils ears in a pestilential cauldron of metal but soon relishes the band’s melodic dexterity and the almost poppy catchiness that breeds. It is a thunderous encounter teasing with glimpses of the peace at the eye of the storm, never giving in to predictability or anything less than compelling while closing track, Resolution, casts its own experiment in texture and tone to bring the album to a fine close. In certain moments almost primal in its climate and in others like a melodic sunspot, the song just enthralled as another aspect to the Maziac sound and imagination is shared.

With Forged ringing in our ears it is easy to be excited about what is ahead for and from Maziac because as suggested, they have created one of the year’s finest moments so far.