With a title like Welcome To The Slaughterhouse we were bound to be naturally drawn to the debut album from UK metallers Bang Bang Firecracker, being a sucker from blood promising drama, and it was an instinct quickly rewarded by a collection of tracks which grabbed ears and attention with ease.

Bang Bang Firecracker is the solo project of guitarist/vocalist Kieron “K” Berry, a musician who previously has added to the successes of bands like Razorwire, Pain Control, Extreme O.D, and Enemo-J. On leaving the latter Berry took time to recharge, though it proved a brief break once he answered an advert for a ‘Musician Wanted’, which led him to support one of his guitar heroes in Chris Holmes (W.A.S.P.). This inspired Berry to write and make music again, recruiting old friends in Marcus Wrench and Russ Gwynne to provide bass and drums respectively to a sound nurtured in the rich essences of metal, classic and modern rock. With Charlie Cooper now behind the swinging sticks, Welcome To The Slaughterhouse is the first encounter with Bang Bang Firecracker and provides all the reasons and ingredients to find an appetite for the prowess and potential of the band.

The album’s opening title track is like a contemplative dawn, the lone intimation of piano provided by guest Shaun Lowe an evocative coaxing leading to the fiery eruption of metal tenacity. Berry hollers as his guitar casts a web of rapacious riffs and sonic dexterity, all the while rhythms giving the blaze a darkly predacious and compelling imposition. With inspirations ranging from AC/DC and Ozzy Osbourne through to Slayer and Guns N’ Roses, there is openly something familiar to Berry’s sound across the album but it swiftly shows itself a fresh and individual incitement.

The great start is followed by The Non Believers, a song instantly prowling the senses with Wrench’s bass a great growling scowl within its barbarous air. It is a disposition just as potent in Berry’s vocals and makes for a great contrast to the melodic prowess of his guitar, a craft and agility which gets the following All Thriller No Filler off to a captivating start. Again the bass provides a great dark alter-ego to the melodic caresses and flames of the excellent track though it too has an instinctive coaxing rather than irritability to its presence; a mix which continues across the evolving and gripping lure of one of the album’s major highlights.

Devil Dolls is pure drama from its first breath, the initial swipes of Cooper’s beats addictive corruption matched by another delicious bass grumble. Soon bound in the sonic and acidic melodic strands of Berry’s guitar, the song echoes the success of its predecessor in its own individual manner before Immortalized swaggers in with its voracious classic meets groove meets thrash metal tinted holler. It is that fusion of flavours which gives the band’s such its familiar yet freshly adventurous lure and the song its rousing impact.

Through the rapacious bordering on grievous but keenly contagious stroll of Witch Proof and the even more carnivorous antics of Tasting Hatred, the album continued to hold its grip on ears. Both tracks for all their feral instincts equally cast a manipulative melodic enterprise and inescapable infectiousness, traits just as potent within next up Hellbent For Pleasure; a track with Gwynne providing drums, unapologetically embracing classic hues from the styles it weaves its confrontation from.

Ending on a gang baiting call, Welcome To The Slaughterhouse hit the spot with ease. Originality is maybe a breath more than a wind at times but that earlier mentioned freshness fuels every current and an appetite soon found for the Bang Bang Firecracker uproar.

Welcome To The Slaughterhouse is out February 22nd.

Listening to Enemo J is like being submerged in a swarm of African honeybees running amok, their sound a nagging and ferocious irritant that never desists in aggression and rage once provoked into creation by the band’s inspirations and imagination. As proven by new album Miley Virus, it also produces raw sonic nectar that ignites the appetite and through an unpredictable tempest, leaves the senses wrung out but with a real greed for more. The UK metaller’s fifth album is arguably their most adventurous and diverse yet, as again the band weaves an agitated expanse of styles and flavours into their storms, equally though it is possibly their most testing, but as that only results in being amongst their most fiercely enjoyable, it is a definite asset.

Hailing from Burton On Trent and emerging at the beginning of the new millennium, Enemo J has gone on to unleash a quartet of successful and increasingly acclaimed full-lengths and earned a potent stature for a live presence which has seen the band play with the likes of Napalm Death, (Hed) PE, Sylosis, Black Light Burns, and Korn, create a stir with performances at Download in 2010 and more recently 2014, and play with similar reactions fests such as Bloodstock. Now the core line-up of vocalist Craig Hartwell, guitarist Haydn Edwards, and bassist Mikey Wyke are ready to nudge and punch the broadest spotlights with Miley Virus, expectations after many listens to the beast leaning towards a highly positive outcome in that intent. 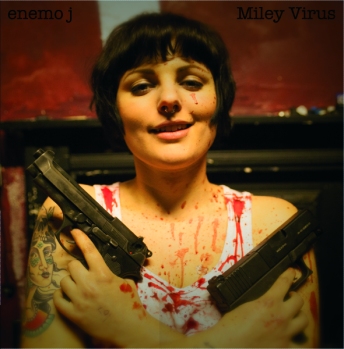 After the vocal led Intro, band and album explode into tempestuous life with This Is Not A Toy, immediately spinning web of steely grooves and predatory rhythms led by the distinctive and as always swiftly engaging roars of Hartwell. His attack though comes with great variety from his throat and within the band, an adventure matching the winding lures of guitar and more controlled but no less imposing prowl of bass. Aligning ferocious metalcore influences with a groove metal tantalising, and subsequently cleaner textures in sound and voice, the track is a gripping and dynamic incitement to set things off and highly addictive, especially the more it evolves its rapacious body.

The album’s title track steps forward next, Miley Virus from an electronic coaxing flexing rhythmic muscles and cantankerous grooves from the already impressing prowess of Edwards. Spilling rap metal tenacity and enterprise in vocals and thick initial temptation, the track creates a kaleidoscope of uncompromising intensity and melodic tempting which at different times hints at the like of Skindred, Stone Sour, and American Head Charge across a thoroughly magnetic persuasion. Unfortunately our promo did not come with any details of guests and full personnel on the album but amongst many things, female vocals add a great siren-esque lure to the track’s robust adventure.

Five Percent slips in next, Hartwell’s voice offering its hip hop prowess as the track begins its growth into a fiery protagonist stalking ears and inciting with lyrical and physical confrontation. As bestial as it is harmoniously alluring within a volatile and climactic ambience, the outstanding track is a gripping proposal matched by This Stops Today. Carnivorous riffs court a sonic imagination straight away, vocals leaning towards a rancorous toning as they provoke and excite with the track perpetually twisting and embracing a wealth of attacks and formidable flavouring. As its predecessor, it too marks another lofty peak within the album with its Slipknot meets Stuck Mojo like voracity, a pinnacle almost emulated by the death/metalcore lined savaging of Ides Of March. The song is a predator of ears and emotions, virtually everything about it an insidious prowl led by the great malevolence fuelling Wyke’s bass but then tempered by the acidic strands spewed by Edward’s guitar and again impressive vocals.

The boldest adventure within Miley Virus starts emerging from Majora, the song a roar of rap lined metalcore which suddenly turns, with more impressive female vocals at its centre, into a melodically honed gothic proposal. This is Enemo J, so things never stay in one direction for long though; a swarming tenacity of riffs blossomed from the savaging fury and in turn swinging back into the gothic coated seducing. To be honest the track caught our ears by surprise and took a while to totally convince but overtime it wins out, as too Throughout which takes a similarly longer route in succeeding with its convincing. A thick tapestry of flavours extreme and melodic which at times flirts with post hardcore tendencies too, the song casts more great female vocals alongside the caustic squalls of Hartwell as melodies from keys and guitar provide an evocative drama. Admittedly, it fails to spark the same richest of reactions as earlier tracks but in fascination and invention, the song is absorbing and easy to repeatedly explore.

Both the volcanically intensive Sufferance and the drama fuelled radiance of Time sear the senses and light the imagination respectively, the first with its blackened wind over a swirling sonic canvas of endeavour. Its successor spins a low-key but potent acidic hook repetition within a sonically and emotionally turbulent post hardcore landscape, vocals as expected as strong as the music in revealing the depth of diversity and invention within their grasp.

Miley Virus is concluded by Drunk Lions At The Wolf Party, a ravenous ferocity of sound and presence veined by melodic and harmonic ingenuity. The song truly comes alive once all the extreme contrasts within it collude to create an engrossing flight of ire and emotive elegance, in turn providing a fine and big close to a riveting and thoroughly enjoyable encounter. Enemo J just goes from strength to strength with each release, and though for personal tastes it is a little bit a proposition of two halves, each song thrills and enthrals in their own inventive way to make Miley Virus an easy recommendation to make.

Miley Virus is out from November 1st through Digital Media Records across most online stores.