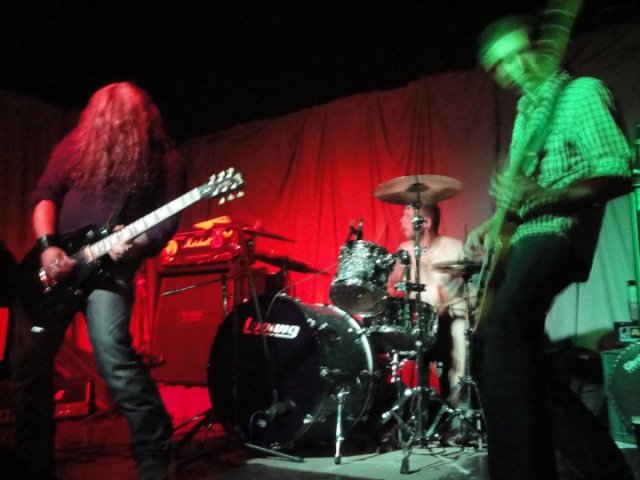 The end of last year saw many a fan and media source excited by the self titled debut from UK trio Grifter. The release slipped past us then but having finally been introduced to its enthused and energetic rock n roll we just had to share it here in case you too had escaped its initial emergence. Quite simply the release is unadulterated and straight forward rock music for the heart and aural bar room liquor to intoxicate the ear. The band do not offer up anything particularly new or groundbreaking but other than label stable mates at Ripple Music, Trucker Diablo, it is hard to bring to mind another band that does it with the same accomplished quality and passion with which this band does.

Grifter formed in 2003 as a quartet well for their debut gig anyway. The show saw the vocalist quit on stage and the band has remained a threesome of vocalist/guitarist Ollie, bassist Phil, and drummer Foz, ever since. From day one they have riled up and excited people with their honest heart borne rock sounds, big teasing riffs, and high octane rock n roll. As their music and reputation grew to draw in a wider and more eager fan base across the south west of the UK the band released their Elephantine demo in 2005. Favourable reviews rolled in and they found themselves the attention of Fury 76 Records with whom they recorded the High Unholy Mighty Rollin’ EP the following year, its actual release not coming until 2008 and again to very favourable reviews. The band were then approached to do a track for a compilation by Catacomb Records which led to their second EP The Simplicity of the Riff is Key in 2010 and again on the label. Last year saw them contribute to a split EP release with Stone Axe, Sun Gods In Exile and Mighty High on Ripple Music, a success that has seen them now release through Ripple again their first album.

Grifter the band and album encapsulate rock n roll, their sound and songs bringing the best from an obviously thick

blanket of influences and turning them into their own irrepressible heart fuelled music. As the album plays you are reminded of the likes of Black Sabbath, Thin Lizzy, Clutch, Stone Axe, Motorhead and ZZ Top as well as to a lesser but as important degree bands like Orange Goblin, and Kyuss. Classic rock, hard rock, stoner, blues and southern rock are all in the rich heady and thrilling concoction, a sound with no demands asked and no unrequited emotions taken, Grifter is full of rock music at its best given with heart, energy and fun, and made for people like themselves, rockers.

The tracks whistle by due to the way they pull one in straight away to party with the band, the likes of the southern tinged stirring opener Good Day For Bad News, Alabama Hot Pocket with its muscle flexing rhythms, and Young Blood, Old Veins with a stoner swagger and middle finger offering, leaving the pulse racing and breath looking for air to re-energise ready for more of the same insatiable, exhaustive and rampant sounds.

Every song on the album offers a bottle of double strength rock to become light headed from. It is full of sure and tight riffs leading one down to dirty deeds and rhythms that draw willing and impossible to resist contortions of limbs and energy. Some tracks do have more of the devil in them than others though like the wanton groove driven Strip Club, a song that seduces and teases with all the tricks of a bar pole dancer, the rockabilly toned Buck Tooth Woman where the band have a sure touch of The Stray Cats about them, and Bean with its classic UK hard rock flavouring. As mentioned all the tracks hit the spot perfectly and have the desired effect  of pulling one to their feet to participate to some degree even the closing bluesy acoustic lined ballad Gone Blues. Once in its stride the song has lighters, voices and bodies swaying in unity with its mesmeric groove.

Grifter is an excellent rock n roll album, no more and certainly no less. It does not have to be anything more as it and the band deliver eleven pieces of pure and delicious rock music, what could be better?