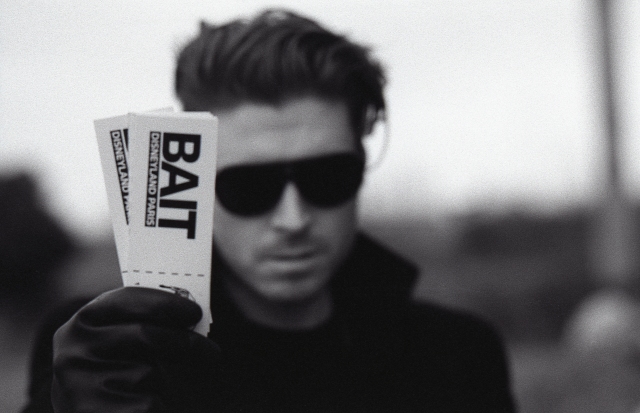 Going into the review of the new single from UK outfit Bait it took us by surprise just how long ago we drooled over the band’s self-titled debut album. It feels like yesterday but was at the beginning of 2017 so the fact that it still features on our just for pleasure ‘turntables’ shows how pleasurable we found it. DLP is destined to join that compelling full-length, the track a wonderfully nagging and rousing slice of the band’s unpredictable and riveting sonic imagination.

Southend based Bait first tempted almost taunted us with a track upon the Alternative Occupations EP from Cool Thing Records which featured four of its striking bands. The intrigue and appetite the song bred was richly fed by the debut Bait album, addictively satisfied by the unique fusion of punk, post punk, and industrial espionage which thrilled within. So you can imagine the tingle when the band’s vocalist/songwriter Michael Webster got in touch with their latest track. Of course there are never guarantees, expectations and assumptions always there to be shot down but not this time. DLP was another addiction in the waiting and a big excuse for us to again push you all towards the creative exploits of Mike, Luke Branch, Jim Webster, and M R E.

Synths instantly mark their territory as DLP takes a mere breath to calmly entice, its second exhalation springing a rapacious but inviting stroll impossible to prevent hips and neck muscles responding too. There is an inherent darkness and threat to it all though, that delicious niggle which has marked previous tracks from the band and simply accentuates all the hues and manipulative agility of the song.

At times it calls on ears and imagination like a tenebrific blend of Malicious Damage era Killing Joke, Dalek I/Dalek I Love You, and Nine Inch Nails, but with bleakness as radiant as it is dissonant. Even with those clues to their characters, song and sound are fiercely unique to Bait and barely come close to any true comparisons.

DLP is another invigorating and galvanic outing with Bait, an experience which challenges and rewards, questions and supports with unapologetic eagerness. If you have not checked out this band shame on you, the perfect moment though is now.

DLP is out now via Cool Thing Records.