We have a feeling that maybe 2019 is a year when UK bands will really stir up the world’s metal scene. Already there have been a handful of highly notable and thrilling releases to which you can now add the new Coup de Grâce EP from Devon hailing Torqued. Caged within its dramatic cover sits four tracks of voracious groove metal but tracks as progressively bold and atmospherically ravenous as they are compellingly infectious; all ready to prowl and devour the world.

Consisting of vocalist/bassist Marc Cleave, drummer Kurt Johnson, and guitarist Rimmy Sinclair, Postbridge’s 2016 formed Torqued has already lured strong attention and praise with early tracks and a debut EP, Resurgence, last year. Alongside, their live reputation has only escalated in line with the growth of their sound, the band making plaudit earning appearances at the likes of Bloodstock, The Mosh against Cancer, Amplified, and Rockfest amongst many more over time. Now, such its striking contents, expectations are easy that Coup de Grâce will only inflame both greater attention and acclaim

The EP opens with its title track, Coup de Grâce instantly teasing with a raw sonic lure before it becomes refined into a groove wound temptation within a suggestive electronically woven climate. Even as Cleave’s throat raw incursions emerge and the guitar brings greater threat to its wiring, that initial engaging temptation remains a potent presence. Increasingly predatory with every emerging twist, ravening groove, and rhythmic intrusion, every subsequent trespass echoed in vocal causticity, the track simply gripped and captivated.

The Revelation follows, arising from far off sonic mist in a web of interwoven melodic guitar threads and a rhythmic probing as rapacious as it is controlled. There is a Static-X hue to the track as it develops and blossoms, every breath and second bred in imagination and soaked in drama and though it does not have the same immediate punch and tempestuous impact, it hauntingly grew to eclipse its impressive predecessor.

Described as groove laden heavy metal, The Torqued sound readily embraces various hues, next up Open Wound evidence with its extreme tones and hostile textures coated in the rich allure of grooves and wired in melodic acidity. Further entangled in the dextrous craft of Sinclair’s enterprise the song prowls and preys on ears and senses, seducing both with its sonic intimation and imaginative within an unpredictable landscape before leaving The Darkest Of Shadows to close things up which it does with equally magnetic and enthralling adventure. In an electronically aided background bringing a host of dark and light suggestion, the guitar spins another sonic nexus as rhythms intrude and arouse with their own particular dexterity. Haunting atmospherics continue to as much tease as fear with their caliginous breath around the song’s full carnivorous trespass, it all going to make a song which is maybe not as easily devoured as its companions in some ways but emerges another major highlight from Torqued.

If the band does not quite launch itself on the broadest landscape of metal with Coup de Grâce it can surely only be a matter of time if we take the magnificent EP as the seeds to their future endeavours. No point waiting to see though, Coup de Grâce needs to be and should be your next port of call.

The Coup de Grâce is out now; available @ https://torqued.co.uk/shop/ 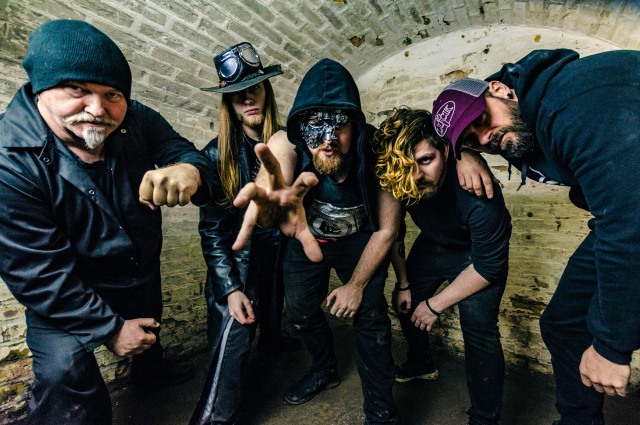 From their very first single a few months short of four years back, the sound of UK metallers Spreading The Disease has been a contagious eventful trespass which has evolved almost by the song let alone release.  It has been a growth driven by creative drama and rich imagination which is now unleashing its fullest, most striking roar within new EP, Mindcell; five tracks of ravening ferocity wrapped in bold enterprise which confirms and further establishes the Kent hailing outfit as one truly individual and compelling proposition.

As its predecessor, the Insurrection EP released late 2017, was borne from a bolder step in the character and enterprise of the band’s sound, so Mindcell openly reveals another thick step in its blooming. Into the EP’s fertile and atmospheric asylum Spreading The Disease weave their richest web of styles and flavours yet; uniting the familiar and the adventurously unique in a tempest of sound which just demands attention.

Obsession opens things up, an initial sonic stand swiftly pulling in a tempest of noise, aggression, and vocal ferity. As barbarous as it is there is also an instinctive virulence to the assault which only escalates as the track hits its savage groove. The throat of vocalist Connor Russell Snyder is a fury of emotion and threat but equally an incitement of feral melody as the song breaks from its wild incursion into a voraciously catchy chorus. From start to finish the track is superb, the rhythmic blitz of drummer Jack Apell and bassist Steve Saunders, the band’s founder, as manipulatively resourceful as it is hungrily barbarous and entangled in just as magnetic and enterprising exploits from guitarists James Falconer and Martin Osbourne with each broadening their imagination by twist and turn.

The mighty start continues as Voices rises from sonic mist, the disturbed edge of its intimation fuelling and springing the controlled but hellacious surge of intensity which follows. It too is just a vehicle for subsequent imagination to emerge, dark calm and insecure vocal reflection crooning before erupting in its own bedlamic fury. That too is just a moment breeding another individual moment, the song a fluid patchwork of schizophrenic twists spilling pure magnetism from start to finish; it all crafted with individual prowess and emotive intensity.

The following groove metal swing of The Anger Inside is just as potently captivating, the track equally a bruising and harassing slab of nu meets death metal  soaked rock ‘n’ roll easily and quickly getting under the skin. Apell and Saunders steer the track through ears with sheer power and riveting guile respectively with the sonic cunning and causticity of Falconer and Osbourne similarly stirring and imposing.

Just as forceful and rousing are the vocal exploits of Snyder, their adventure no more potent than gracing next up Waves. Its gentle melodic lapping of the senses borders hypnotic, guitars and bass colluding in an alluring kaleidoscope of temptation before being urged into more caustic endeavour by the scything swings of Apell. Again there is a feral a quality to sound and song even within its mellow serenading and a progressively lined enterprise which adds to its increasing irresistibility and inevitable persuasion.

Conflicted brings things to a just as rich and potent close; the track opening with a groove which is as familiar as it is tempting. Soon though it’s untamed heart infests every emerging aspect, Snyder masterful astride its contagious trespass. To this at times, there is a hue of bands such as American Head Charge and Mudvayne but great essences soon devoured and reimagined by the viral exploits of Spreading The Disease.

Quite simply Mindcell is the finest moment to escape the creative institution of Spreading The Disease, one which should draw the spotlight it loudly declares the band deserves.

Mindcell is out now through Surgery Records; available from all platforms.