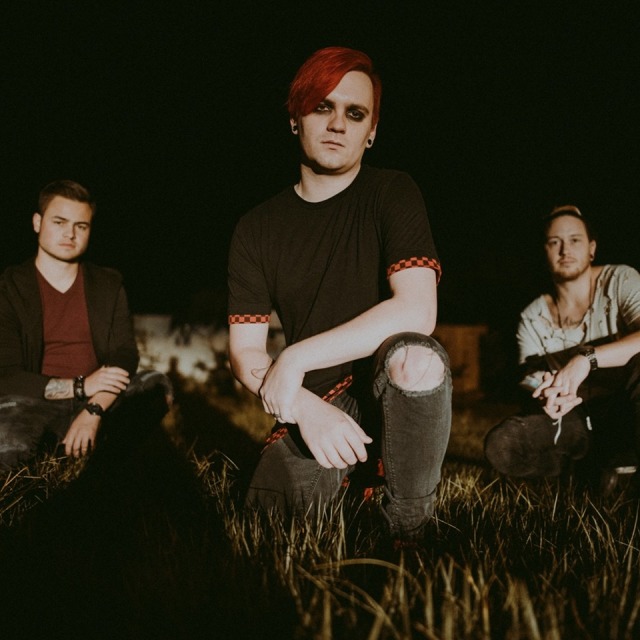 Some encounters immediately strike home others need time and attention to complete their full persuasion. The debut EP from Florida hailing alternative rockers Wake Up Hate sat somewhere in between. Certainly it made an enjoyable ear grabbing proposition from the off but with subsequent plays it unveiled its extensive tempting as the adventure and potential of its creators fully emerged.

Stepping forward late last year, the Orlando based outfit consists of vocalist Jake Adkins, guitarist Matt Browning, and drummer Triston Blaize. Quickly the trio released their first single, a song amassing over 60,000 streams since its release in late December. It declared their music a tapestry of textures employing heavy snarling riffs through to provocative ambiences, a blend which provokes thoughts of the atmospheric prowess of Linkin Park, the melodic intensity of Papa Roach, and the steely rapacity of Spineshank across their new seven track rich Deep Sleep EP.

The release begins with that previously mentioned single, The Cycle bubbling up from an industrial hued distance to surge through ears with voracious dexterity. Its deliberate stroll stalks as it invigorates; keys and guitars spinning a dark yet rousing web punctuated by uncompromising rhythms. Adkins vocals are just as magnetic with the track a mix of the familiar and individually fresh with unpredictability its companion.

Easy to hear why it has made such a potent impression since its release, the single makes way for next up A New Way to Hate. It too erupts with force and threat in its initial coaxing, a tempting only blossoming as its melodic and atmospheric intimation brews in keys and the fiercer throes of guitar. As its predecessor, it is a track which commands attention and like the first, sets a lingering impression and pleasure easy to embrace.

Over the Edge follows, the song a swift melodic smog of suggestion and emotion prowled by a great gnarly bassline. The band’s pop instincts flourish within its fire, catchiness as vocal as its tempestuousness and though the track did not quite rival those before it, there was no escaping being firmly held by its craft and enterprise as moments of real imagination and ferocity struck.

The EP’s title track equally captivated with a mix of rock pop engagement and creative as well as physical severity. Haunting melodies and intimation soaked keys collude with tides of metallic antagonism and angst across its landscape, the song another which needed further time to fully seduce but only teased ears and appetite towards thick pleasure from its first trespass.

Similarly Love Me Like a Hurricane took longer to enslave but with its inflamed and rousing chorus and kaleidoscope of enterprise never left thoughts looking forward or; a challenge that Not Worth Saving quelled with individual if not complete success. Even so both songs only added to and built upon the potency of the release leaving Blind Apologies to conclude the impressive offering.

The fascinating final song is an emotive haze of sound and passion, its cosmopolitan hues rich spice in its dramatic balladry as it brought the EP to a strong and alluring close. It is early days for Wake Up Hate but the song and its inventive confederates more than hint that we might just have something special emerging in our ears. Certainly the potential is there and the enjoyment.

Deep Sleep is out now.