All good things have to come to an end, the course of even the greatest glories finding finality and so it is with Belgian post black metallers Gorath as they depart leaving in place their sixth and final album The Chronicles of Khiliasmos. The band over the years has made a major impressive and acclaimed mark on the genre with their progressive blackened experimental explorations and the new release is no different. It arguably is not the final massive adventure one might have expected for a farewell, an explosive and dramatic statement, but as a fully enveloping funereal outpouring the album impacts firmly on thought and imagination to be ultimately rewarding.

Formed as a one man project back in the nineties by Filip Dupont, the band found a real presence with their released demos in 2003 which led to the release of debut album Elite in 2005 with Black Owl Records. The following year saw The Fourth Era appear through Descent Productions, the cosmological themed release finding strong acclaim for its Mayan based concept. It was at that point that the band became a quartet and ventured out live to over the subsequent years, share stages with the likes of Foscor, Watain, Graven, Darkspace,  Mayhem, Dark Funeral, Shining, Dark Fortress, Nazxul, Gallhammer, Primordial to name a few. Misotheism came next in 2008 to again impressive responses which grew stronger still when MXCII was released two years later. The Chronicles Of Khiliasmos follows last year’s Apokálypsis – Unveiling The Age That is not to Come and finds Dupont alongside guitarist Bart Put, bassist Raf Meukens, and drummer Bart Vanderheyden, bringing band and overall concept to a conclusion timed with the prophesised end…

The ConSouling Sounds released album is made up of three chapters, a trio of doom soaked tracks which complete a legacy which 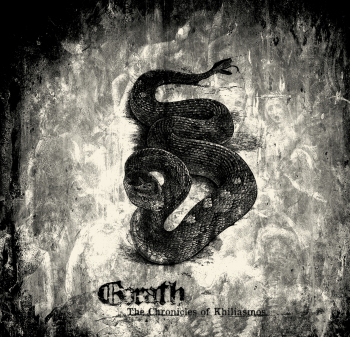 will impact black metal for time to come. Khiliasmos I begins with a dawning stir of guitar and seemingly random sonic pulses, the track taking its time to extend to its full height. It is a teasing presence at first toying with expectations that are waiting for the track to unleash something, Soon the scowling growls of Dupont enter to rile up the air though still the track resists offering mere fluctuations of energy within its prowling doom lit engagement, the song remaining relatively subdued and content to provoke and evoke reactions through intelligently inciting craft and imagination. It is the little incursions which invite the imagination to play within the track, the distant vocal sirenesque harmonies and insidious tones of Dupont within the exhausting repetition of riffs and intensity, distracting whilst igniting further responses to fine effect. The track possibly out stays its welcome before its ten minutes finishes with the senses, though the last couple do evolve into an acidic melodic stance which fires up the intrigue.

Khiliasmos II is a hungrier and more aggressive encounter, vocals and sounds bringing a surer thicker intensity and malice to their gait. The emerging groove brings an infectious lure to the song which within its first moments already has a stronger grip than its predecessor. The barbs of the track in hooks, grooves, and vocal additions, ensures a welcome compliance to its demands with the drums of Vanderheyden and guitar invention of Dupont and Put a magnetic pleasure. The track is easily the best on the album making a thrilling bridge between the opening and closing blankets of doom driven atmosphere. It at times makes for an uncomfortable listen as one immerses within with relish, but at the same time contrasts the vast and in comparison underwhelming pieces surrounding it perfectly.

Closing the album, Khiliasmos III is a massive soundscape of sonic clouds and vocal storms again brought with a labouring but compelling presence. At twenty minutes long, the track like the first maybe pushes its limits but does make every second of its encounter an impacting yet magnetic weight on the ear. There are small offerings of melodic respite for some alleviation from the incessant and oppressive blackened heart of the release but like the opener has its own emotive and imaginative aspects which makes it never less than provocative and like the album as a whole ultimately rewarding.

The Chronicles of Khiliasmos is a strong and satisfying release though it falls short of certainly the previous two albums from the band. It is still a worthy farewell from a band which has pushed black metal to strong levels over the years and will ensure whatever the members do next there will be an eager audience waiting.