Though inspirations are unknown, it feels a safe bet to suggest that Queens Of The Stone Age and especially Foo Fighters is among them going by Fuse, the highly enjoyable debut album from alternative rock band Clone Age. Ten tracks fuelled by energetically dynamic and melodically thick rock ‘n’ roll, the release is an impressive introduction to a Croatian quartet which, on this evidence, has the potential to break into much broader spotlights.

Formed in 2002, Clone Age has gone through line-up changes and creative breaks over the years whilst also earning a fine reputation across gigs and festivals for their live show, wining numerous regional awards into the bargain too. It was 2014 which saw the present union of vocalist/bassist Robert Kriković, guitarists Adrijano Valpatić and Nenad Rešetar, and drummer Marko Lajtman come together; a moment in time which seemed to spark a new creative energy and chemistry in the band leading to the writing and recording of a host of new songs which make up first album Fuse.

Recently released via Croatian label Dallas Records, Fuse gets straight to work on ears and imagination with opener Give Yourself To Me. A lure of guitar entices first, it quickly joined by the potent tones of Kriković, which in turn soon welcomes the beefy beats of Lajtman amidst a thicker sonic roar. That initial nagging hook enjoyably continues as the track breaks out big melodies and rousing vocals; it all courted by one tempestuously throbbing bassline. As quickly as the song’s sounds blossom so too does the Dave Grohl and co scent, a flavouring never dissipating in song and album yet at no point does Clone Age or Fuse become replicas without their own imaginative ideas and creative characters.

The feisty and quickly satisfying start moves aside for the following Should I Care and the continuation of the album’s attention grabbing prowess. Less imposing than the first, its melodies smouldering on the ear, the track still unveils a potent catchiness which colludes with a seductive landscape of imaginative and sultry textures aligned to stylish sounds. At times more hard rock than alternative rock sculpted and in latter moments a bluesy proposal, the song simply hits the spot with increasing ease before passing its triumph over to We’ll Make It to try and emulate. That it does with its rhythmic shuffle and vocal tempting within an anthemic bellow which again is as familiar as it is fresh and greedily devoured. In sound and voice, Clone Age has the knack of inviting and involving the listener in body and emotion, a continuing success across Fuse which maybe is at its height in this rip-roaring protagonist of the spirit.

Addition shares its own spicy hook and groove laced bait next, its swaggering body and reflective blues laced nature carrying a touch of Alter Bridge and Sick Puppies to it to great effect. The guitar craft and imagination of Valpatić and Rešetar enthrals and excites throughout, the former also providing some great backing vocals to reinforce the emotive potency of Kriković.

A calmer time comes with the southern laced and lively balladry of My Little Miracle, its gentler embracing coming with maybe the most tenacious and bold rhythmic proposal from Lajtman on the album whilst Wake Me Up whips up the body and passions with its bouncing gait and instant hook lined flirtation. There is a whiff of nineties indie rock to the song, but equally a disarming post grunge/alternative rock pop magnetism which has hips swaying and the imagination gripped with consummate ease.

From one pinnacle to another and the mightily addictive Never Enough. From its opening thick and grouchy bassline, the song is in command, writhing spice rich grooves quickly adding to the fascination. Relaxing a touch as it hits its mischievous stride, a pulsating spotting of fifties seeded keys start their seduction, popping in and out of the sinew spun and vivaciously hungry flames of heavy rock ‘n’ roll. Like Squeeze meets Bush meets QOTSA, the track is glorious; rock ‘n’ roll manna for the senses and passions which almost alone provides one of many imposing reasons for checking out album and band.

Save Me might have a less unpredictable and dramatic air and character to it next, but the song is an appealing tapestry of harmonic vocals and fiery guitar enterprise around a steelier rumble of bass and kinetic beats. It lets no one down in pleasure and anthemic potency before What’s My Name offers up its own restrained but infectious smoulder of melodic suggestiveness and emotive reflection. Hinting at further nineties grunge influences without being pinned down; the track is as intriguing as it is compelling.

Alone completes Fuse with a fusion of power pop and again grunge inspired alternative rock. Taking ears on a heady and contagious ride of sound and energy, it sums up the invention and recognisable but commandingly fresh sound and exploits of Clone Age perfectly; and tells you all you need to know about the band’s ability to write songs which almost demand physical and emotional involvement.

Clone Age will most likely be strangers in name and sound to you right now but it is something you should amend with Fuse. The reward is an adventure of rock ‘n’ roll to improve any day.

Fuse is out now via Dallas Records across many online stores.

Media Stres is an alternative rock band from Croatia which has already made some potent nudges on ears with their previous releases but now offers their biggest incitement on the broadest attention with new EP E.V.I.L. II. The five track release is the continuation of debut album E.V.I.L. (e-Virus Influenced Love), an encounter released in two parts with its second revealing the fulfilment and more of the potential fuelling earlier propositions.

Hailing from Cakovec, Media Stres emerged in 2012 drawing on inspirations from the likes of Biffy Clyro, Placebo, Muse, Royal Blood, and Punčke for their imaginative weave of sound ranging from alternative and progressive rock to post-punk and dirtier hues. Demo EP Fear and Panic was released in 2013 as the band unleashed their live presence and hunger which has since seen them play over sixty shows in Croatia as well as in countries such as Serbia, Hungary, Slovenia, Austria, and France. The first well-received part of the album, E.V.I.L. was unveiled in the December of 2014, an introduction for a great many to the band which quickly marked out Media Stres as a prospect to keep a close ear upon. Now the trio of guitarist/vocalist Karlo Komorski, drummer/backing vocalist Matej Obadić, and bassist Aleksandar Hutinec complete their first full-length with E.V.I.L. II, whilst setting down a new plateau to their adventure and invention, not forgetting compelling sound. 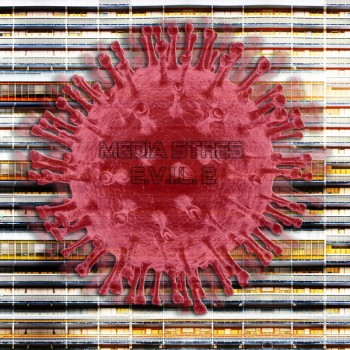 Whereas its predecessor was themed by a narrative concerned with the impact of technology on society and how corrupt that society became with said technology, E.V.I.L. II is the exploration of people living in the shadow of two super states and having to decide to which of the two they belong. It opens up with the scene setting Nations and instantly bold rhythms from Obadić provide an anthemic lead into the waiting narrative, the gnarly tone of Hutinec’s bass quickly adds its suggestive tempting to the coaxing too. In no time the equally dramatic tempting of Komorski’s guitar stirs up song and air, providing a sonic breeze around the hypnotic lure of increasingly pungent rhythms. It is thick captivation crowding ears and appetite, one blossoming further as Komorski unveils the song’s tale with his potent vocals as the song bristles and feistily simmers with an essence of Muse and at times something slightly Manic Street Preachers like.

The outstanding start slips into the just as enthralling and quickly addictive Right or Wrong. Making a more reserved but no less gripping entrance with bass and percussive jabs early bait, the track is soon entangled in the sonic and melodic enterprise of guitar and a spicing which plays in many ways like a mix of Fatima Mansions and Interpol. The moment when the protagonists in the album’s story have to choose their homes, the track paints the drama of the situation with a fiery blend of contrasting textures and intimidating shadows which line every shaft of melodic light and infectious flume within the intensive oppression involved. A progressively lit slice of contagious rock, the excellent track is matched in success and drama by the grungier tones of Consolation and its Bowie-esque colouring to another rhythmically and sonically dynamic incitement. Even with its rousing rock ‘n’ roll, the song’s emotion is dark and fuelled by a loss of hope again enjoyably presented by the vocal expression and strength of Komorski whilst bound in the band’s provocative endeavours.

The break out of world war is the canvas for End Times, an apocalypse sound-tracked by the song’s lively canter with melancholic melodies and, as ever, powerfully alluring vocals and highly persuasive rhythms. The song is persistently boisterous in its gait, its swing a perfect temper and spark to the solemn weave of words and emotions cast in something akin to The Smiths and Teardrop Explodes with again that Fatima Mansions like creative spicing involved.

Hope with its brooding climate spawned from the initial magnetic groan of bass completes tale and release. Shadows again encroach alongside the scything strikes of guitar and rhythmic rumblings whilst a solemnity coats the sultry melodic tendrils veining the rebuild of a desolated land and an increasingly receptive imagination to the invention and evocative theatre of Media Stres. The track is superb, matching all that came before and leaving a lingering compulsion for ears and thoughts to keep E.V.I.L. II alone a persistent companion.

The first EP of E.V.I.L. was an impressive and resourceful adventure but its successor simply overshadows it in every aspect. Media Stres may still be a secret yet to be discovered by a great many but expectations and hopes are that the band is set to receive the full attention and support their striking invention and music undoubtedly deserves.