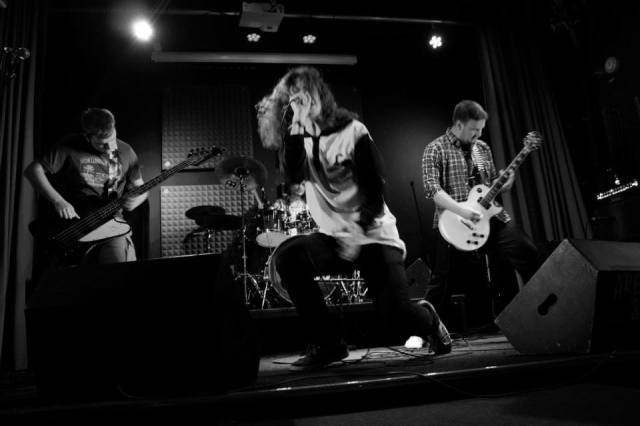 Providing a potential loaded and quickly satisfying introduction to themselves through their self-titled debut EP, Convoluted is a Swedish rap metal band beginning to make a hefty stir, certainly back home. Formed in 2014 by guitarist Stefan Stajkovic, bassist Michael Bergstrand, and vocalist Viktor Brus, the band has a depth and character to their sound which is much more than that previous tag implies. Merging an array of flavours it stands somewhere between Rage Against The Machine, Clawfinger, and Papa Roach, but additionally shows an open fondness for nineties grunge amongst other spices. It is a potion which going by the evidence provided by their EP, creates a slightly fluctuating but constantly rousing incitement.

With their line-up completed by drummer Oscar Ahlbin, Convoluted have become a potent live proposition on the Swedish underground scene, playing the likes of the Emergenza Festival and with fellow local bands such as Oviraptor Club and Mazed on their growing CV. Earlier this year the single Hospital Bed sparked online attention the way of the band through fans and radio shows alike, a success easy to see continuing as the band’s EP begins sizing up and confronting ears.

Recorded at Arena 305 and mixed at Weird Pony Studios by Bjorn Stegerling, the EP opens with The Doctor, a dark and sinister bellow that is as lyrically enticing as it is vocally and musically gripping. In no time ears and appetite are brewing a hunger for what is on offer; its hefty mix of flavours colluding to create an attention grabbing brawl of sound and creative energy sculpted in metal tenacity and getting the release off to a compelling and impressive start. 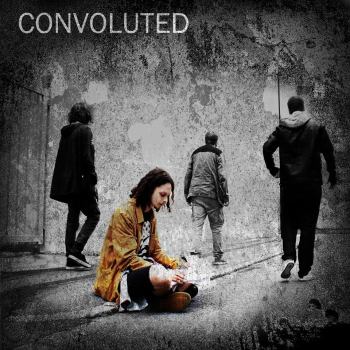 Decide comes next, announcing itself with a bait of tangy choppy riffs which definitely has a spice of Limp Bizkit to them. From there it expels a controlled but energetic stride; the ebbs and flows in its gait adding additional drama to the emerging feisty swagger of the song. The strong voice of Brus leads the antagonistic yet respectful attitude of the track with potent style whilst plentiful grooves and hooks line each aggressive move offered and every wash of fiery melodic endeavour. It is a raw and enjoyable challenge which at times does lose its spark but only for brief moments before re-asserting a pleasingly hostile roar.

The following Get Back Up has a bit of Bad Brains to its confrontation but equally that Clawfinger-esque quality, especially around the vocals and the understanding sounds around them whilst Hospital Bed gets its groove on early with a bluesy/grunge coating. These soon spiral into a sonic weave of enterprise around a sturdy and bracing rhythmic imposing, the blend a rousing tempest to the unmistakable RATM canvas of the song. Excellent when unleashing its volatility but also captivating in its melodic calm, though not always consistently gripping ears as it should have, the track is an attention grabber with a tremendous fury of a climax.

The EP is concluded by the predatory and increasingly adventurous proposal of If There’s A God, an encounter sculpted with tangy grooves and emotive intensity. It is the most unpredictable and thus exciting track on the EP, one which if anything does not go far enough with its unique invention. It certainly brings the release to a strong and magnetic end, with the EP top and tailed by its loftiest peaks of invention, originality, and sound.

Convoluted reveal plenty of potential across their EP and a thick dose of it in certain songs. Theirs is not a sound with its own unique voice yet and the release is not without limitations but both have sparked healthy intrigue and anticipation for what comes next from the band whilst thoroughly pleasing ears.

The Convoluted EP is out now via iTunes.