Providing another irresistible taster and invitation to their widely acclaimed, album of the year contender Rocket Out Of London, UK psyche rockers Damn Vandals are unleashing a new double A-sided single. Comprised of two tracks distinctly different but deviously united in stealing the passions, the release is a ridiculously contagious and venomously caustic stomp. Both Too Lazy To Die Too Stoned To Live and Cities Of A Plastic World worm under the skin with compelling ingenuity and voracious enterprise, offering another inescapable temptation bred from a riveting brawl of garage punk infused with psyche and stoner rock from the London band. Quite simply it is punk infused rock ‘n’ roll at its most rigorously captivating and addictive. 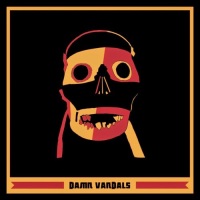 produced Rocket Out Of London set a new plateau for the band and template for emerging garage punk bands, the new single brings a stirring reminder with its sonic and deranged alchemy.

Both songs on the single provide a startling and magnetic scourge of unique sound and invention. Too Lazy To Die Too Stoned To Live makes an early vocal declaration before the track slips into a sultry and feverish stroll of melodic acidity and sonic expression. There is a sweet and sour twang to every slither of guitar incitement cast by Frank Pick whilst the bass of Adam Kilemore Gardens provides a throaty temptation which flirts with ears and imagination. Driven by the vibrant sinews of Chris Christianson’s beats and lorded over by the deliciously unique tones of Jack Kansas, the song finds a higher gear as it unleashes a captivating canter to its discord licked persuasion. Like Fatima Mansions meets Queens Of The Stone Age, with a flavoursome side dish of Engerica, the song is a glorious haunting of ears and passions.

Cities Of A Plastic World breeds its own distinct veining of warped endeavour, a web of drama drenched sonic intrigue from the guitars aligning with jabbing beats for a delicious nagging on the senses and thoughts. A mischievous intimidation comes with the bass lures whilst vocally Kansas again parades the lyrical narrative with devious and raw expression whilst pure virulence soaks the dynamics and discord fuelled breath of the song. Complete with psychotic imagination to its rebellious nature, the track is one of the band’s finest moments to date.

If Damn Vandals has managed to escape the clutches of your attention then getting your teeth into the infectious heart of their new single is a must. Theirs is a sound which seduces and infests body relentlessly right through to emotions for the richest long lasting rewards; the twin temptation Too Lazy To Die Too Stoned To Live/Cities Of A Plastic World the perfect vehicle for their corruption of your soul.

Too Lazy To Die Too Stoned To Live/Cities Of A Plastic World is available on CD and digitally on iTunes and all major download sites from 22nd September.