It is fair to say that the focus of plenty of the carnage and brutality cast by extreme metal songs protagonists are women; ‘weak’ dispensable victims to suffer and be abused as a theme. But now they have a voice and a just as lethal instigator to lead an uprising in the shape of death metallers Castrator, a band turning the tables and dishing out their own unrelenting revenge and creative ruin. The band consists of five pissed-off ladies, but each is also a skilled musician creating a voracious sound and in the shape of the No Victim EP, a debut release to match.

NYC based Castrator is made up of an international and prolific musicians hailing from Colombia, Florida, Mexico, Massachusetts, and Norway. Identities and background are scarce to be honest but the line-up of the band is vocalist M.S., lead guitarist/vocalist P. Serrano, rhythm guitarist M.D. Åkesson, bassist Robin Mazen, and drummer C. Perez. Their sound is sheer death metal ravishment which has led to references to Cannibal Corpse, Cerebral Bore, Dying Fetus, Incantation, Obituary and the likes coming their way. They expel an emasculating extreme brutality which certainly on No Victim rages lyrically, sonically, and emotionally on the listener like a primal tsunami. 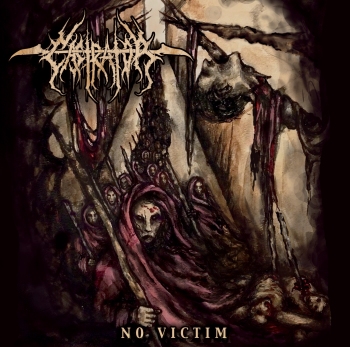 The first intensive examination comes with Honor Killing, a fury of ravenous riffs and excruciating rhythms from its first breath. There is no escaping its ferocious and rabid onslaught, or the melodic enterprise which subsequently veins the tirade of viciousness. The song also has a core swing to its tempest which is as contagious as the predatory riffery driving the incitement, whilst vocally the venomous deliveries have an intensity and uncompromising expression which instils even greater hostility in every syllable spilled. It is fair to say that the band is not worrying the outskirts of originality with the song but it barely matters in the thrilling abusing of ears and igniting of pleasure.

The following Brood has an even heavier destructive breath to its raging, every riff seeming more rabid and rhythm malevolent than the one before, a potency matched by the guttural vocal confrontations. Featuring a guest solo from Immolation guitarist Robert Vigna, the track grows in stature and dark devilry with every minute of every listen, bass imagination and guitar grooves especially flavoursome with their toxic endeavours.

The Emasculator opens on a sample from the film Hostel 2, male destruction the fuse to an unbridled and corrosive sonic devastation of the senses. Hooks and grooves again add inviting spices to the wall of rabid maliciousness but it is an avalanche of sound and rancor unafraid to twist and turn with unpredictable ideation and at times doom bred enmity. It is an outstanding track quickly matched by the EPs title track, itself a cancerous trespass of sound entangled in wiry grooves and blistering sonic spite aligned to a rhythmic tirade and discordance. As its predecessor, the track is a web of at times understated imagination, little turns and sparks of invention swallowed by the onrush of sonic and rhythmic violence but bold enough to still reveal their qualities.

The final two songs offer the strongest uniqueness upon the EP, and all leave appetite and bruised senses hungry for more. ‘Hell hath no fury like a woman scorned’ the saying goes, and now armed with the craft and attitude of Castrator, the worm has turned within extreme metal with exciting results.

The No Victim EP is available on CD now via Horror Pain Gore Death Productions @ http://www.horrorpaingoredeath.com/store/hpgd109.html and digitally @ https://castrator.bandcamp.com/album/no-victim-ep