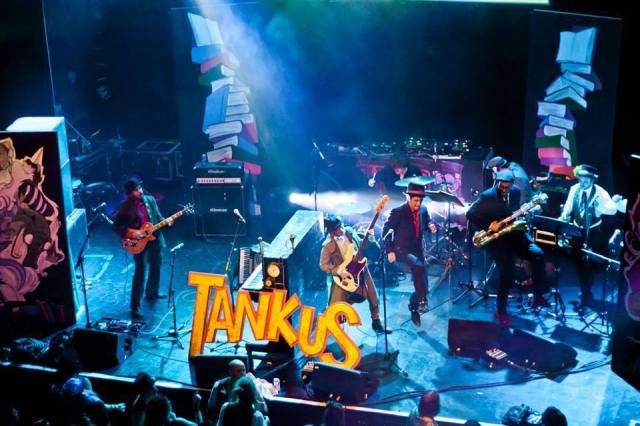 Such the potent riotous seduction and thrilling devilry of Cakewalk, the first single from the self-titled debut album of UK aural mischief conjurors Tankus the Henge, you wondered if it was the taster for something spectacular or the lead into an album which would be an anti-climax compared to the excitement and hunger the introductory track spawned. With a loud and dramatic confirmation it is undoubtedly the former of the two outcomes, the eleven track feast of what the band calls Carnival rock ‘n’ roll is a pulsating, riveting triumph of musical and lyrical eccentricity, exhausting imaginative adventures, and shadow wrapped dark revelry.

With the line-up breeding the scintillating album coming together in 2011, the sextet of ‘six sharped dressed and bedraggled gentlemen hailing from some of the more eccentric parts of London Town’ has ignited a major appetite for their insatiably inventive and explosive sounds across the UK, Europe and into the likes of America, Albania and the Isle of Wight through their live shows, this year alone seemingly a successful ride of festival after festival performances. The sound of Tankus the Henge is seeded in the eclectic beds of reggae, blues, and funk to ragtime and gypsy punk, the result something unique to the band though they have been described as ‘Like The Clash from New Orleans’. Imagine a creative and passionate meeting of Cardiacs and Gogol Bordello with The Kinks and Cockney Rebel and the inventive rascality you suspect is a strong but still hinting flavour of the fun the band provides.

The album immediately seizes the hand and leads the listener into the embrace of a jazz flamed, dirty floored New Orleans speakeasy

with Who’s Gonna Catch Ya, the melodic call of the trumpet from Jake Stoddart and sax of Louis Schultz-Wiremu heating up the atmosphere and setting the scene. Guitars and rhythms are soon strolling into the mix with a glint in their eyes as the excellent vocals of Jaz Delorean accompanied by his evocative keys unveil the scenic narrative. It is an addiction causing entrance soon enslaving the heart when the virulently contagious chorus reaps the submission of an already awoken hunger. With great vocal harmonies and back-up from the band to the gravel laced tones of Delorean, and plenty of delicious discord teasing across every aspect of the ridiculously infectious stomp, the track is an irresistible lure and persuasion into the album and instantly confirmation that yes the single was just the teaser to equally magnificent things.

The following Smiling Makes The Day Go Quicker opens with emotive keys alongside the expressive restrained vocals of Delorean. It is a gentle intriguing beckon which deepens with the beats of Will Stanley, which you sense they are waiting to trigger something, the fuse to an impending release of energy. The brewing evocative caress of the brass warm the ear further whilst all the time the emerging passionate fire of the song works away on the senses and imagination. It never explodes into the pyre hinted at but still creates a thumping and resonating joy of elevated passion and inciting pleasure, every part of the band and song merging into an incendiary and triumphant declaration before the greedy appetite. Its successor Hat has a more energetic intent but again is soaked in absorbing melodies from keys and brass, whilst the bass of Dan Mason roams the track with a mischievous presence behind the dual vocals of a dusty flavoured delivery from Delorean and the equally cleaner tones of either Mason or guitarist Tim Fulker, both contributing across the album but unclear who is joint leading this magnetic song.

Orange Is The New Black steps up next to seize the passions, its sultry stroll with tempting sixties Hammond keys through  Mediterranean spiced air a dramatic flight across provocative and elegant impossibly alluring skies. It makes the perfect appetiser for Cakewalk, the song still stealing top honours within heart and imagination. Swaggering through the ear with a mix of Ian Dury and early Squeeze to give a sense of its sensational enterprise whilst a lick of Mano Negra and Les Négresses Vertes punk folkiness also plays within its stride, the track is the scene of a colour drenched circus, Delorean the ringmaster to the contagion.

There is an exciting mix of sounds and invention across the album, emphasised by the likes of Lying and Recurring Dream, the first a gentle glaze of smouldering melodic kisses within a slightly darker reflective embrace, again a folk venture bringing evocation to the trip, this time with shadowed hues. The keys and sax wrap a mesmeric arm around the senses whilst the vocals offer their own tenderness within the at times wonderfully dark emotive skies, an ambience and texture to the presence reminding of Dizraeli and the Small Gods in their equally poetically emotive moments. The second of the pair stomps into a gypsy punk like encounter, the drums a rolling entrapment enslaving before the eagerly roaming guitar and bass dance their own steps within the smiling waltz of the keys. There is a XTC breath to the song at times to elevate its already lofty heights, but it is the Eastern European circus enchantment and pace that ultimately steals the heart.

Life Is A Grimm Tale (Sometimes) is another major pinnacle, its Creature Feature like darkness and Germanic wanton gait impossible to refuse and leave alone even after the song’s conclusion. Sinister and lusciously tempting with Delorean bringing a sideshow like barker descript for thoughts, the track is a unrelenting stalker of rapture, its epidemically catchy and forcefully rioting swagger the perfect bait. Its waggish romp is followed by the slow burning Riddles, a hazy blaze on evocative persuasion and noir washed mystery, and the brilliant tale of The Deviationist Society. The song from a pondering melancholic string and key suasion expands through Morricone like sculpted western hated climes and soulful brass and harmonica sighs. It brings strengths to its melodic and infection drenched sinews as its reaches further into its imaginative and fiery story, the guitars and keys finding that lure the best sixties TV show themes had and the strings providing greater passionate tonic to the sizzling heat of the song.

The album is concluded by The Last Days Are Coming, the track a scintillating final blues and emotion encrusted New Orleans funereal march through to the full ardour the album has evoked within. It is a mighty end to a sublimely gorgeous release. Tankus the Henge is a devil bred puppeteer for limbs, heart, and soul. A band which has fused light and dark, seduction and sinisterly honed persuasion into one of the most thrilling and sensationally addictive releases this year. Roll up and enter the welcoming to the dark carnival of Tankus the Henge, you will not regret one second of its fantastic touch.

If you are looking for a joyful and infectious party to romp through the summer with then UK band Tankus the Henge have the perfect soundtrack to match the revelry in their new single Cakewalk. The song is a teasing escapade through numerous flavours and mischievous sounds which wherever you hide your emotions it will find and ignite them into a stomp of contagious devilment.

Described as six sharped dressed and bedraggled gentlemen hailing from some of the more eccentric parts of London Town, Tankus the Henge since finalising their current line-up in 2011 has been on a whirlwind of live performances and the creation of their self –titled debut album from which Cakewalk steps forth. Brewing up a storm across the UK, Europe and into the likes of America, Albania, and the Isle of Wight, the London based sextet has created a carnival of sound and energy which leaves all drenched in invigorated rascality. Their music blends everything from reggae, blues, and funk to ragtime and gypsy punk, with the single the perfect introduction for all newcomers to a band described as ‘Like The Clash from New Orleans.’

From the opening crack of drums of Will Stanley and the fiery fanfare of brass from trumpeter Jake Stoddart and saxophonist Louis Schultz-Wiremu, the song leaps and romps around the ear with the energy of a playground and enterprise of a colour drenched circus. It is an irresistible temptation taken to another beach of persuasion when vocalist Jaz Delorean dances vocally over his simple contagious keys whilst the bass of Dan Mason prods it all with its throaty taunts and the guitar of Tim Fulker skates around and into the addictive charm to flesh out the brewing heat and lyrical exploits. The best way to describe the song is Mano Negra, Ian Dury and the Blockheads, and Gogol Bordello meets Chas & Dave hand in hand with early Squeeze and the Flaming Lips, or to put it a better way something which is deliciously riotous and incendiary to the passions.

Cakewalk is one of those simple and honest treats which no matter your prime tastes, lights up the day and heart with a virulence which is unstoppable. Go get infected by Tankus the Henge is our suggestion.