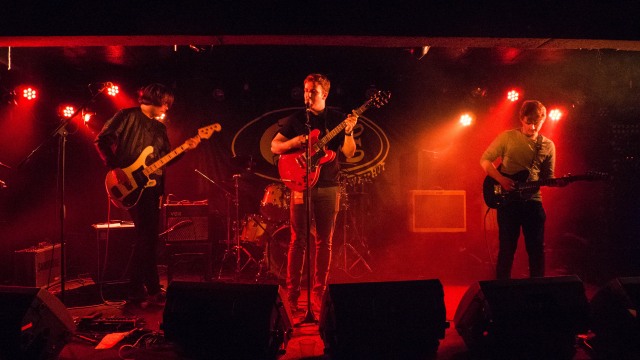 Not having previously come across their previous trio of singles, their new track Bring on the Rain is our long overdue introduction to Indigo Sixteen. It is a compelling jangle of indie/punk devilry from a band looking ready to step into the long line of unique and compelling Scottish propositions of decades past.

Creating a sound which by design or chance embraces the essences of classic bands like Scars and Josef K as well as British outfits like The Libertines and Skellums, Edinburgh hailing Indigo Sixteen emerged in 2013. Leaning on inspirations ranging from Kasabian, The Smiths, and Joy Division to The Jam, Daft Punk, Kraftwerk, and Nirvana, Indigo Sixteen previously released the singles Decide (2014), And What? (2014/15), and Come and Go (2016). Now it is Bring on the Rain ready to stir greater attention the way of the quartet and as it plays in the ears it is hard to imagine it not rousing up a host of new fans.

The vocals of guitarist Stephen Mallin pull the song into view, the equally alluring creative clamour of fellow guitarist Matt McPherson adding its melodic jangle to his and the rhythmic shuffle of drummer Callum Davidson and bassist Andrew Stears. Carrying an energetic and virulent swing to its gait and spirited tenacity to its character and enterprise, the song reveals its punk and indie sides with zeal, merging them into a proposition maybe not yet truly distinct but as gripping and exciting as you could wish for.

Those earlier suggested flavours swiftly come to mind in the song to add to its appeal and a quickly bred anticipation for the next band’s next steps.

Bring on the Rain is out now.