There has been an increasingly loud whisper in recent times casting good things about Scottish metallers Blackwork and now with the release of their debut EP, you can expect it to become a more forceful roar. Impasse uncages five tracks of ferocious multi-flavoured metal which maybe falls slightly short of a dramatic startling of ears but easily sparks the imagination and incites a lingering appetite to hear more of the band’s inventive sound.

The Glasgow bred Blackwork was formed in 2014 and quickly lured local attention with a three-track demo and an uncompromising and invigorating live presence which over time has seen the quintet play with the likes of Xerath, Bloodshot Dawn, and Exist Immortal among many. Last year saw the band begin work on the writing and creation of the Impasse EP and its certainly memorable fusion of everything from groove, progressive, and varied strains of extreme metal to hardcore and other equally fierce flavourings. The result of the band’s intensive time crafting and honing their release and sound provides, from start to finish, a commanding and attention grabbing wide spread introduction to their mouth-watering potential and imagination fuelled exploits. 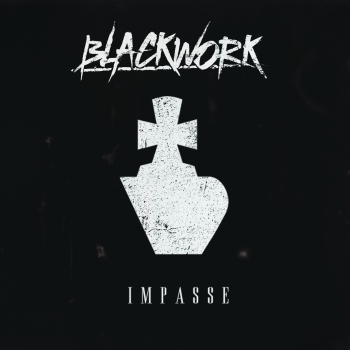 Alias opens up the EP, emerging on a melodic breeze within a warm atmospheric coaxing. In no time imposing rhythms and strands of wiry guitar badger and wrap ears as the track’s aggressive and intensive nature takes over. The growling tones of Josh Graham swiftly add their expressive weight to the proposal, whilst simultaneously a swinging swagger, led by the captivating bassline sprung by Tony Dunn, unveils its infectiousness as magnetic grooves and hooks inventively sculpted by guitarists Greig Cunningham and Chris Dunn align with their own caustic riffery. There is a touch of Lamb Of God to the track, maybe a whiff of Devildriver at times too, yet every twist and turn revels something if not majorly unique certainly individual to the writing and imagination of Blackwork

It is a great start matched by latest single Filthist, a similarly structured but instantly more volatile and antagonistic incitement for ears and appetite. There is a venomous toxicity to the grooves and melodic suggestiveness of the song; a belligerence as open in vocals and the barbarous nature of the rhythms too. Equally there is a punkish element to the track; that hardcore essence pleasing ears as it gets woven to the adventurous maelstrom of diverse sounds and intrusive textures.

Unguided needs barely a second to take its hold of ears and imagination; the initial hard rap of Chris Vezza’s beats breeding a predacious collection of hungry riffs and prowling grooves quickly straddled by the vocal animus of Graham, he in turn backed as potently by the band. With slithers of progressive and folkish resourcefulness within its rousing and cantankerous onslaught, the song is an irresistible tempest taking best track honours. Mellow emotive passages bound in poetic melodies only add to the fascination and intriguing nature of the track; merging perfectly with a tempestuous heart and the song’s vicious ferocity and touch.

The EP is completed by firstly the aggressively flirtatious Rust with its again great mix of metal styles and the releases’ title track which maybe made the least dramatic impression on personal tastes yet never allowed a moment to pass where ears and imagination were not fully involved in its creative blaze. The final pair were equally slow burners on ears compared to their successfully more instant predecessors but each only rose to captivate and reinforce the EP’s impressive persuasion.

Impasse is a powerful and increasingly enjoyable first look at Blackwork; a release stocked with the potential to stir up greater and broader attention the way of the band and set them off to greater creative heights.

The Impasse EP is out now @ http://blackworkband.bandcamp.com/releases