Every music lover can share a song or release which sparked the fight and defiance in them against either the world’s injustices or issues of a more intimate experience; encounters which trigger a renewed strength in their resistance. Fear Me December offer a quartet of such incitements within new EP, Crystallized; tracks which tap into the issues and resolve many suffer across varying areas. They are also four songs which have the body and spirit bouncing to soulful and boisterously rousing roars announcing Fear Me December as one rather potent proposition.

Formed in 2012 by Argentinian born vocalist/bassist Victoria Cabanellas and lead guitarist Valentin Macagno, Fear Me December began as a trio with the addition of drummer Emiliano. The band released their well-received debut EP, Who Cares in 2014 before taking the decision to relocate to the UK that same year. Basing themselves in Manchester, the band soon hits the live scene, touring the UK and playing festivals to begin sparking the same level of support and attention they garnered in their homeland. The departure of Emiliano back to Argentina could not stop the remaining pair from writing and working on their first album, the Matt Ellis recorded Between Violence And Silence released in 2016 with Chris Inman providing drums. 2017 saw the band’s current and stable line-up in place with Tony Small swinging the sticks and Stuart Woolley bringing rhythm guitar into the mix, the foursome now providing a rich statement of intent with the seriously magnetic Crystallized. 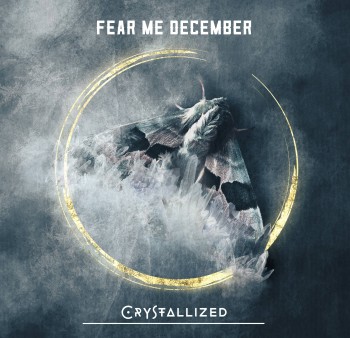 A creative tempest of aggressively melodic metal and rapacious heavy rock, the EP starts with Fight Me, a song surging with defiance and a rigorous confrontation from its first breath and the opening forceful rally of Small’s beats. It is an insurgence which is soon joined by the sonic impetus of the guitars and the darker throated threat of bass; it all uniting in a tempestuous front bursting with swift enterprise and the contagious presence of Cabanellas’ voice. Inescapably infectious without losing its threatening snarl and predacious bite, the track is superb emerging as one of our favourites this year; the web of metal and rock ‘n’ roll skilfully manipulated and manipulative.

Not Wired the Same follows, its rise less imposing but just as insistent as guitars weave an alluring invitation within a tide of hungry riffs and a throaty bassline to swing upon. With Small’s beats again sparing no measure of aggression even in the song’s slightly less ferocious charge compared to its predecessor, the track just as easily got under the skin with its lyrical exploration showing an understanding to depression and the instincts of the suicidal.

Two tracks in and the EP has proven one of the year’s most enjoyable offerings and does not let that success slip as it shares its final pair of tracks in This Is Not Ok and its title track. The first has a calmer stance soaked in melancholy but is soon releasing an instinctive catchiness rippling with energy and soulful intimation especially in its insistently rousing chorus. Its ebb and flow captivates; the caress and surges of the guitars igniting further enticement to match that of voice and another potent rhythmic provocation.

Closing song, Crystallized, is a fiery proposition; rom the off its flames veined by wiry tendrils of guitar and driven by the almost predatory touch of bass and drums. Cabanellas is again a winning lure in the midst of the bold adventure, even with her distance siren calls in the song’s relatively mellower twists. Providing a last furor of emotion and enterprise to the EP, the track is another truly magnetic and highly memorable moment, a description applying to each song and the release as a whole.

With Crystallized, Fear Me December has declared themselves ready to burst right out of the UK metal/rock scene into rich attention; with more of the same ahead it is hard to see them failing.

The Crystallized EP is released September 7th through all platforms.