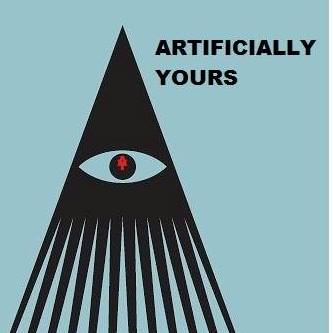 Ravenously invasive, teasingly seductive, and verging on the creatively psychotic, The Merger EP is the new three-track offering from British trio Artificially Yours. It is a release which has been eagerly anticipated, especially since the Essex outfit’s recent link up with 1-2-3-4 Records; one which rewards that intrigue with a ferociously compelling dissonance fuelled adventure.

Created by vocalist Chat soon after the demise of his previous project which hailed its departure supporting Killing Joke, Artificially Yours has grown from an initial solo project to the three pronged attack of its founder and the electronic prowess of Grumb and Ad. Their sound is a rabid eddy of noise and imagination; post and garage punk thickly lining its distortion fuelled space rock with the rabid tendencies of many more rich flavours involved. Aligned to a lyrical and vocal trespass invading and echoing the growing dystopian landscape and the controlling selfish hands shaping it, it all makes for a proposition which makes you pay attention and question the world, one’s own thoughts, and indeed the magnetic almost feral incitement the band offers.

The Merger opens with its title track, a senses suffocating smog of sound as corrosively apocalyptic as it is coarsely captivating. Sonic winds buffet ears and imagination as rhythms swing, Chat’s vocals with their invasive threat and echo equally as magnetic within the inventive maelstrom. Swiftly it is an infectious affair and as quickly a debilitating irruption but one with imaginative control to its visceral tempest and raw temptation. Though having its rabid claws in ears and appetite almost straight away, it grew its addictive persuasion by the listen; a transgression on the ‘coffee cup capitulation’ steering modern society , as declared by the band, which just gets under the skin and into the psyche.

The following Terror Town matches its predecessor’s stirring heights with its own fully individual character and prowess. Slowly stirring its body into action, the song slips into a magnetic stroll with a somnambulistic air where post punk seeds and electronic intimation collude. Akin to a fusion of the infectious prowess of Tones On Tails and the carnal dexterity of Big Black wrapped in the wiry strands of The Jesus And Mary Chain, the seductive track is swift and ever increasing intoxication; its own intemperance exposed in great woozy bursts of keys within the vocally dark, rhythmically moody exposé.

Final track, Tree, uncages its own uniquely carnal proposal, one as virulently catchy as it is unapologetically frictious. Its psych rock breeding is smothered in unruly noise and enterprise though neither can diffuse its infectious swing with a definite touch of T-Rex meets Joy Division to its nature and tenacity. Adding yet another distinct eclectic shade to the EP, it makes for a glorious end to one striking release.

Formed last year, Artificially Yours has already been stirring up keen attention and can now expect tides more through The Merger. If the world is going down, it could not wish for a better soundtrack with just a glimpse of a survival plan.