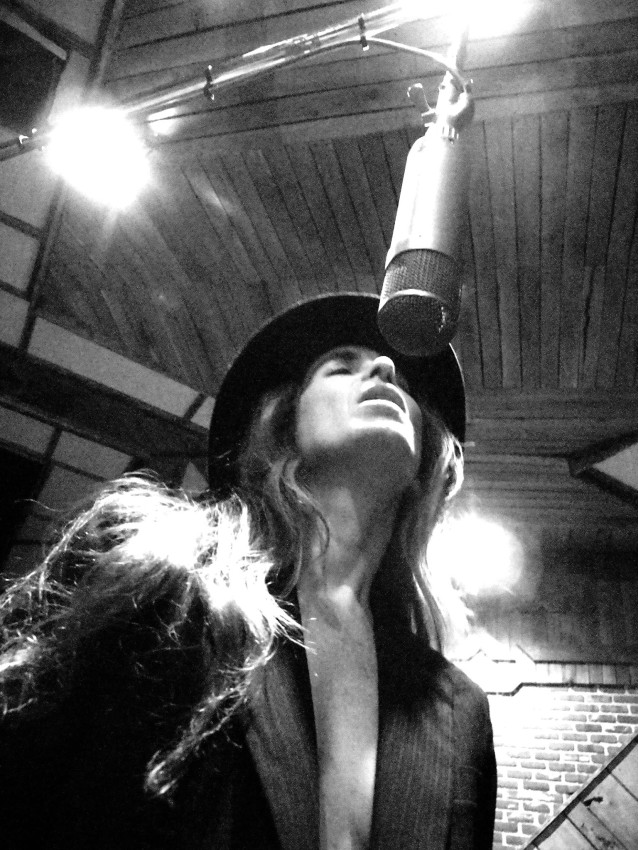 Hailing from New York City, Marla Mase is a writer and performer, producer and singer songwriter who has earned a feisty and impressive reputation for her compelling songs and expressive lyrics amongst many things. Following two acclaimed and eagerly received albums, the artist unveils her new eight track adventure Half-life. Diverse and an emotive look inwardly and outwardly at life’s struggles, emotions, and obstacles, the album is a fascinating insight into the world of its creator, a release which takes a serious investigation to its themes whilst having and providing its most magnetic quality, fun.

Mase as mentioned drew strong praise and attention with her previous releases, A Brief Night Out which was a rock opera/theatrical play performed in theatres and Speak, an encounter eclectic and adventurous in sound and imagination. The album also spawned Anna-Rexia (and a dub mix version by Bill Laswell), the song now spearheading the STAY ImPerfect Forever Project. Following the successful Speak Tour, ‘a multi-media theatrical event exploring the themes of body image exploitation, involuntary confinement, the silenced and the silent combining spoken word, video imagery, music, and theatrical spectacle to celebrate the raw reality of the human condition’, Half-Life reinforces and expands the emerging world presence of Mase with more of the incisive and unique invention already persuading her homeland.

The release opens with the brilliant Drown in Blue, a bluesy punk stomp with fire breathing guitars and self-challenging 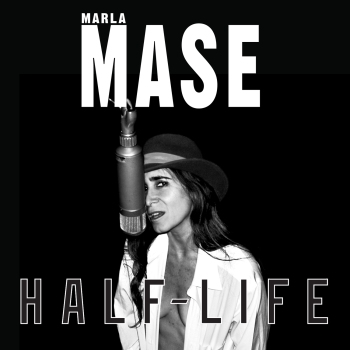 provocative vocals. Ripe with hooks and a swagger from the first second, the track glares at the senses with a raw and confrontational incitement of sound and attitude, the voice of Mase slightly Debbie Harry like and the song something which would not have been out of place on the first Blondie album. Self-critical and revelatory with an edge to its honesty which equally coaxes thoughts of bands like L7 and Au Pairs, the track is a full and irresistible captivation.

The impressive start is followed by the mesmeric title track, a hypnotic rhythmically framed lure with a celestial ambience and seductive pop rock elegance. The song gently strolls across the senses through to thoughts, the drums of Mike Faulkner providing the guide rail to prevent being lost with the skyward spiralling melodies amidst blazes of jazz bred sax from Mark Henry. After the provocative lively dance of the opener, the song is a warm breeze to drift along upon, a glide embracing the shadows and noir kissed caresses which line its journey and the excellent enthralling tones of Mase.

Things That Scare Me (the 2014 Club Version) comes next bringing another twist in the release’s presence, the song a funk blessed tango which bounces and seduces with almost toxic charm and persuasion. Soon springing thoughts of The Tom Tom Club as it roams around the ears, Mase lists obstacles and ills which challenge her stride through life whilst the sounds darken and lighten with a pulsating and riveting mischief around her. The song provides another fully loaded contagion within the release, its presence offering a rampant exploit for any dancefloor or intimate dance of self-reflection within four staring walls with equal success.

Next up The Heart Beats walks through a sultry ambience with a full yet simmering heat of passion and spoken incitement of thoughts, an almost meditative rhythmic holding of attention working with the prowess and strength of Mase’s words. Featuring Bill Laswell on bass, it is a provocative stroke again bringing a distinct and original twist in the course of the album, as does the melodic rock canter of Gaping Hole with its merger of blues and R&B, and not for the first or last time excellent backing vocals to support the unfussy delivery of Mase. Though neither song matches earlier and latter heights both seduce and provide a lingering suasion to find a greedy hunger for.

After a blues soaked acoustically shaped reprise of the opening song, Bitch in Heat steps up to unveil another funk prone romp of blues and rock attitude. Including Charlie Funk on backing vocals and a great flame of harmonica from David Barnes, the track infects the imagination and passions with a confidence and exciting escapade of musical skill and eye to eye honesty, all wrapped in a slightly caustic and highly pleasing surface glaze.

The True Groove production released album is completed by Hold Fast Your Dreams, a piano and vocal led enchantment written by Louise Driscoll, Roberta Mase, and Mase herself, the song taking inspiration from a poem by Driscoll of the same name. Also featuring Tomás Doncker, James Dellatacoma, Manu Koch, Josh David, Kevin Jenkins and more to help bring the release to life, Half-Life is an exciting companion providing constant unpredictability and creative adventure to ears and thoughts. Marla Mase is still a bit of a secret outside of the US to a great many but not for much longer you feel with treats like Half-Life.