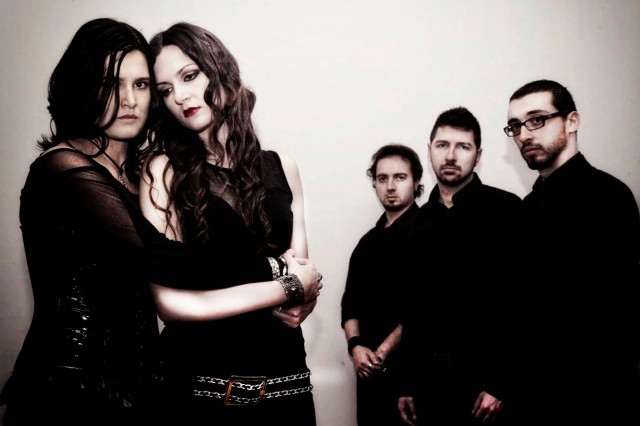 Amnio, the debut album from Italian band Raving Season, is a release which challenges and provokes with a striking sound and imagination which however you feel about it lingers with its memorable presence. Hailing from Rome, the sextet has created an album which fuses the passionate melodic tones of gothic metal with the intense oppressive breath of doom, expansive almost carnivorous atmospheres soaking the listener in deep and forcibly expressive emotive atmospheres. Constantly intriguing and magnetic, if at times labouring within its own creative exploration and occasionally a battle on the senses, the release is a compelling and imaginative excursion through the melodrama and darkest shadows of emotions and life.

The seed of Raving Season came with the meeting of the band’s two vocalists Judith (clean) and Federica (coarse) with guitarist Sergio. Initially with the intent to blend death and doom metal with openness to other rich spices, the band evolved its distinct sound over the following years as firstly guitarist Marco S. joined the line-up and then after the release of the debut The Brightness Of My Disaster EP, came the addition of Paolo (bass), Laura (keyboards), and Stefano (drums).  Two years in the making and seeing a new bassist, also called Marco, and Luca now on drums, Amnio is the potent full introduction to the band and their impressively textured sound which persuades with a voice sure to please fans of the likes of Draconian, early Anathema, My Dying Bride, and Isis.

A warm yet almost ominous wash of ambience soaks the ear first as the first up Turandot opens its welcoming arms, intensity and 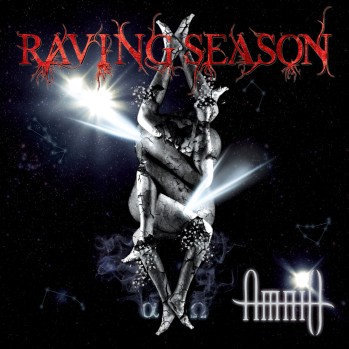 energy rising the closer it comes into view expelling a scowl of shadows aligned to the great grizzled growls of Federica which court their temptation. The track conjures a dark embrace with guitars and bass scything a sinister narrative which is suddenly reined in as the melodic heart of the track opens up its sun with the full tones of Judith and her operatic strength scorching notes and air. On this track certainly, her voice takes a little while to take to, if ever wholly accepted when she is truly searing the ear, but it is a thing of personal taste only as like to the opposing style of her companion, there is an undeniable skill and depth to be admired. The song itself is a strong draw into the release if unspectacular but it does spark rewarding thoughts and emotions to its fluid course.

The following Dusk Dance and My Last Murderer continue the good start, the first an melancholic seduction with prowling shadows which goads and inspires the atmosphere to evolve with feistier dramatic colour and intensity whilst its successor offers a similar start before twisting back on the senses with a malicious technical taunting to the guitar and invention driven by the aggressive venom of Federica. It is a superbly mixed pairing of light and dark, a beauty and the beast like tempting to the sound which evokes gothic hues upon the imposing canvas of the song.  The second of the two is the start of an elevation in the impact and appeal of the already pleasing release, the next up Silent Lake taking thoughts on a darkly lit float through expressive and bracing emotion rife with menace and danger framed by powerfully evocative strings and keys whilst Restless Rain (The Noise of Rain) provides a stimulating and epic soundscape within the confines of dark corridors and troubled hearts. It has a doom laden gait, a slow and lumbering prowl ridden by an excellent mix of harsh vocals unleashing demonesque enticement within a patient beauty.

There are moments where the album arguably labours over aspects and its intentions, losing the spark and grip which enthrals in other moments and allowing thoughts to drift at times, though the best two tracks on the album My Darkest Season Pt. 2 and Suspanded in a Spiral have no problem in securing total focus. The first is a glorious emotive hug with Judith bringing her finest performance and balance on the album, the euphoric depth of the song tempered by fine growls providing the most inspiring and imagery crafting moment of the album, and the second a rapacious and hungry stretch of intensity and aggressive enticement, Federica leading the fiery and majestic assault. Easily the best track on the album it tests and seduces with skill and invention, showing the further promise of the band in which they will hopefully stretch out ahead.

With the fine instrumental title track bringing an end to the My Kingdom Music released album, Raving Season is a band to take note of, even if Amnio does not quite stoke up a blazing fire inside for its undeniably creative offering.