Want to meet the best punk rock band in the UK? A big claim to be laid at the feet of a band for sure but using their debut EP The Invisible as evidence, that is what Welsh band The Bambi Killers is at this point in time. With the wicked wantonness of Karn8, the sexy attitude of The Objex, the mischief of Dirt Box Disco, and the snarl of The Duel and L7, the quartet from Swansea have it all to go down in punk history. Big swinging riffs, raw energy, and vocals to send tingles where tingles have no right to be, The Bambi Killers is a riot in every sense and pleasure.

The band consists of Cluffy on vocals and rhythm guitar, guitarist Pumba and bassist Muppet with both providing backing vocals, and Bom on drums. Together they are a vibrant and action packed unit which leave nothing in the locker in their songs and we are reliably informed neither in their riotous live shows. They have the heart and essence which made the likes of Vice Squad, X-Ray Spex, Ruts, and The Adicts so important back in the day but fire it up with rock n roll which is instinctive and driven by the energy of today. Combined it makes for, certainly in the case of The Invisible EP, sounds which ignite all the passions and feed all the insatiable needs of any rock heart.

The release opens with the song of the year, Don’t Be Invisible. A confrontational taunt to the apathy of gig attendees 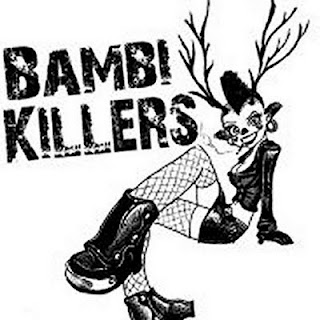 and the no risk lone easy life attitude of people as a whole, the song is simply glorious. The song immediately erupts in suggestive riffs and growling bass lines whilst Cluffy challenges with word and intent.  Persistent and combative without delving into violence the track is a prowling devil which leaves nothing in doubt and provokes a reaction in all. The voice of Cluffy is a sultry mix of Dominique Lenore Persi (Stolen Babies) and Agnete Kjølsrud (Animal Alpha, Djerv) and sits alongside Kirst of Karn8 as the sexiest voice in UK rock. The ironic thing about the track is that those it is poking a finger at will be caught up in and aiding its anthemic might, safely from their bedrooms no doubt.

The following Get Up Get Out Get Off slams into the ear with immediate energy and enthusiasm. A more directly driven track it is a storm of feisty riffs and jabbing rhythms speared by a catchy addictive chorus and scorched guitar strikes. Like many punk classics it is simple and to the point whilst igniting the deepest satisfaction. Less intricate and varied as its predecessor, the song shows that The Bambi Killers can deliver rock n roll in any form with accomplishment and passion.

The Weight Of The Morning swaggers up next with attitude to the fore and forceful sounds to back it up. Like Spinnerette meeting Bikini Kill, the song crawls all over the senses like a lustful teenager though with more restraint than they can ever find. With an almost hypnotic lure the track is a feast of thumping beats and ear stripping riffs but when it drifts into a slow seductive aside it triggers ferocious fires and it has to be said the soaring sounds of Cluffy at this point brings a sign not only to the lips.

Hmmm moving on….. the release is completed by the outstanding Lights Out to complete a four point slab of excellence. With the urgency and melodic flavouring of early Clash or Vibrators, the song is another sing-a-long treat of style and skilled energy, and like its partners in crime another which one cannot resist desecrating with their own voice.

The Invisible EP is stunning and its creators a band set to turn UK punk rock, if not further afield, on its head. Watch out world The Bambi Killers are coming to get you.