Basking in its own dirt and scuzz, the Suicide Generation sound is a fervid rush of trashy goodness which ensures the band’s new album is an unmissable treat for all fans of uncompromising rock ‘n’ roll. The bastard son from a salacious collusion between members of Atomic Suplex, The Cavemen, and Trash Culture, the London based punksters feverishly graze ears with a raw wash of garage punk/rock from start to finish within their debut full length 1st Suicide, sucker-punching the senses along the way with rapacious hooks which just worm into the psyche like a virus.

Supposedly coming together “to fill in for cancelled support slots across the Tuesday night London gigging circuit”, Suicide Generation has quickly become an eagerly devoured proposition on the capital’s live scene with their chaotic and explosive shows; their attack and intent as unpredictable as their sound. Recently linking up with Dirty Water Records, the band is now gunning for bigger attention with 1st Suicide, a release which swarms through ears like a plague of buzzsaw carrying harpies. 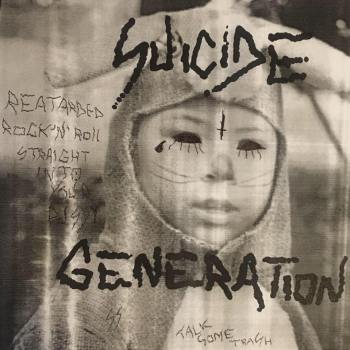 The album descends on ears with opener Suicide Generation first of all; one minute and a handful of seconds of clanging rock ‘n roll led by the exasperated tones of frontman Sebastian Melmoth. Every aspect of the track is as muggy as it is concussive but veined by intricate melodic acidity which winds seductively around the fuzzy antics of Emily Crowler’s rhythm guitar. It is a potent, enticing smog of sound swiftly out powered and shone by Why Can’t I Play With You. The second track needs mere seconds to lay down heavy seductive hooks within a similarly intensive weight of sound. A Cramps-esque hue smokes vocals and sound alike, Suicide Generation finding a gripping rawness which even their assumed inspirations would have eagerly embraced as the song flirts and dances with garage rock and punk irritability.

Set Me On Fire has a certain air of The Reatards to its similarly crotchety rock ‘n’ roll straight after, guitars scything across the senses as rhythms rumble with tenacious zeal, while Nora aligns a fifties smoulder with seventies punk waspishness for its individual stomp. Both tracks have the body and imagination eagerly throwing discord loaded shapes before London Blues strolls along with dirty blues punk falling like drooling saliva from every note and syllable. An open psychosis oozes through voice and music alike, its mercurial heart unpredictable and constantly in flux as it captivates and assaults the listener.

They are instantly involved with the brawling escapade of Love Is Hate straight after, the track a beguiling animus of sonic and emotional testiness enjoyably harassing the senses with the clamour of guitars and the spite of rhythms. It is a mix also fuelling next up Little Mama, the track resembling The Phantom basted in rock ‘n’ roll filth whilst sending the hips into an anxious frenzy.

That same instinctive primal sound infests Evil Everywhere and once again the band twists it into something distinct within the release and other propositions; the track a hyperactive dirt ball of sound and energy leading into the closing treat of You Love Me. Initially prowling ears with a devious glint in its creative eye, the band’s punk instincts soon ignites in a high-strung blaze of sonic causticity and wired verbal dexterity driven by rhythms which just seduce attention whether the track smoulders or roars.

1st Suicide is a collection of songs which just please themselves with a similarly arrogant creativity, in turn their brashness and swagger turning on ears and an ever keen appetite for unpolished rock ‘n’ roll. The Suicide Generation is here and openly ready to tear up your world.

1st Suicide is out now on Dirty Water Records @ https://suicidegeneration666.bandcamp.com/releases and http://www.dirtywaterrecords.co.uk/shop/#!/Suicide-Generation-First-Suicide-album-download/p/86922972/category=2749844