The Aquabats – Kooky Spooky In Stereo 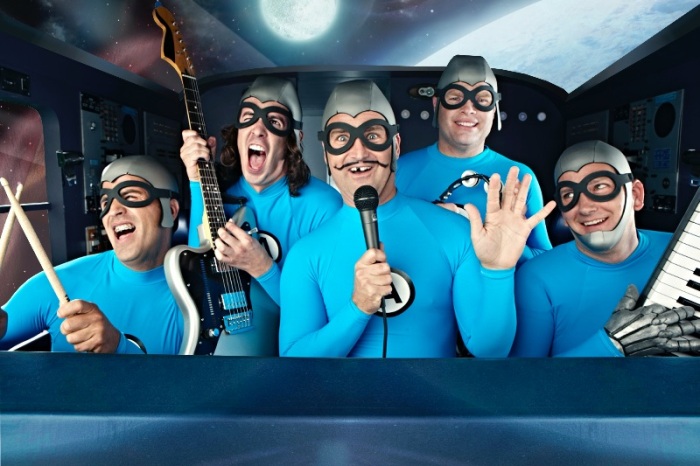 With the world being ravaged from every corner by the darkest  trespasses in various forms, mighty real life cartoon superheroes, The Aquabats, have returned to save our spirits and insanity with their new and 6th album Kooky Spooky In Stereo. Quite simply it is a 100% tonic for the soul; the unbridled fun flushed out by its tracks a surge through the body and trigger to the keenest and most shameless physical animation amidst lustful pleasure. Oh, it is also the best collection of warped ridiculously addictive sonic adventures from the band yet.

With their Saturday Morning TV echoing incitement, The Aquabats! Super Show!, an ever compelling live action temptation, now as webcasts on their own YouTube channel, the clamour for a new album from fans was clearly declared when the band launched a crowdfunding campaign in 2018. Its record-breaking success has enabled the saviours of our reason to insanely grin to produce two new full-length studio albums and 13 web episodes of their cult classic kids’ TV show with Kooky Spooky In Stereo, the band’s first full-length since 2011’s High Five Soup!, a mighty reward for that support.

Flying limbs and mischievous behaviour are immediately summoned by album opener Karate Body!, the call on immature shenanigans irresistible as the spirit of a Hong Kung Phooey/Monkey infests the body under the command of The Aquabats and The MC Bat Commander’s vocal animation. The strikes, spins and twists of the sounds around him are just as manipulative, the subsequent chorus a rousing call to bounce around kicking out. For newcomers to the band, their sound from its initial ska seeding has evolved into a romp maybe best described as Devo meets Reel Big Fish meets Oingo Boingo as The Banana Splits run riot but truly is simply Aquabats uniqueness which at any second here and to come had vocal chords vigorous. 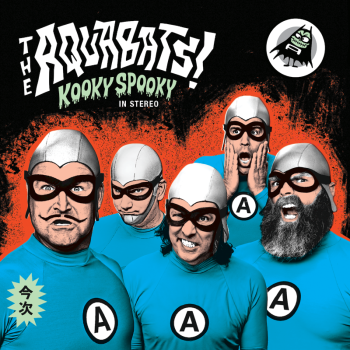 Our addictiveness to Kooky Spooky In Stereo was pretty much instilled by the end of its three minutes or so and indelibly stamped by the following pair of No One Wants To Party! and Skeleton Inside!. The first rides in on a ska bedded caped crusader toned canter, keys and guitars a collusion of flirtation to which vocals and rhythms only add greater seduction of the listener’s involvement while its successor springs from a sinister dub cured lure into another devilishly inducement on body and energy. Its slow swing of a chorus only warms up the muscles for the energetic leap into its spell of a chorus, song and listener in psyche warped union as proven by an office here consumed in sinful movement amid lusty holler.

The first three tracks on the release are easily amongst the most irresistible this year and to be joined time and time again across Kooky Spooky In Stereo but even tracks like the following Bed Head! which maybe lays in the shadows of its predecessors leave the richest fun and pleasure in their wake. The track has an eighties new wave hue to its boisterous stroll, every breath and aspect of its contagion a source of light and smiles while Aliens And Monsters! straight after is a puppeteer for one’s own warped voices and sounds to join those cast from the band’s anomalous imagination.

The Walk Off! is next up and another aspect in the variety of the band’s sound across the album; whereas its predecessor was a mix of power pop and new wave with a punk urgency this revelled in an indie/noise/art pop amalgam reminding ears of bands such as We Are the Physics and Baddies. As the Commander again directs proceedings like a puppet master and the keys of Jimmy the Robot bind ears in melodic intimation, the rhythmic incitement of Crash McLarson’s bass and the swinging rhythm sticks of Ricky Fitness are magnetically dextrous and in the case of the latter on the side of deceitful as his wily strikes whilst leading the body on an energetic stomp almost hide the thick trespass of their impact.

Latest single, Dangerous Leon!  is a calmer pop serenade with its own inherent vivacity, the guitar of Eaglebones Falconhawk infectious and enterprising company with a secret volatility which erupts from time to time. A viral slice of catchiness, the track makes way for Pajamazon!, a glorious ska bred stroll featuring the brass craft and arousal of Prince Adam” Deibert and Boyd “Catboy” Terry and another offering where no way anyone could resist offering their full physical and vocal support to.

The mystical to be denied romance of She’s Gonna Live Forever! had body and imagination bouncing yet again, the track a greedy infection which we could not hold at bay even for a handful of seconds especially with another delicious bassline at its core. Even so it is eclipsed by the album’s greatest moment for us. Sneak Attack! is a glorious cartoon in the speakers, a boogeyman prowling the psyche and igniting the playful fiend in us all. Its 12 Stone Toddler-esque grin and swing was under the skin in mere moments, our vocal support heard streets afar such its diabolical command and fertility of contagiousness.

And that is pretty much Kooky Spooky In Stereo give a couple of extra little moments of pleasure, a release which alone re-sparks a maybe missing smile inside and out in these less encouraging times whilst providing one of the best collection of skilfully conjured and fiercely enjoyable songs likely to be heard this year. The Aquabats are back to save us all!

Kooky Spooky In Stereo is out now; available @ https://theaquabats.bandcamp.com/album/kooky-spooky-in-stereo