Hi and thank you for sparing time to chat with us.

Could you first introduce yourself and tell us how Smiling Assassin came to be?

GEORGE: My name is George Garnett and I am the vocalist for Smiling Assassin, on guitar we have Josh Rogerson, on bass, Casey Stead and on drums, Robbie Johnson. I moved to Hull in early 2018 and set my sights on starting a band. I’d met Josh at uni and we hit it off; I had known Casey for many years so I asked him to join. We started rehearsing at the start of 2019 with me on drums while we searched for a drummer. We’d just about given up on finding one when by chance I met Robbie in a nightclub. We got to talking and by the next week he was in the band.

How would you define not only your sound but the creative character of the band?

GEORGE: There’s a lot of silliness and banter between the 4 of us, we’re all always on a level and never get egotistical. We have a whole lot of character between us, but we have no problem with getting serious and putting in a hard graft where it’s necessary. We have petty squabbles sometimes but there’s always a compromise to be reached and we always get there.

Are there any previous musical experiences for band members and how have they been embraced in what you do now?

ROBBIE: I guess we have all always been into music since we were old enough to walk, personally I’ve been playing drums for nearly 20 years now, I used to be in a band around 10 years ago that did pretty well in the days of Myspace, so I’ve got good experience in that respect. I was actually the last one to join Smiling Assassin so the other dudes already had a tight bond, but I think it was a really good fit and they’ve not kicked me out yet so I must be doing something right.

CASEY: Most of the time George has a song almost fully fleshed out when he brings it to the band. Once we’ve learnt the structure and played it right through a few times, we play around with different dynamics. We analyse each song. How can we build suspense? Maybe lose the rhythm section for a bar or two? Does it have impact when everything drops in again? The finer details like that are where we really work together to keep the songs interesting. It adds a really frantic energy to the album.

Would you tell us about your latest release?

CASEY: For me, ‘Plight of the Millennial’ is your classic call-to-arms punk record, brought into the modern era. It’s heavy, and militant, but at the same time it’s catchy and has enough melody to be accessible. Lyrically the album is as rallying and provocative as it is doom and gloom. I was wondering if it could really be called an album when clocking in at 15 minutes. Is it an EP? But in essence an album (even in a non-music context) is a collection of works that belong together in order to document something. And that’s what POTM does. It’s a snapshot of everything wrong with the world and particularly the UK right now. And it’s so abrupt in its delivery, 15 minutes is all it takes to say “here’s how things are. And it’s really, really bad”. Ultimately, it’s just honest.

What are the major inspirations to its heart and themes?

CASEY: Just the chaotic nature of the times we’re living in…And how millennials get a bad rep, which doesn’t always seem fair all things considered. No previous generation has ever had to grow up in a world where everything is so extremely polarised. And as George emphasises so urgently in the prologue: “we’ve had enough”.

I am always intrigued as to how artists choose track order on albums and EP’s and whether in hindsight they would change that. What has been the deciding factor for you or did songs for the main make the choice organically?

GEORGE: I think we decided on the track order at a rehearsal before we started recording and it just seemed to be the best way about it. The next album will be longer and I’ve got ideas as to how to organize tracks. I’ve thought a lot about how bands had to order tracks for release on vinyl so I think splitting the album into 2 parts is a good starting place.

What do you find the most enjoyable part of being in a band and similarly the most cathartic?

JOSH: For me it’s got to be just being in the rehearsal room and crafting a song because there will be a riff that one of us comes out with and we share a moment of “this is gonna be good”, then the ideas come out, eventually forming into something we wanna play live.

For anyone contemplating checking you out live give some teasers as to what they can expect.

ROBBIE: Pretty wild and explosive shows to be honest, our fans over here have proven themselves to be pretty loyal so far and things can get messy to say the least. We sometimes give out free merch and George has been known to initiate a fight to the death for the last T-shirt. But jokes aside we are all pretty chill so if you do come to a show please come and talk to us!

What has been your most thrilling moment on stage to date?

CASEY: We played an anti-austerity gig with a really mixed line-up. So the audience was a very mixed bunch too. The event was all day and we were on at the end of the night, so we weren’t sure if people would stick around. But they sure did, and everyone loved it! It was a crazy show with amazing energy, so it was a real thrill winning over an audience that was entirely new to us. The venue was cool, but their set-up wasn’t great, so we really had to persevere, and that totally added to the fun. We played our hearts out, and I loved every second.

Though it is hard to plan in the current climate after lockdown, have you any live dates scheduled?

ROBBIE: We had a few dates lined up before lockdown which unfortunately got cancelled. There’s an all day festival in Hull raising money for a charity which has been pencilled in for December. Who knows when things will return to “normal”…But one thing’s for sure, we have been getting a lot of interest and have already been asked to play with a number of bands post corona apocalypse, so a few tours next year are definitely on the cards!

What else can we expect in the near future? 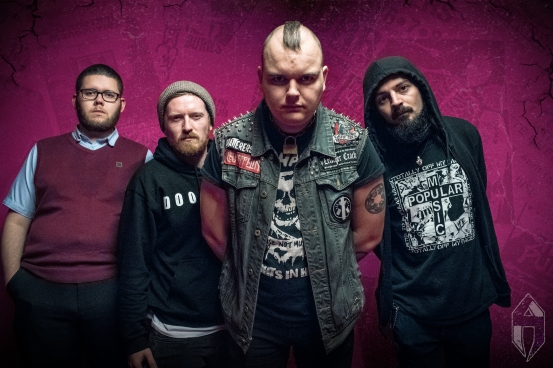 JOSH: You can expect a lot of gigs and new material, our vocalist George is churning out song ideas like a machine. A tour is also definitely on the cards for us as a band with all the interest we’ve gained this year.

What are the major inspirations to you sound wise and as a musician?

GEORGE: I listen to a whole lot of thrash metal, crossover and American hardcore punk. Bands like Misfits, Dead Kennedys and Municipal Waste have the biggest influence on my writing, which ultimately has led to a lot of rapid riffage and socially and politically charged lyrics.

And finally what song or release would you say was the spark to your passion for music?

JOSH: This is a difficult one, but I’d have to say that it would be the first Madness album; my dad was always playing that when I was younger and it must have sparked my passion for music and definitely started my love of Ska, but long story short, it’s a great album that showed me not all music is sub-par chart music.

Many thanks once again; anything else you would like to add?

ROBBIE: Just to thank you for the interview and helping to support our shitty little band! If anyone is interested they can buy our debut album ‘Plight of The Millennial’ through our website https://www.smilingassassin.co.uk and hit us up on all the socials, we plan on being around for a while.

Check out our review of ‘Plight of The Millennial’ @ https://ringmasterreviewintroduces.wordpress.com/2020/06/05/smiling-assassin-plight-of-the-millennial/