After the release of their well-received debut album, Twist Your Bones, in 2015 The Mojo Slide with praise  still wrapping their ears have spent the past few years working on its successor. This September sees its highly anticipated release and we can only say the time spent writing and creating its thirteen track body has been rewarded with another compelling engagement with the UK rockers.

Sent over courtesy of the nimble fingers of radio plugger extraordinaire, Emma Scott of Pluggin’ Baby, we swiftly found Manic Panic expectantly embracing the rock and blues instincts of the band but immersed  in one multi-flavoured, dirtily toned rock ‘n’ roll adventure. It builds on all the enticing qualities of its acclaimed predecessor, embracing them with richer imagination and bolder enterprise as darkness and light entangle in word and sound. It is an evolution which swiftly hooked attention as the Cambridgeshire quintet gripped ears with their album’s opener.

Good Man Down opens up its lures with a psych rock like flowering from within which an appetite erupting groove strides forth.  As the song hits its potent stroll, further fresh grooves erupt around the alluring tones of vocalist Mark Wilks, infection soaking their temptation and similarly the rhythmic shuffle fuelling the contagion. 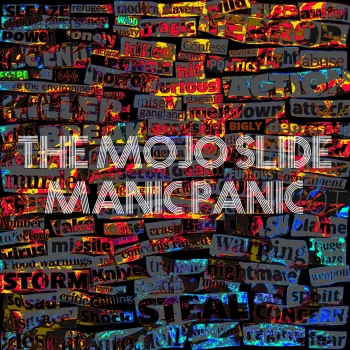 The Mojo Slide’s current and recent singles are next up keeping that highly infectious start going with Not In My Name first to step forward. Again its first bait is centred by skilfully flirtatious grooves, the lead guitar of Mike Fenna weaving a potent line wrapped in the melodic hooks of fellow string coaxer Matt Legg. The song is superb, the punchy stroll of Michael Graham’s beats and the darker growl of Dan Savage’s bass just as virulent as the swing of guitars and vocals. When reviewing the single we declared the track sunk under the skin with ease, and fair to say that the ridiculously infectious encounter has only become more manipulative and anthemically rousing ever since and especially in the environment of Manic Panic.

Good Times brings a sixties garage rock breath to its sunshine climate next, equally a Brit pop essence unites within its infectious saunter headed by the ever inviting tones of Wilks. It is that kind of mix with continuing variety which lights up the whole of Manic Panic, each track sharing their individual weaves but with an enterprise epitomised by this magnet of an encounter. Lively in spirit and body, the guitars alone a bed of craft and catchiness, the song is a rich intimation of hope and optimism around its theme of anxiety and depression, again light and dark skilfully woven together.

In turn Catch Me If You Can casts a web of grooves which just hook attention; their blues breeding an intoxicating lure which vocals and rhythms eagerly align their own enterprise to. There is certain volatility within the song which erupts through Wilks and the energy of the track though its animated composure is ever in control as darker deeds are exposed before Wandering Breeze shares its dark rock contemplation. With a touch of The Filthy Tongues to its breath, the song is a western coated bed of suggestion and equally evocative sound the imagination swiftly danced with.

Next up is Fallen Angel, a song which did not quite inflame the passions as those before it but revelled in and exposed further the creative prowess of the band and the magnetic potency of their varied sound; another simply holding keen attention while Now I’ve Gone is a rich slice of lyrical intimacy and melodic drama which seduced in quick time and only enthralled thereon in.

Both again brought greater depth to the band’s sound and album, successor Big Black Hole following suit with its dark bass led saunter and fiery clad swing as melodic and blues rock entangle with indie nurtured enticement. It too is a song which grew in stature by the listen though soon outshone by the outstanding pair of Voodoo Eyes and I’d Do Time For Daisy. The first also adds a tinge of the sixties to its bait, pop flavoured hues this time plucked from the decade into its virulent R&B scented rock ‘n’ roll while the second is pure temptation from its acoustically woven opening and vocal description through to its punk inflamed eruption and subsequent feral rock stomp. The track needed barely a minute to stand alongside the album’s second offering as favourite track contender though they in turn are quickly challenged by the Pirates meets Stones like saunter of To Kill A Monkey. With spicy keys and flame spreading harmonica around instinctive grooves and melodic temptation, the track was a rebel rousing party in the ears.

The final pair of Lost Cause and The Lost Ship Of The Desert bring the album to a fine close, the former a fiery but composed slice of rock with unpredictability and discord in its character and heart which bubbles and teases without fully erupting with magnet success. The latter is a swarthy blues swept seduction, dark shadows and emotive intimation brought together in Wilk’s words and tones as well as the melodic alcohol of the guitar’s enterprise. It is another tale and song which truly blossomed by the listen though it quickly seized strong attention and another which reveals how striking, worldly and emotionally observant, and creatively bold The Mojo Slide has increasingly become.

We may have had to wait five years for their second full-length but Manic Panic was well worth the wait.