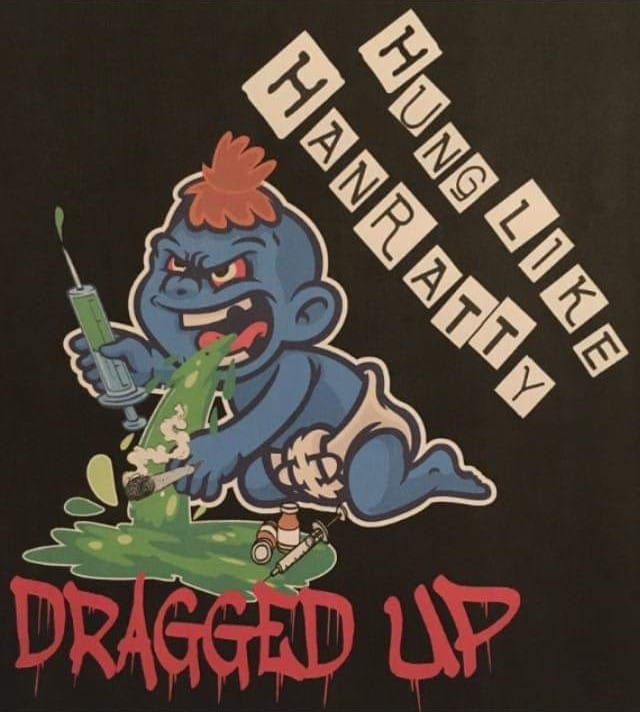 Virtually two years ago we were personally bitten by the virulent bug that is the sound and mischief of Hung Like Hanratty. Now as the world toils under a different invasion they return with a new album and a feral dose of their inimitable punk rock to invigorate and fire up the spirit.

Dragged Up is a 15 track assault of the UK outfit’s creative trespass but so much more than a repeat of the goodness and devilment which made its predecessor, What You See Is What You Get, so revered and acclaimed not forgetting devoured. Their new roar of irritancy, belligerence and devilment is simply insatiable rock ‘n’ roll, the Sutton-in-Ashfield hailing band’s sound at its broadest in adventure whilst still erupting from an old school punk heart. Riffs are hungrier, rhythms more imposing whilst hooks are keener than those swinging in a draughty butchers shop and just as invasive; it all a manipulation which had us dancing like a puppet on their creative strings.

Released on their own Ratty Records, Dragged Up instantly uncaged its prowess, intent, and richer rock ‘n’ roll sound through opener I Hate The World. From the moment frontman Al Sation roars his discontent, to be swiftly joined by a ravenous tide of riffs and rhythms, attention and appetite were just as hungry. It is pure incitement sure to bring others, like us, vocally and physically in on its contagious tirade. Wired with citrusy melodic threads from guitarist Liam ‘Valiam’ Smith as fellow string picker Ricky ‘Rick Ettes’ Barsby rummages through the psyche with his driven riffs, the track set the moment and day afire with ease, a temptation only escalating as the album bears its enterprise.

The following Twat On A Bike proved just as relentless in its persuasion, its vintage punk heart almost Damned like whilst surrounded by another flood of merciless catchiness. As someone who lives in an area thickly suffering from wheeled menaces, the track hit the spot in many ways with the bassline of Tez Tickle devious temptation in its midst.

Hung Like Hanratty has proved potent whether raging against a body of broad and intimate prejudices and issues as highlighting certain characters within society. Duggie The Druggie is a fine example of the latter, a track which with great rhythmic coercion and melodic coaxing immediately got under the skin. The beats of Kyle ‘Kye Bosh’ Ellis continued to drive song and listener movement as the imagination got caught up on the lyrical swing of Al and the melodic enterprise of Valiam.

Hooks again virtually seal the deal alone within the album’s following title track; the slapping down of presumptive prejudice and firing up of a pride of one’s roots fuelling its defiance while Fuck With Me And I’ll Block You On Facebook deals with the obvious suggested in its title with equally tempting surges of sonic and rhythmic infestation. Even at this relatively early point in the album never has the band unitedly and individually been as creatively sharp and almost menacingly imaginative as they are or Al as rich a rousing protagonist in the voice and heart of songs.

Both Inland Revenue and Mr Hypacondriac echo that thought, the first not for the first time within the release embracing a hard rock esurience to its punk heart whilst its successor is even bolder in its flavouring and virulent contagiousness. As with all tracks, there is no escaping the urge to join in on their incensed roars and indeed to do so with ferocious energy to match that of the quintet. Both tracks are superb, the album continuing to keep us breathless and greedy with Epsteins Diary only adding to the zeal in creativity and listening; it another track which tells you all you need to know of its target and attack in title.

Through Same Shit Different Day and Marching On participation and pleasure is only escalated, the first a barbarous rile against the monotony of modern life and another glorious sing-a-long incitement with the second a ravenous trespass of craft and manipulation. The latter stakes claim to one of our biggest favourite moments within Dragged Up, its initial tide of grooved riffery instinctive manipulation and the subsequent choppy swing of guitar led teasing irresistible. It easily steals best track on the album though has to share it eventually with the final song on the encounter.

Before then Dr White as it snarls against medical snobbery, Shift It with its fiery agitation and the raucous rock ‘n’ roll rebellion of Puppet Government simply had us leaping and roaring in unison and pleasure. Again the trio revel in the new growth in flavouring, craft, and creative deviousness in the band’s punk rock before Vets Hate Pets slowly builds its ire, gently baiting thoughts and the protagonists in its aim before leaping upon them with nostril flared, contagion again soaking every riff, rhythmic swipe and vocal holler and every cycle within becoming more viral than the last.

Never has a song brought sadness and pleasure in such equal force than the album’s final offering. Living For The Weekend features the Dave Greenfield of The Stranglers, the song seeing the final time the late great man was in a recording studio before passing away from the Covid virus. It would not be wrong to say that the album is worth buying from the track alone and never have we been more certain a song should be released as a single. Distant sonic smog brings forward the inimitable strains of Dave’s keys, his genius fingers dancing over keys to quickly bind us in joy and memories. Around him though Hung Like Hanratty are just as pumped up in style and craft, the track virulent rock ‘n’ roll in its most potent form in a celebration of a time so many get to rejoice over after the working week whilst simultaneously giving the world a final goodbye of a true legend.

A glorious end to a thrilling release which proves Hung Like Hanratty one of the UK’s punk and indeed rock ‘n’ roll musts. We must also mention that in a few weeks the band will be releasing a new 7” vinyl single written in tribute to Dave Greenfield, Fly High With The Ravens dedicated to their great friend with a portion of the profits going to one of Dave’s charities. Before than though grab Dragged Up, we doubt there will be few punk bred encounters which will eclipse or even match its glory this year.

Dragged Up is released via Ratty Records on August 15th with Fly High With The Ravens scheduled for release on October 31st. Ordering available through https://draggeduphlh.bigcartel.com/

Tags: Dave Greenfield, Dragged Up, Fly High With The Ravens, Hung Like Hanratty, punk rock, Ratty Records, RingMaster Review, Rock 'n' Roll, The Damned, The Stranglers, What You See Is What You Get