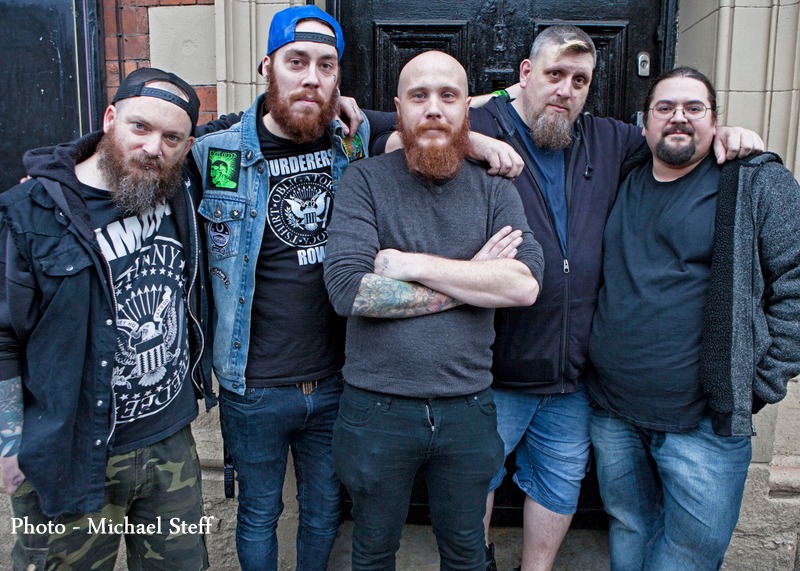 The past two years have seen UK rockers Kid Klumsy leave a potent mark on each and the national punk scene with rousing riots shaped as EPs, 2018 seeing Spit Your Dummy Out a romp of mischievous antics with the following year’s Singing Our Souls showing itself just as manipulative and irresistible. Keeping up the spirit enlivening habit, the band is about to set The Faces Don’t Fit on this year, another incitement of prime rib fun, enterprise and punk devilment.

Coalville, Leicestershire based, Kid Klumsy share six tracks upon The Faces Don’t Fit which are bred in the band’s familiar punk instincts and character but equally bearing evolution in their sound. It opens up with Boobs and instantly the bands expected mischief is in full play as they survey the focus of the song’s title. Tongue in cheek apologies align to swinging hooks and an animated bassline from Alistair which instantly got under the skin. Similarly the familiar tones of Weab only escalate the punk ‘n’ roll contagion already fuelling the track while the guitars of Carl and Matt spin a web of temptation as the bands eyes wander and struggle with obvious reactions in a typical viral Kid Klumsy chorus which easily whipped up participation.

Driven by the ever persuasive rhythms of drummer Jamie, the track is prime Kid Klumsy and an addictive start to a release soon showing its adventure as Don’t Count On Me entices and intrigues before erupting from its singular guitar beckoning into a ska kissed, pop punk scented and boisterously delivered stroll. Again there was no escaping the influence of body and vocal chords as the song nagged with every riff, rhythm and flavoursome melody. 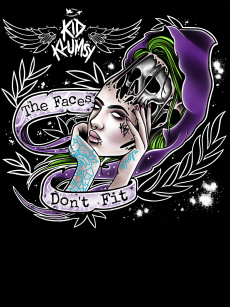 Little Boy Thursday follows and straightaway Weab and co arouse ears with a vocal chorus which soon sparks another compelling canter, one as predacious in sound as it is virulent in catchiness. Once more riffs and rhythms collude in contagious harassment as from time to time hard rock tendrils erupt from guitars while The Lost Art revels in another weave of rock ‘n’ roll as much hard and classic hued as punk and garage. Though devilment soaks the lyrical side of the band they also highlight issues and traits we all come up against or slip into, the song one such protagonist within its multi-flavoured and increasingly magnetic body.

Fiercer aggression floods Soup, the track a fusion of old school and hardcore nurtured punk with again more hard rock bred essences. It is a relentless brawl but one aligning bitter beats with swinging rhythms and sonic causticity with melodic resourcefulness before Kid Klumsy break out a great punk infused version of The Housemartins’ Caravan Of Love. Without losing the melodic prowess and virulence of the original, the quintet gives it a snarl and feral charm which firmly and swiftly hit the spot.

The song is listed as the final offering from The Faces Don’t Fit but joyfully there is another track to grab ears on the release. Not mentioned on the artwork, the band present a cover of the Pete Shelley written Yesterday’s Not Here, a song recorded for a proposed covers album of the late Buzzcocks legend to be issued on Secret Public Records initially as a digital download and at a nominal price with proceeds benefitting the Pete Shelley memorial campaign. Featuring Rachel Reeves from Murderers Row on lead vocals, the track similarly has an untamed and raw breath to its tempting and as its predecessor ignites the senses and imagination with relish whilst adding another compelling and fresh aspect to the EP, one easy to hope we hear again with maybe Reeves and Weab in a more equally unleashed roar.

And that is The Faces Don’t Fit, another thoroughly enjoyable and rousing adventure with Kid Klumsy keeping up a rather fine tradition of the band leaving a year with one memorable romp.

The Faces Don’t Fit is released August 1st on CD through STP Records with pre-ordering available @ https://www.stprecords.org/ and digitally across most stores.

For bands wishing to submit to the Pete Shelley Tribute album go to https://www.yesterdaysnothere.co.uk/