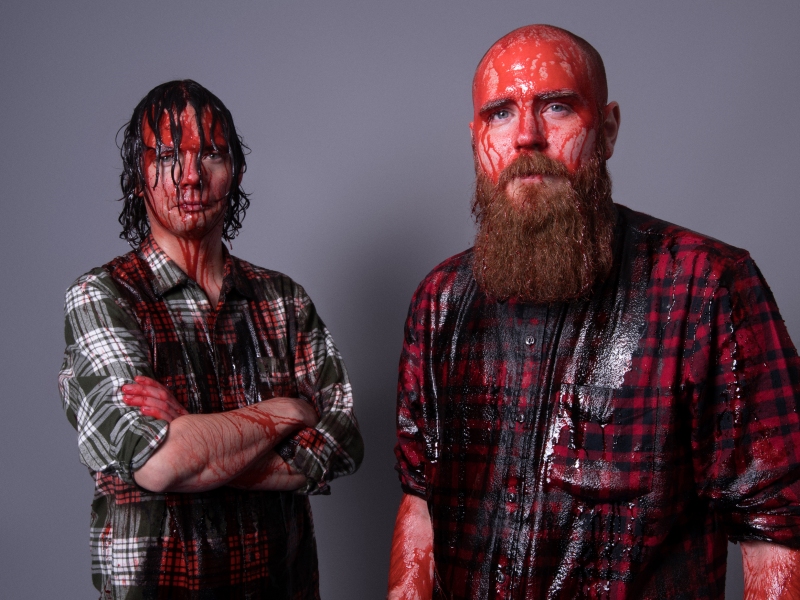 In many ways it feels inevitable that we would be drawn to the debut EP from UK outfit ManDown and that we would find an eager appetite for the duo’s resounding sound but of course nothing is ever guaranteed in life apart from the final breath. We Want Blood though made short work of persuading ears and attention, the release a thickly rousing and intrusively thrilling encounter which should equally have little problem firing up hordes of other new fans.

That feeling of inevitability comes from the histories of the two behind the band, guitarist/vocalist Iain Turner and drummer Lawrence Arnold. Close friends since childhood, the pair began making music while learning classical guitar together in senior school, indeed actually recording an album there which they sold to school mates. Though remaining in contact, the pair took individual journeys in music across various bands with Arnold coming to play in Ipanema, a band which grabbed our attention at the time and fronted by Darren “Wiz” Brown of Mega City Four, Serpico, and Ned’s Atomic Dustbin fame. It was Arnold’s next band, Welcome the Howling Tones, a stoner blues band he formed with Paul Townsend of Hundred Reasons, which really hit the spot. The duo soon brought Turner into the fold, the band subsequently recording one of our favourite albums in Green & Blues. Its success led to tours with the likes of Godsized, Nick Oliveri, The Icarus Line, Breed77 and The Jamie Lenman Band who would later feature in the emergence of ManDown. 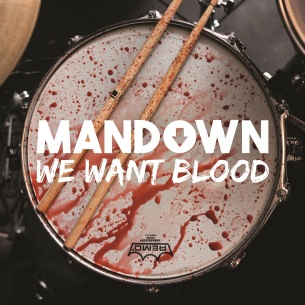 The former Reuben frontman/songwriter, that band one our lustful passions, caught the duo practicing for a new project and came up with the moniker which was eventually adopted by ManDown. He also provided songwriting support and suggestion in the studio when the band recorded the tracks making up We Want Blood with producer Chris Coulter (IDLES, Arcane Roots, Jamie Lenman, Sun Arcana, EMP!RE). So for us all the ingredients were there to get hooked up on ManDown but the proof is in the eating, or the hearing in this case and the band’s first EP had no trouble in its persuasion.

The pair’s sound is a post hardcore nurtured roar but quickly proves a much more diverse and flavoursome affair within the EP’s opener alone. Try Or Die rises on a sonic thread, one soon rapped by the biting beats of Arnold and in turn joined by the stirring tones of Turner. It swiftly erupts in a surge of riffs and rhythms wired by an invigorating groove, one which was soon under the skin as the band’s imagination quickly simmered to the boil, the track twisting and turning throughout its eventful body. Equally a pungent holler of intensity and tenacity, the track quickly made for a striking and compelling introduction quickly matched its following companions.

Tick Tock follows and immediately is a twisting and turning spiral of sound around rhythmic fertility with Turner similarly magnetic in his vocal incitement, his delivery and words flirting with the imagination as ably as the resourceful sounds around them. With a carnal edge to its grooves and textures, the track gnawed at personal instincts and a passion for such predation but similarly as those around it presented a spice of unpredictability which was inescapably captivating.

The calmer entrance of Kiss is soon struck by shards of sonic tempestuousness, the cycle repeated before things erupt in a creative tempest, a passage again repeated as the track gripped attention. It is hard to know how strong an input Mr Lenman made in the growth of songs in the studio but there are certain moments which seem to carry his uniquely creative scent, this mighty moment maybe the most suggestive as it left another indelible mark on the imagination.

The EP closes out with its title track, the song almost predatory in its entrance and increasingly addictive in its sonic aggression and enterprise thick exploits. It too chases expectations from the scene, taking surprising and invigorating turns in the course of its richly arousing and persistently gripping presence.

As we said maybe it is no surprise that We Want Blood hit the sweet spot with us but truth to say it deserves every plaudit given its way. The EP is an impressive and fiercely enjoyable encounter and ManDown another fine maybe destined to be the finest adventure with Messrs Turner and Arnold yet.

We Want Blood is available now @ https://mandownrocks.bandcamp.com/album/we-want-blood as a name your price download.

Like Loading...
‹ Little King – Occam’s Foil
Talking under the lure of Pale Blue Moon: an interview with frontman Shane Kelly ›