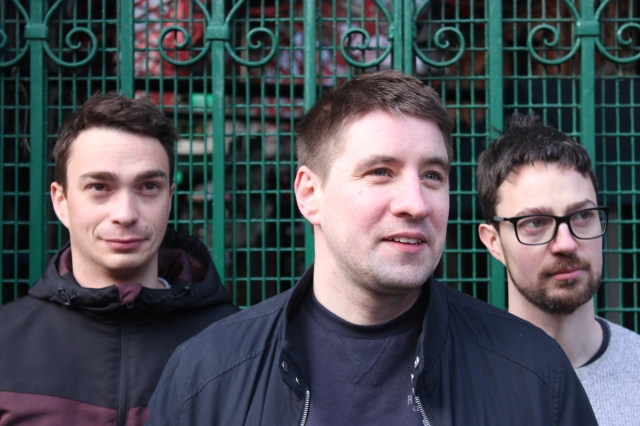 It may not be as obvious as Manchester, Liverpool, or Bristol for producing great bands but over recent years we have found that Cavan in Ireland has been doing just that, our ears captivated by the likes of The Radioactive Grandma, Juggling Wolves, Ape Rising and Fertile Reptile among many. Now we add The Spiritual Leaders to the list, an indie rock trio which as their new mini album shows offer a rich and varied palette of sound.

The Spiritual Leaders consists of vocalist/guitarist David Reilly, lead guitarist/bassist/keyboardist Fergus Brady and drummer Cathal Brady. The band released a self-titled debut album in the closing weeks of 2012, a record introducing a sound seeded in the inspirations of artists such as The Smiths, Radiohead, Joy Division, New Order, Whipping Boy, Pixies, Stone Roses, The Beatles, The Rolling Stones, Jeff Buckley, and Van Morrison but as within latest offering Albania Away bears its own individuality. 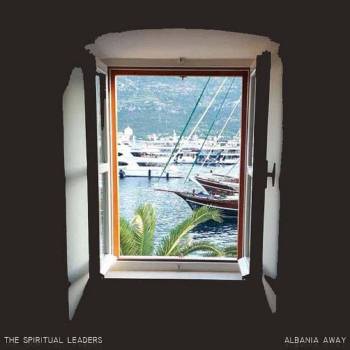 Recorded and produced by Rob Newman (Therapy?, Pet Crow) in Snug Recording Studios, Derby, Albania Away quickly fascinated with opener Picture on the Wall. An electronic thread led to a lively rhythmic shuffle and subsequent melodic jangle with an eighties indie hue. As Reilly’s vocals join the temptation the swing of the track is in full command, the song catching the imagination with its Lloyd Cole tinged character and boisterous sound.

Fatten the Calf follows and it too embraces an eighties indie/new wave lining around its infectious swing led by the seriously magnetic bass. Though seemingly slim in its textures, the wonderfully unpredictable song is a thick weave of enterprise and post punk nurtured suggestion while next up You Know Me bristles with more muscular rock ‘n’ roll attitude and a matching physical touch yet also has tinges of that post punk breeding within discord spun enterprise akin to The Pixies.

Predominantly instrumental, the outstanding Bell Jar is a captivating slice of melodic intimation with XTC-esque radiance to its atmospheric stroll while Temporary, which features Barra McGuirk on lead guitar and synthetic strings, made for beguiling acoustic companion, its stringed serenade a haunting pleasure.

Underwater With You superbly completes the release, initially an electronic teasing which is soon bound in melodic guitar wires alongside subtle but equally fertile rhythms and voice. It too has an evocative quality, an atmospheric air coloured by the band’s craft and imagination.

With every listen Albania Away captivated and fascinated with increasing strength, ears increasingly seduced by each passing minute; The Spiritual Leaders giving more proof that though still a relative secret beyond its borders Cavan is a hot bed of unique sound and real pleasure.