Snuff – The Wrath of Froth 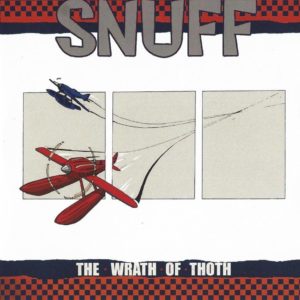 For more than three decades the UK has been infested by the punk based assault and roar of Snuff; releases, gigs, and critical acclaim in abundance accompanying  their relentless trespass on the mundane act of living which even when the band disbanded was still a lingering raucous nagging. Even as time and the years move on, the release of new EP, The Wrath of Froth proves nothing has changed, the band still one of the most compelling incitements within the British feral rock scenes and their sound one of the most irresistible.

With the current line-up of remaining band founder and drummer/vocalist Duncan Redmonds, guitarist Loz Wong, bassist Lee Erinmez, trombonist Oliver Stewart and Lee Murphy on his Hammond organ, in place since 2011, Snuff have continued to blitz and thrill the senses with the albums, 5-4-3-2-1-Perhaps? in 2013 and last year through There’s A Lot Of It About. Across the years their sound has certainly grown and embraced greater variety to its punk breast as proven by those releases alone and now The Wrath of Froth, factors which have only gone to breed a belligerently unique sound.

May was set to see Snuff ravage Britain on tour to support the release of The Wrath of Froth but of course those plans have had to be cancelled, being rescheduled from January 2021. The release of the EP is more than enough to relish and be over excited over though and immediately rewards such attention as it opens up with Drink Freely From The Chalice Of Lunacy. Inviting chords immediately had ears at attention, rhythms jabbing with equal temptation as the track opens up its earthy punk roar. Redmonds’ tones are just as gnarled and magnetic as they fuel the track with greater passion and attitude; its rock ‘n’ roll infectiousness similarly rousing.

Nothing To See Here follows the commanding opener, its initial lure intrigue wired and leading to a swiftly addictive, hook swung pop punk styled holler which fair to say eclipsed its predecessor for us. Essences of rock ‘n’ roll and ska punk line its raucous stomp; garage rock and power pop similarly a potent scent in its contagious character and antics before Conductor 71 unleashes its irritable hardcore infested punk ‘n’ roll. It too simply had us roaring and bouncing in tandem to its bruising virulence, rhythms alone a harassing incitement matched in persuasion by the insistence of vocals and voracious riffs.

Murphy’s keys seduce throughout with their ever distinctive temptation and make for a particularly lusty lure within the viral call of Poetic Nonsense, though the track is thick in bait and manipulation from every angle and unleashing of individual craft while it is fair to say the show stopper within the EP has to be for personal tastes, The Bells of Hell go ting-a-ling-a-ling. With bass and guitar laying down their ska induced bait, appetite was instantly chomping down, even more so when the punk devilment and vocal rascality of Redmonds raucously backed by the band descended on the passions. Mischief breeding, the song is one of the moments which proves as much puppeteer to the listener’s senses and body as entertainer.

EP closing King Of The Wild Frontier is no lightweight in that kind of inescapable influence either, again tongue in cheeks as alluring as the make-up of the song’s richly flavoured sound further lit by the skilled blasts of Stewart’s trombone.

With one listen at any time never enough, The Wrath of Froth is punk and rock ‘n’ roll at their combined best and Snuff as irresistible as ever, indeed maybe at their most addictive yet.

The Wrath of Froth is released on 10 Past 12 Records/Unless You Try Records May 18th with pre-ordering available @ https://snuffband.bigcartel.com

Orange and green vinyl versions of the EP are already sold out but check the website out for repress details when available.