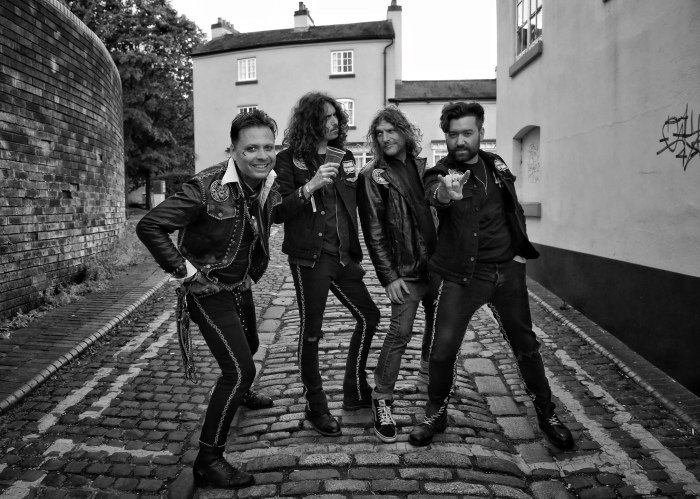 With US hard rockers Bullets And Octane you pretty much know what you are going to get, spirit rousing air punching rock ‘n’ roll yet that familiarity has not prevented each of their albums evolving a sound increasingly slapping down  its own individual character and roar; one which certainly has got deeply under our skins, as for so many others. Riot Riot Rock N Roll is no exception, the band’s new album living up to its title with relish to be the most aggressive and compelling offering from them yet.

Predecessor Waking Up Dead stirred a whole new width of global attention with its release two years back and led to 5 European Tours and a US tour for the St. Louis originating quartet as well as shows with the likes of CKY and numerous festival appearances. Bullets and Octane did extensive touring for the album while opening slots for CKY and festival appearances at Malmo Festival in Sweden and Call Of The Wild in the UK only built upon an already rabid fan base. During that time on the road the band wrote their new album and you cannot help feeling that the adrenaline of such intensive gigging has been an inspiration to the almost pugnacious energy and lusty boisterousness behind Riot Riot Rock N Roll.

The album drives in on a barrage of beats, each a bitch slap on the senses as riffs equally gear up for the attack of its title track. When it erupts full force it is a demandingly infectious affair; an immediately gripping groove wrapping a contagion only accentuated by the familiar and rousing tones of vocalist Gene Louis. The infection is in full virulence across the quickly erupting chorus, gang vocals adding to the anthemic incitement as the track’s manipulation descended upon and used body and vocal chords like a puppet. The song is superb, guitarist Felipe Rodrigo casting web of hook littered temptation as the rhythms of bassist Zachary Kibbee and drummer Jonny Udell direct the rousing affray. 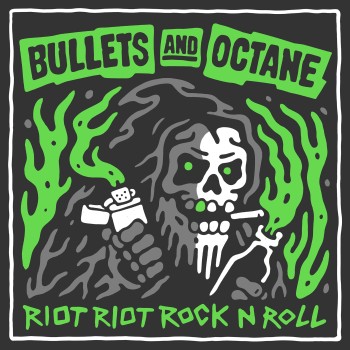 The stunning start is quickly matched by new single Ain’t Gonna Be Your Dog a song co-written with ex-Buckcherry guitarist Keith Nelson. It too instantly had a firm grip on attention, its vocal and sonic blast taking hold to pave the way for a subsequent more controlled but no less captivating stroll equipped with senses clipping riffs and crisp beats.  That reserve also hugs Louis’ vocals though unsurprisingly it only leads to a chorus which erupts like a fire dosed up with gasoline before the cycle returns with fiercer melodic flaming and boisterous catchiness.

The Devil springs its robust rock ‘n’ roll on ears next, riffs and beats colluding with a meaty appetite inflaming bassline as again vocals anthemically holler. As with the previous pair, there is no escaping the call and want to join its howl and swing to its creative clamour before Give Me A Reason brings something akin to pop punk meets alternative rock infection to its hard rock shuffle. Four tracks in and each has trespassed the passions with individual voices and enterprise, a trait just as potent within the deviously addictive As The Bombs Fall. Reminding a little of UK’s own Senton Bombs, the track also fuses rock pop catchiness to its muscular stomp; rhythms a punchy manipulation in the voracious bait offered and again devoured.

A touch of glam rock is courted by next up Addicted To Outrage, old school rock ‘n’ roll also embraced by its instincts as the predacious song prowls ears before swinging to its own viral dynamics and exploits to breed another major highlight which Heaven Can Wait matches with a less intimidating but no less aggressive saunter bound in lively hooks and melodic dexterity all matched by the vocal prowess of Louis and the band.

From its first surprise carrying breath Chaos was manna to the ears, the track a boozy, body swinging flirtation that infested the passions like a Central European enchantress with all the fire and vitality of a warrior. It sealed favourite track in mere moments, bawling at and romping with anyone around it leaving Rooftop Tears plenty to do to pick up an exhausted companion which it surely did in no time as Kibbee’s heavily breathed bassline stomped through ears amidst the similarly tempting sentiment loaded tones of Louis. There is a touch of Grumpynators to the track which only added to its pull and the rock ‘n’ roll pleasure feasted upon.

The album comes to a close with Lost Crazy Psycho, a track with a title that tells you all you need to know about the slice of galvanic schizo rock quickly leading the listener into inhibition free shenanigans. It is also another song which revels in the craft and imagination of a band which has uncaged their most eclectic and unique not forgetting thrilling album yet.

So do you really want to miss out on the riot?